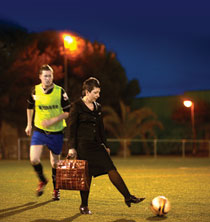 Businesswoman Gulnara Khanbabayeva tells Visions of some unlikely links between Azerbaijan and Spain.

How long is it since you left Azerbaijan?

I left Azerbaijan 31 years ago. Before Spain, I lived in Russia for a long time. And I’ve been living in Spain with my family for five years now.

How difficult is to live among people of a different culture and traditions and to get used to that environment?

I’ve never had any problems either in Russia or Spain with regard to language, religion or traditions. I am grateful to my parents for this, because they brought me up in such a way that today I can be friends with anyone, regardless of their faith or background.

Do our two nations – Azerbaijan and Spain – have anything in common in terms of psychology or way of thinking?

Of course, there are similarities between our nations. Like Azerbaijanis, Spanish people are respectful towards older people. They are compassionate and hospitable. I should also mention that our people look very similar too. Thanks to these similarities, from day one here I have never felt as though I were in a foreign country.

How did you become involved in public activity in Spain?

This is the backstory. In 2007, I went to the Azerbaijani embassy in Madrid on personal business. During the meeting at the embassy, it was suggested to me that I establish a society in Valencia, the city where I was living, with the purpose of strengthening the bridge of friendship between our nations, promoting Azerbaijan in Spain and, at the same time, allowing our compatriots living in the city to get to know each other better. Of course, I took this suggestion seriously and began thinking about it. As soon as she heard about the idea, my mother encouraged me to set up the society as soon as possible. Exactly one year later, I made my mother’s wish come true: in 2008, the Elmira Azerbaijani-Spanish Friendship Association was registered in the appropriate agencies and has been operating for five years now.

As well as my public work in the association, I am also an active member of the Partido Popular, the governing party in Spain. I am the assistant to the party president of the Cuitat Vella region, elected for four years. Besides, I have been president of the Valencia Human Rights Protection Federation for three years now. 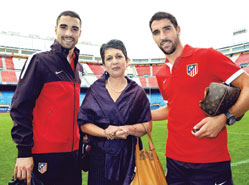 One of your most interesting roles is as founder and chairwoman of the Spanish football club CF Baku de Valencia until May 2012 and, since 2012, as chairwoman of Baku Hellin Deportivo FC. How did this happen?

The Elmira Association had been working for a year when I had a phone call from the Valencia executive authorities to invite us to take part in a tournament for amateur football teams connected to the various nationalities living and working in Spain. Even though our society didn’t have any sports teams, I didn’t reject the offer and said that we would take part. Immediately after the phone call, I got down to setting up a temporary football team for the tournament. To find players, I went to the area of the dried up Turia River bed in Valencia, where football pitches have been laid and are used for free by amateur footballers. Young Spanish people and immigrants from various countries play on these pitches and dream of a career in football.

So without any idea about the game, I chose some of those young people and established a temporary team to compete in the tournament. Our team played against teams from societies or associations of Spain, Azerbaijan, various African countries, Arabia, Palestine and Argentina. We came second and were awarded a cup.

After the tournament, the young Russian players asked me not to disband the team but to set up a permanent football club. When I saw how interested these young people were in football and thought that their future happiness might depend on me, I did as they wished and set up the Baku de Valencia football club. The Spanish and foreign press described it as an international club and an example to others. I would also like to mention that I am the only immigrant woman to own a football club in Spain. Baku de Valencia was officially registered with the Football Federation of Valencia. It has been playing for four years now and is in the 7th category based on the divisions in Spain.

After that, on 2 May 2012, I was appointed president of Baku Hellin Deportivo. The club was set up in the city of Hellin in Albacete Province. Our club plays in Spain’s 3rd National Division and we also have a youth team playing in the national league system.

We all know that sport can play an essential role in promoting a country abroad. So, as president of a football club and an Azerbaijani living outside the country, I always try to raise Azerbaijan’s profile in the world. In all the work I do, I try to promote Azerbaijan, its national traditions and achievements in foreign and domestic policy. 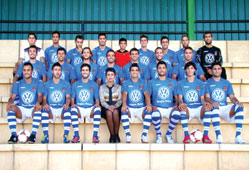 Gyulnara Khanbabayeva with the players of Baku Hellin Deportivo, October 2012

Are you a keen fan?

I never liked football before, but when I had my own team I fell in love with it. Business commitments permitting, I watch all the Baku Hellin games from the stands and have to admit that I do get carried away sometimes. At least I can express my frustrations in Russian or Azerbaijani, if I don’t want people to understand what I’m saying.

The club’s name must sound strange in Spain. To what extent are people interested in our country and our capital?

Our club’s name really is a surprise in Spain. Let me tell you why we are called Baku. Our National Leader Heydar Aliyev said that, Azerbaijanis living abroad, wherever they live and whatever they do, should never forget that they are Azerbaijanis. Inspired by that, I gave the name Baku to both clubs – Baku de Valencia and Baku Hellin Deportivo.

Since I started running Baku de Valencia and, now, Baku Hellin Deportivo, the number of people in Spain who know about Baku and Azerbaijan has been increasing day by day. Just imagine that during the games and whenever we score, all the Hellin fans chant “Baku! Baku!”

Does the club have any Azerbaijani players?

We still don’t have any Azerbaijani players. However, I’m sure that as soon as we’ve got over our financial problems with the help of well-wishers, we will be able to see players from Azerbaijan at Baku Hellin Deportivo.

You are still head of the Elmira Azerbaijani-Spanish Friendship Association. What are its main activities?

As I mentioned above, the society’s purpose is to promote Azerbaijan in Spain, to strengthen relations between Spanish and Azerbaijani people and to help our compatriots living in Valencia to get to know each other better.

A documentary film about Spanish pilots – Over the Sky of Azerbaijan (Sobre el cielo de Azerbaiyan or Azərbaycan səmasında) – was an initiative of our association. Let me tell you how this came about. Friendship between the peoples of Azerbaijan and Spain was established long ago. Studying the history of these relations in the archives, I found documents revealing close ties between the governments of Spain and Azerbaijan during the Spanish Civil War from 1936 to 1939. I contacted the president of the Azerbaijan Republic, Mr Ilham Aliyev, on behalf of the society with the idea of making a documentary about the Spanish pilots who were in Azerbaijan during the Civil War and, later, during the Great Patriotic War (World War II – ed.). The response was positive and the project started following an order from our respected president, Ilham Aliyev, who greatly values friendship between the people of Azerbaijan and Spain. 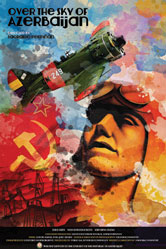 Poster for Over the Sky of Azerbaijan, designed by director Sagrario Perpinan

The film tells the story of Spanish pilots who trained at Military Aviation School No 20 in Kirovabad (now Ganja) following an agreement between Spain and Stalin’s government in Moscow. In January 1939, after the end of the Spanish Civil War, 180 young Republican pilots, most of them from Catalonia and Valencia, returned to Kirovabad and set up a pilot group. Thirty non-communist members of the group were told to leave the USSR. When the USSR joined World War II, they were sent to labour camps where they remained for 15 years.

After the fall of the Spanish Republic, all the pilots still in Kirovabad decided to serve in the Soviet air force. They defended the skies above Baku from Nazi attack, enabling the city to provide 70 per cent of the fuel for the Soviet war effort. At least 25 of the Spanish pilots lost their lives in the battles against Hitler’s forces.

Every year, our association holds events to celebrate the birthday of our National Leader Heydar Aliyev on 10 May, Republic Day on 28 May, International Women’s Day on 8 March and other important dates in the history of Azerbaijan. We made a film in Spanish about the life and work of National Leader Heydar Aliyev, dedicated to his anniversary, and screened it for a broad public.

Our association also holds charitable events for Spanish society. From time to time, we hold concerts in prisons and events in old people’s homes. As a result of the hard work of my daughter Fatima, our association translated into Spanish the musical comedy O olmasin bu olsun by our great composer Uzeyir bey Hajibeyov.

Other important events held by our association were forums on “Friendship between Azerbaijan and Spain” in Valencia in 2011 and 2012, aimed at expanding ties between our countries. The forums included a two-day academic conference on “The current situation and prospects for relations between Azerbaijan and Spain”, a series of events dedicated to the Day of Solidarity of Azerbaijanis Worldwide and eighth anniversary of the death of National Leader Heydar Aliyev, meetings with officials of the government of Valencia and with Azerbaijanis living in the city. 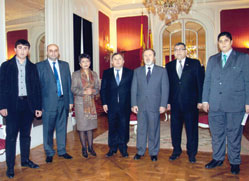 An Azerbaijani delegation consisting of Qafar Mammad oghlu Aliyev, section head on work with Azerbaijanis living abroad at the Department for Public and Political Issues of the Presidential Administration, Rauf Asif oghlu Aliyev, a member of the Azerbaijani parliament’s committee for social policy and vice-president of AFFA (Azerbaijan Football Federations Association), Bilal Shahshirin oghlu Aliyev, a senior soloist at the Azerbaijan State Song Theatre, and a range of other people participated in the forums.

The delegation held meetings with the heads of the Valencia regional government and parliament, officials from the Chamber of Trade, police, Valencia University Hospital, Cardinal Herrera University and football club.

I can mention as an example of the cultural events organised by our association a competition for women’s national costume, which was held for the first time in 2010 and included entries from around the world, from Azerbaijan to Ecuador, China to Senegal. The costumes from Algeria took first place at the event, which was attended by fashion designers, ambassadors and local officials. The competition was televised in Spain, Algeria and France. As the winner, Algeria is to host the next competition. I hope that Azerbaijan and its women’s costumes will take top spot one day.

Are your family as happy with life in Spain as you?

We’ve been living in Spain for quite a long time so, like me, my family – my husband, son and daughter – have got used to this environment and are happy here.