The opening of the first ASAN Service Centre just over a year ago marked a sea change in the provision of public services in Azerbaijan. The centre was established by the State Agency for Public Services and Social Innovations, subordinate to the Presidential Administration, as a pilot project serving two districts in Baku. The pilot was so successful that more centres have opened in Baku and beyond. And on 23 January Lala Masimova of Baku became the millionth citizen to use ASAN, proof of the high demand for the service.

ASAN aims to provide government services to the public conveniently and transparently and to make the most of modern technology to do so. It adopts what is a radically new approach in Azerbaijan – ensuring that citizens are satisfied with the work of civil servants and improving relations between civil servants and the public. Gone is the old bureaucratic attitude that led to members of the public having to visit a host of agencies in order to register a death, transfer ownership of property and so on. Now all this can be done under one roof.

The popularity of the ASAN Service is proof that it is on the right track, ASAN PR Director Anar Huseynov told Visions. There are already four ASAN centres in Baku, serving residents of all the capital’s districts, a centre in Sumqayit serving residents of the city and surrounding areas and another centre in Ganja, which serves residents of the west of the country. Mobile ASAN centres serve the parts of Azerbaijan that do not yet have their own physical centre. Anar Huseynov told us that about a thousand volunteers help ASAN staff provide services to the public. 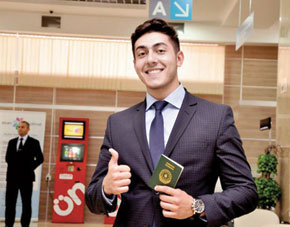 Our centre is like a doorway to a place where a citizen can call on all state bodies. It’s very convenient for the clients since ASAN offers some 25 kinds of services by nine state bodies and 22 kinds of additional bank, notary, insurance and other services. When we began our work, about 300 people per day came to our one centre. Now we have more than a thousand clients in each centre per day. That’s a sign of productivity!

Anar Huseynov said that ASAN regularly seeks feedback from clients. Touchscreens are installed in the centres, so that clients can rate the quality of ASAN’s services. Judging from the mostly positive feedback, people trust ASAN and the service can be proud of its work, Anar Huseynov said.

What services does ASAN provide?

The list of services provided at ASAN centres is a long one – it includes the renewal of driving licences, the issue and renewal of ID cards and passports by the Ministry of Internal Affairs; the issue of archive information by the National Archives; the registration of legal entities and individuals by the Ministry of Taxes; the issue of notes from the Land Registry; the registration of births, deaths, marriages and divorces and other changes in civil status; the determination of occupational pensions and much more.

ASAN also has an innovations department to encourage the generation of new ideas by staff and volunteers. The ideas concern how to improve the work of ASAN and other state bodies, especially in the provision of electronic services.

Members of the public who cannot get to an ASAN centre in the capital or other big cities can access the services via the mobile centres. The large, specially adapted buses, with ASAN Xidmet emblazoned on the sides, regularly visit different regions of the country. Villagers and residents of remote settlements can easily obtain ASAN’s services without travelling to the cities. Anar Huseynov again: We are planning to go to the 42 regions of Azerbaijan, but that’s not all. We are working to cover the whole country in the near future. 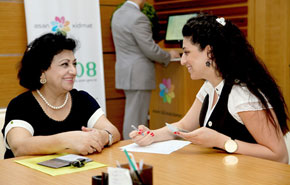 There is no conflict of interest between ASAN and the state bodies that provide services in its centres, Anar Huseynov says. ASAN itself does not take any services from these bodies. What we do is provide the right conditions for them to respond to people’s applications. Each state body has its own representative in the ASAN centres and our staff and volunteers just help them to successfully meet their obligations.

Before starting work here everyone goes through a tough selection process and receives training. Staff are preferably young and have to go on stress management, time management, ethical behaviour and other training courses. Quite frequently, the maxim in the commercial sector that the customer is always right applies here too, in the public sector.

Anar Huseynov acknowledged that the Azerbaijani public still has many negative stereotypes about state bodies. Extensive red tape, abuse of authority and refusals to consider applications have all contributed to this poor view of state agencies. What ASAN is doing is forming a different service system that focuses on meeting people’s needs.

We are trying to break the negative stereotypes of civil servants. This is not so easy, but it is possible. One elementary point – people are still surprised to see ASAN’s smiling and courteous staff and I know why. They have never encountered such treatment before from state agencies. Thanks to ASAN, they are starting to change their attitude towards the civil servants who represent state bodies here in our centres. 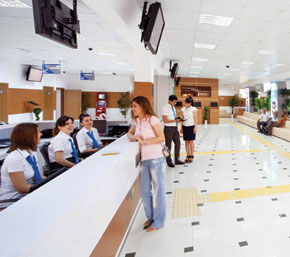 Inside Asan Service Centre No 1 at 36, Hasan Aliyev Street in Baku

Although many countries, including some former Soviet states, have something similar to the ASAN system, Azerbaijan’s version is a little different, Anar Huseynov says. The key thing is that ASAN provides various services by state bodies and non-state bodies alike. Georgia, for example, has “Legal Houses” which provide only legal services. In ASAN the list of services is very broad.

Many services are connected to banking, notary and legal services, so we are able to provide opportunities for applicants to complete all those operations inside one building without any need to go out. This is so convenient! No wonder people call us the ASAN service! It is possible that in the future our services will further expand.

The Azerbaijani word asan translates into English as easy or simple, an apt name for the service.

Another feature distinguishing ASAN from other government bodies is language. Knowledge of English is one of the requirements for ASAN staff, which means they can serve the many expatriates living in Azerbaijan. So there is no language problem for foreign clients.

At least Russian, English and Turkish-speaking people can apply easily and feel at home. Indeed, many of our visitors from Turkey are very keen to see a similar system to ASAN in their own country.

As the number of people using ASAN’s services is increasing by the day, maybe public perceptions are changing and people really are beginning to have faith in the transparency of state services.