Conference – Religions in the Caucasus 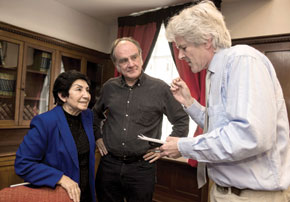 Mark Elliott asks a question of Profs. Farida Mammadova and Jost Gippert
Its intriguingly relaxed mix of ethnicities and faiths has drawn many academics and clerics to Azerbaijan in recent years, the search for harmony between cultures having become ever more urgent in a world where fragmentation can appear to be the driving force.

In early March, however, the flow was reversed and a team of historians flew out of Baku, heading for London and a two-day conference – Religions in the Caucasus – organised by The European Azerbaijan Society (TEAS).

Some 50 learned minds assembled at the Hallam Conference Centre to present and debate the history of the region from the perspective of the different religions that have been practised there over the ages.

TEAS Director Lionel Zetter welcomed participants, pointing out that a crossing of cultures was inevitable in Azerbaijan, given its location. He added: I have never encountered a country like Azerbaijan, where the world’s great faiths – Judaism, Christianity and Islam – sit so comfortably together.

In the opening address the Very Reverend Dr David Ison, dean of St Paul’s Cathedral, remarked on the loss of identity resulting from the trend towards globalisation. This often leads to feelings of insecurity, fear and hostility towards other groups. While there are places like Azerbaijan where people live in peace and harmony, generally there is a need to overcome fear and achieve security of identity, so that others are seen as an opportunity for greater diversity. To work for the common good is to be self-critical and to work with people with whom we disagree; to ask not ‘what is good for me?’ but ‘what is good for us?’ 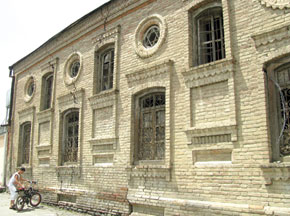 The first panel session discussed the early religions in the Caucasus region, focusing on Zoroastrianism and Judaism and the diversity of religious practices. Dr Qoshqar Qoshqarli referred to archaeological evidence of significant differences in funeral and burial rites. He cited the many geographical barriers in the region as a reason for the separate development of emerging societies and distinctions in their religious traditions. There were still, however, many examples of borrowings or exchanges of custom, indications that there was no inter-religious strife.

Farda Asadov, vice-rector of Khazar University, ventured back into the late 1st millennium to discuss the facts and legends concerning the conversion of some of the Turkic Khazar people to Judaism. With plenty of written but little archaeological evidence for this, with tales of sacred books hidden in caves, the presentation was certainly intriguing. And following a wide-ranging outline of the history of Judaism in the Caucasus by Moisey Bekker, there was a refreshingly open discussion of differing interpretations of events in that 1st millennium.

Christianity in the Caucasus

The history of Christianity in the Caucasus is no less fascinating, especially that of the 1st millennium state referred to now as Caucasian Albania. Prof. Farida Mammadova described the development of the Albanian Church from the visits of apostles from Syria in the 1st century to the tsarist submerging of the church into the Armenian Apostolic Church in 1836.

Dr Jost Gippert of the University of Frankfurt gave a tantalising description of work on the few samples found so far of Albanian inscriptions and the Albanian palimpsest from St Catherine’s Monastery in Sinai. Dr Bernard Outtier, honorary member of Georgia’s National Academy of Sciences, revealed that there are 242 pages of Albanian script detailing the Gospel of St John. He enlarged on the importance of the palimpsests in establishing Christian use of the Albanian language. Again interesting questions were raised, this time about the apparently mainly oral tradition of Albanian and its relationship to present-day Udi, as spoken in the Qabala region village of Nij. 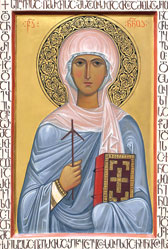 Caucasian Albanian beliefs were examined by Dr Ulviyya Hajiyeva and Dr Mahabbat Pashayeva, both of the Azerbaijan National Academy of Sciences, the former describing the centrality of the Virgin Mary, and the latter remarking on the persistence of natural phenomena as objects of worship. Robert Mobili, chairman of the Albanian-Udi Christian community, outlined elements of the history and current status of the Udis as descendants of the Albanians.

Dr Liana Melikishvili, Georgian Academy of Sciences, and Françoise Thelamon, emeritus professor of the University of Rouen, expanded discussion on Christianity in the Caucasus from their work on the evangelisation of Iberia (Georgia). Interesting accounts, legends and tantalising speculation about the 4th century ‘captive’ St Nino were central to these sessions on the spread of Christianity.

Academician Vasim Mammadaliyev emphasised the relatively peaceful historical progress of successive and diverse religions through the Caucasus, touching on early paganism, Zoroastrianism, Judaism, Christianity and Islam. He offered the continued existence of these religions in the region as further proof that all religions have been regarded with reverence.

Dr Leyla Melikova of the Institute of Oriental Studies continued this theme with a closer focus on Islam in Azerbaijan, during which she identified many of the historical struggles as being of a political rather than religious nature. 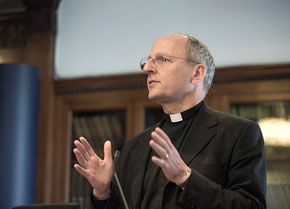 Confessions in the 19th and 20th centuries

Dr Melikova’s proposal found echoes in the discussion led by Dr Martin Rzepka, Pontifical University of John Paul II, Krakow. Considering the effect of 19th century western missionaries on religions in the Caucasus, he suggested that the Protestant emphasis on translating the Bible had a political impact in raising questions of identity. Conversions from Islam to Christianity also had a significant political dimension, as did Russia’s relations with Armenians, especially after 1828 (the Treaty of Turkmenchay).

The 19th and early 20th centuries were no strangers to population, religious and territorial change in the Caucasus. Prof. Karim Shukurov, head of the TEAS Academic Centre for Azerbaijani Studies, used Russian Empire statistics to give a well-illustrated talk clarifying the extent of those changes. Following the Turkmenchay Treaty, Russia was keen to survey its newly acquired lands in the south and south-west Caucasus. These surveys, along with later censuses, military drafts etc. provided a very useful picture of the effects on religion of political change over the period.

The final session opened with a stirring appeal from Prof. Jadwiga Pstrusinska, University of Warsaw, for the skills of geneticists to be employed in historical and demographic research. She proposed that studies of DNA in combination with evidence of cultural and religious influences from artefacts could provide a limitless flow of historical information about people’s origins, movement and mixing. In turn, this could contribute to an understanding of religious behaviour.

Dr Natia Jalabadze, Tbilisi State University, added to the theme of regional religious tolerance. She alluded to the frequent commerce Georgians had engaged in with people of various religions that led to an acceptance of everyone living according to their own beliefs. The expansion of religious behaviour in the post-Soviet era had led to distance arising between some communities, but there was also evidence of people sharing religious ceremonies.

Extending the scope of the conference to cover religion and cults in Arsacid Armenia, Prof. Marek Jan Olbrycht, University of Rzeszow, pointed to the effects on the region of the struggle between the Parthian and Roman empires. The Parthian Arsacids had a strong influence on religious customs in Armenia and Albania, cults in the latter sharing elements with Zoroastrianism. There is still, however, very little written evidence and Prof. Olbrycht impressed the need for more archaeological evidence from the period. 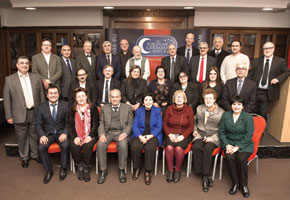 As more than one speaker pointed out, the diversity of ethnicity and belief within the Caucasus is one consideration in seeking to understand the respect that exists between people of different religions. Thus, as well as the academic content shared, the conference might also have adopted the slogan ‘Only connect’. Speaking afterwards, Dr Jost Gippert anticipated further work on the languages spoken in Azerbaijan, while also welcoming the opportunity to broaden his local network:

This was a very good occasion to bring up new contacts – that was very important for me here. I’m very glad to have been here. I’ve learned a lot and I’ve made so many new contacts and I’m very happy with that.