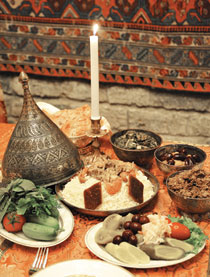 Imagine the scene: a huge banqueting hall, decked out in flowers and balloons; people are having fun – some are dancing, others listening to music, or enjoying some of the abundant food, or chatting to one another. Suddenly the lights are turned off and the hall falls silent. Then to the strains of Azerbaijani music a girl in national costume emerges from the dark; she is dancing a traditional folk dance, holding a plate in her hands. It’s the plate of pilaf, illuminated by a candle, which is always brought to a wedding feast here in Azerbaijan.

The dance usually lasts a couple of minutes, then the lights are turned back on and the music starts again. Served on special occasions, pilaf is the final savoury dish at wedding feasts, brought in with great ceremony. Besides that, no family event or special occasion is complete without pilaf, which is considered the signature dish of Azerbaijani cuisine. Known here as ash, or to Russian-speakers plov, rice pilaf is thought to have come to Azerbaijan from further east – Iran and India. The country has some 200 different pilaf recipes, savoury and sweet – pilaf with chicken, with lamb or beef, with beans, with fish, with eggs, with dried fruit, cooked in milk and many more. Each region of the country has its own versions of pilaf too – so there is Baku pilaf, Lenkeran pilaf, Karabakh pilaf and so on.

Salima Aliyeva, a chef at the Shirvanshah Restaurant in Baku, takes us through preparation of her favourite Azerbaijani pilaf – majlis ashi, which translates loosely as Special Occasion Pilaf. Don’t be daunted at the thought of cooking Azerbaijani pilaf, as it’s not as difficult as it might seem. Salima and our recipe below talk you through each stage of the process. Try it and we are sure that this pilaf will become a family favourite.

Cooking pilaf is usually divided into two parts: preparing the rice and making the ash-qara (sauce). The rice is parboiled and then steamed to produce a dish where all the individual grains of rice are separate, most certainly not in sticky lumps. Qazmaq, a crust made at the bottom of the pan when rice is steamed, is a tasty part of pilaf.

Salima is starting: First leave the basmati rice to soak in salted water to remove excess starch, then drain. Put a few threads of saffron in a cup and add boiling water. Cover and leave to infuse for at least an hour. 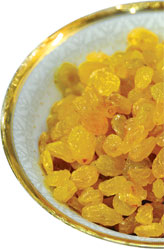 Fill a heavy-bottomed saucepan two-thirds full of water and add salt. Bring the water to the boil, then add the drained rice. Turn the heat down slightly but cook at a rolling boil for 5 to 10 minutes. Remember that you are only parboiling the rice, not cooking it completely.

That’s the first part done. Next for the qazmaq. Salima makes her qazmaq from dough of eggs, flour and yogurt. Another way to make the dough is to mix some of the parboiled rice and yogurt. Salima rolls out the dough and cuts it into diamond shapes (like the Azerbaijani sweet pastry pakhlava). She washes the rice pan and puts it back on the heat with a large knob of butter. She places the dough diamonds onto the sizzling butter, then adds the half-cooked rice.

Spoon it gently into the pan to avoid breaking the grains. When half the rice is in the pan, pour over half the saffron infusion. Put the rest of the rice in the pan and pour most of the remaining saffron infusion over it. Put several knobs of butter on top. Salima takes the pan lid, covers it underneath with a clean tea towel and fits it firmly onto the rice pan. The towel helps to absorb the steam. She leaves the rice to steam for 40 minutes but says that it can be left for longer without coming to any harm.

Now for the next part – making the ash-qara. Salima cuts the lamb into chunks and boils it in water until it is soft. She removes the meat from the pan and sets the bouillon aside. Then she melts some butter in a frying pan and browns the meat. In a separate pan she fries sliced onion in butter until it is transparent (but not brown). She adds the meat to the onion pan, along with boiled chestnuts, soaked plums and salt & pepper. She stirs the mixture well. Then she dissolves a teaspoon of turmeric in a glass of hot water, pours the mixture and the saffron infusion into the pan and stirs everything again. Then she leaves it to simmer for 20 to 30 minutes, but keeps checking on the pan to make sure that nothing is burning. 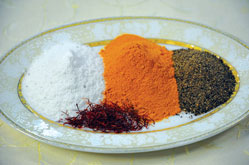 Salt, turmeric, pepper and saffron, which give Special Occasion Pilaf its distinctive flavour

So, the pilaf is ready to eat. It’s time to turn the lights off and loudly declare – Ash gelir! The pilaf is coming!

Ingredients for the rice

1. Place a few threads of saffron in a cup. Pour on boiling water, cover and leave to infuse for at least an hour before using.

2. Put the basmati rice to soak in salted water to remove excess starch, then drain.

3. Fill a large heavy-bottomed saucepan (which has a well-fitting lid) two-thirds full of water and add salt. Bring the water to the boil. Add the drained rice. Turn the heat down slightly but cook at a rolling boil for 5 to 10 minutes. Remember that you are only parboiling the rice, not cooking it completely. To test whether or not the rice is ready, take a couple of grains out of the pot. Put them on your wet finger and push your nail through the grain, which should be soft on the outside but with a hard white centre. When the rice is soft on the outside, remove from the heat and strain.

4. Mix together the eggs, flour, butter, yogurt and a pinch of salt into a smooth dough for the qazmaq.

5. Roll out the dough on a floured surface until it is roughly 1-1.5 cm thick. Cut into diamond shaped pieces.

6. Wash and dry the rice pan. Put it back on the heat and melt a large knob of butter. Place the diamond-shaped pieces of dough onto the sizzling butter.

7. Spoon in half of the parboiled rice, taking care not to break the grains. Pour over some of the saffron infusion. Add the rest of the rice to the pan and pour over the remaining saffron. Add several knobs of butter. Place the pan lid onto a clean tea towel and tie the corners of the towel onto the handle of the lid so that the lid is covered underneath. Place the towel-covered lid onto the pan, making sure it fits properly. The tea towel helps to absorb the steam. When the rice is steaming, turn down the heat and leave to steam for 30 to 45 minutes. It can be left to steam for longer without coming to any harm. 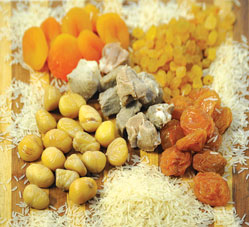 8. Serve the rice on a platter with the qazmaq diamonds arranged on top.

1. Place a few threads of saffron in a cup. Pour on boiling water, cover and leave to infuse for at least an hour before using.

2. Cut the lamb into chunks. Place in a pan with water and bring to the boil. Skim off any scum that forms on the surface. Simmer until the meat is soft. Remove the meat from the bouillon, but don’t throw the bouillon away.

3. Pierce the chestnuts. Place in a pan, cover with water and bring to the boil. Simmer for 5 minutes. Remove from the water and shell. Don't take all the chestnuts out of the water at once, as they are difficult to shell when dry.

4. Soak the dried fruit in boiling water for 3-4 minutes, then drain.

5. Melt the butter in a frying pan and brown the softened meat.

6. Slice the onion into rings. Melt some more butter in a separate pan and fry the onions until transparent.

7. Add the meat, chestnuts and dried fruit to the onions and stir well. Fry for 3-4 minutes. Add salt & pepper.

8. Put a teaspoon of turmeric into a glass. Add some of the bouillon (the water in which the meat was cooked) and stir until the turmeric is dissolved.

9. Pour the saffron infusion and the bouillon and turmeric mixture onto the meat and chestnuts. Simmer for 30 minutes or so, stirring frequently to make sure that nothing sticks. Don’t cook for too long or the fruit and chestnuts will lose their shape.

10. Spoon the ash-qara on top of the platter of rice, or serve in a separate bowl. Nush olsun! Enjoy your meal!

Our thanks to Salima and the Shirvanshan Restaurant for their help.