Loquats, Lemons, Mandarins And kumquats too – super fruits from Lenkeran 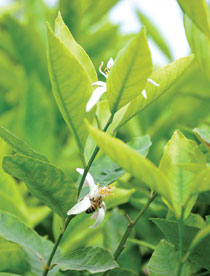 At 73 years of age Gulagha Tariverdiyev feels more like 50. He is kept young by daily chores in his citrus orchard, where about a hundred fruit trees need his fatherly care. Gulagha baba, as his neighbours call him, thinks of the trees as his own children. He starts each morning with a walk to the orchard just to greet every lemon, mandarin and kumquat tree.

We met Gulagha baba when we were in Lenkeran (Lenkoran), a southern region of Azerbaijan, to find out about tea-cultivation. As it turned out, Lenkeran is rich not only in tea, but in citrus fruit as well. So we decided to delve further into the world of citrus-growing. Though largely typical of orchards in Lenkeran region, Gulagha’s garden has a distinguishing feature. You can always find fruit in his orchard, whatever the season.

You know, it’s not as easy as it might seem. You need to work hard to have a good harvest. I prune the trees regularly and cover them all with oil-cloths in winter to protect them from the frost and do many other things. I’m never without work. 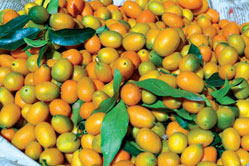 Twice a year Gulagha baba harvests fruit from his orchard. His only son helps him to pick the fruit from the top of the trees, but all the other fruit he picks himself.

Fruit-picking takes special skill. Not everyone can do it. Citrus fruit, especially lemons, are very capricious; they should be picked carefully because of all the thorns on the branches.

It was spring when we visited Gulagha baba’s orchard, so everything was in bloom. The mandarin trees were stunning, covered in blossom, which gave off a gorgeous aroma. To Gulagha baba they were beautiful maidens preparing for marriage. 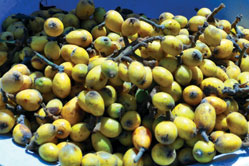 You see how many brides I have? Each one of them is precious to me. Do smell them! You see how sweet they smell?

They really do have a very fine, sweet scent. Besides their beauty, mandarin trees bring real benefits to their owners. Mandarins are always in demand, so they are the basis of Gulagha baba’s livelihood. Then come the lemons and kumquats.

Sweet yet tangy, kumquats can be considered a delicacy. Gulagha baba gives the kumquat trees special treatment; to him they are like little princes because they are still unusual for Azerbaijan. Kumquats were brought to the country just 15 to 20 years ago, but in fact they don’t require as much care as lemon trees. 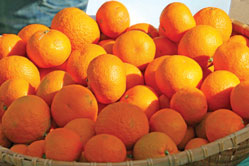 First of all, they don’t have thorns and grow to be only two metres tall, so it’s not so difficult to pick kumquats. Usually, I pick them without any help from my son. I can easily manage by myself. Second, they can be fertilised once a year while lemon and mandarin trees need fertilising twice.

And indeed, kumquats are very healthy fruit. They are distinctive in that the fruit is eaten whole, peel and all. The tree is a small evergreen, native to the mountains of south-eastern China, and is grown both for its delicious fruit and as an ornamental shrub in many parts of the world. The name kumquat or kam kwat means ‘little orange’ in Cantonese. A mature kumquat tree bears several hundred olive-sized, brilliant orange fruit including in winter. Moreover, Gulagha baba harvests kumquats at least three times a year. 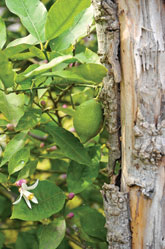 A lemon tree in bloom

Kumquats are incredibly rich sources of dietary fibre, minerals and pigment anti-oxidants that contribute towards good health. Furthermore, fresh kumquats contain high levels of anti-oxidant vitamins such as A, C and E. Altogether the phyto-chemical compounds in kumquats are thought to help protect us from cancers, diabetes, degenerative diseases and infections. See how healthy the kumquat is!

A small piece of Japan in Lenkeran

Another fruit from Lenkeran that we have to mention is the mushmula (Eriobotrya japonica), known in English as the loquat or Japanese medlar. As you can guess from the name, the loquat has a far eastern origin too. Loquat, like kumquat, is derived from Chinese and means ‘rush orange’. Centuries ago the fruit was taken from China to Japan, hence the name Japanese medlar. Though the loquat shouldn’t be confused with the medlar (mespilus germanica), which is widespread in Azerbaijan too. 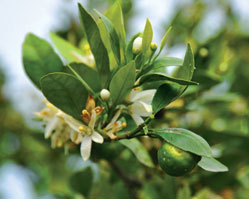 In Lenkeran local people call the loquat mushmula without knowing its origins. The trees can be seen all over the region; they are such unpretentious plants. In late spring the attractive loquat blossom clothes the streets in yellow. The fruit is fleshy, a mixture of sweet and a little sour.

It’s interesting that in Europe the loquat used to be an ornamental tree, whereas now it is cultivated for its fruit, especially in sunny countries like Israel and Italy. Here in Azerbaijan, warm Lenkeran is thought to have just the right climate for loquats. The fruit do not store or travel well, making them unsuitable for export. So, when you are in Azerbaijan, don’t miss the chance to visit Lenkeran to taste its citrus fruit and mushmula.