Santé – to the Future of Azerbaijan’s Vineyards 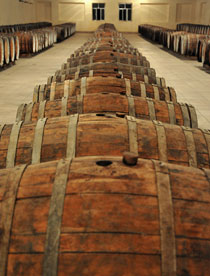 A legend tells of grapes growing in a forest that were pecked at by birds. A poor man uprooted the forest vine and planted it near his home. It grew well and produced delicious, juicy grapes. He loved those berries and planted ten vines the second year and 100 the next.

…One autumn, the poor man made grape juice from an ample harvest. He drank some of it and stored the rest in jugs. Two months later he opened one of the jugs and tried the contents. He liked it very much and was surprised at how the twisted vine had produced such a delicious drink. He invited his friends round for a feast. A nightingale flew in first, tried the drink and said: Whoever tries this drink will sing like me!

Then a cockerel flapped in, drank and said: Whoever drinks more will be as truculent as me!

Third was a fat boar, which ran in, drained a bowl and said: Whoever drinks too much will wallow in mud like me!

Finally a fox arrived and drained another bowl, saying: The wine will steal the mind of whoever gets completely drunk and, like me, he will be red-faced for a long time afterwards.

This is how wine affects people. A little wine makes them sing and have fun; a little more addles the brain; some more and they can’t stay upright; too much leads to actions they long regret. 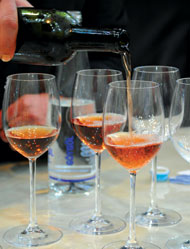 This year wine flowed like water in Ganja, but fortunately nobody wallowed in mud. For the second year the Ganja Wine Festival brought a truly festive spirit to the city and its people. It all began with a visit by an Azerbaijani delegation to the French region of Burgundy to view its wine-producing technology. The special status afforded to wine there impressed the delegation. So arose the idea of a wine festival – why not celebrate wine here in Azerbaijan where viticulture has very deep roots? That is how it came about. Now a French delegation had come to Ganja to view the development of Azerbaijani vineyards and to take part in the wine festival.

So, where is Ganja? To start with, we should say that Ganja is the second largest city of Azerbaijan in terms of administration and economy, and its population of 500,000 thrives in the country’s west. The name Ganja is believed to come from the Persian, meaning treasure. And it really is a treasure house of Azerbaijani history, culture and traditions. A historic city founded in the 850s, it was the first capital of the Azerbaijan Democratic Republic established in the early 20th century. It is the home of famous poets and philosophers such as Nizami Ganjavi, one of the most prominent poets and philosophers of the Eastern Renaissance. And indeed, visitors enjoy a very beautiful and colourful city. Sattar Bahlulzade, the founder of modern landscape painting in Azerbaijani art, produced a vivid representation of Ganja’s mountains in his famous Tears of Kapaz. 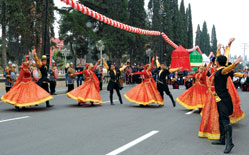 Dancers welcome visitors to the festival

Ganja is also a treasury of tasty fruit and is especially known as the home of the persimmon. Grapes grow here too, though the best grape-producing regions are neighbouring Shamkir, Goygol and Tovuz. German settlers who arrived in the 19th century planted many of the vineyards that flourish in these districts today. They then opened wineries in nearby Ganja to process the grapes. Today one of the city’s best-established wineries is Ganja Sharab 2, which festival guests visited to taste local wines.

The day before the festival opened Ganja hosted a conference organised jointly with the International Organisation of Vine and Wine. A large delegation from France comprised mainly of wine producers also attended. Some of the producers shared their experience and thoughts on how to improve wine production throughout the world. The idea of wine as a stimulus for tourism was noted by Ganja mayor Elmar Veliyev, who welcomed festival guests to a city that has, by the way, been designated Youth Capital of Europe for 2016.

I’m sure this festival will play a significant role in the expansion of cooperation between the business circles of both countries – Azerbaijan and France. It will increase our country’s tourism potential and impact positively on wine development. We have very good quality wines and can take them to international markets. We only need to improve our marketing systems to promote local wines. 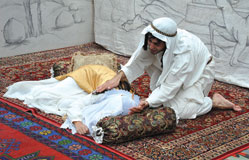 André Villiers, president of the General Council of the Yonne department in the Burgundy region of France, noted that relations between the two countries are developing and expanding in the economic sector, particularly in agriculture. He also expressed the hope that economic ties will continue to develop further. Federico Castellucci, director general of the International Organisation of Vine and Wine (IOM), appreciated the quality of Azerbaijani wine very much and hoped to see more local products in international markets.

Azerbaijan became a member of the IOM in June this year. The country has focused since then on the development of vines and wineries as important contributors to the economy and agriculture. Local experts noted that the government has devoted considerable effort to creating the Caspian Coast wine trademark and has invested heavily in advertising the brand outside Azerbaijan. The ministries of agriculture and economy and industry are working to develop a wine culture programme and to reduce the production of spirits in the country over 2012 to 2020. Experts advise that the programme should expand the country’s wine-producing areas, organise new wineries in rural areas and initiate the export of Azerbaijani wine to European markets. The ministries are supporting local winemakers by offering them long-term loans to modernise their manufacturing facilities and increase their production capacities. Azerbaijani wine producers are also active in international wine exhibitions. For example, Azerbaijani wine products featured in the Auxerre wine exhibition in France in May 2012. 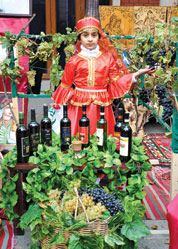 Nowadays, Azerbaijani wine production is in the hands of local producers such as the Ganja Sharab Winery, the Vinagro Goygol Sharab Factory, the Naig Company’s Tovuz Baltiya, Agro-Azerinvest MMC and others. Sales by these companies were stable in 2012 and 2013, and are expected to increase next year. Throughout the Ganja festival there were pavilions presenting wines from Azerbaijan and other countries, as well as from French regions including Burgundy, Alsace, Bordeaux and Champagne-Ardenne. So there was a rich display of the world’s wines at which guests could appreciate the quality and taste of different brands. Marc Ivasilevitch, a Frenchman from company Russian Day, was delighted by Azerbaijani wines, especially admiring the Fireland brand’s Yalli. Oh! Very nice! Such an interesting taste! Marc, a skilled wine taster, distinguished Yalli from the other wines. Also on display were the brands Ganja Sharablari, Product of Azerbaijan, AzNar, Tovuz, Qabala Sharab Zavodu and Khan.

In fact, many guests relished the local wines. Ganja mayor Elmar Veliyev’s efforts to promote local production during the wine tasting created huge interest. Even French producers acknowledged the taste of Azerbaijani wines and hoped for mutual contributions. Of course, Azerbaijan cannot yet be compared with leading wine-producing countries such as France, Chile, Italy or Spain, but experts predict that wine consumption here will increase. Thus, more wineries are expected to open, while established ones will modernise their production facilities and expand manufacturing capacity. Modern distribution and retail channels need to be developed, along with specialised wine shops that will have a positive impact on the wine culture programme. Toasts of Santé! could be heard all around as visitors raised a glass to friendship and good health. 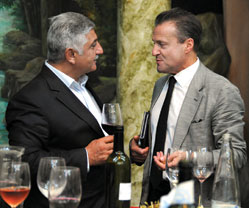 Perhaps the most memorable moments during the festival were provided by children’s performances. Dressed in national costumes a hundred children staged a variety of acts including singing, dancing, drawing and theatre. An excerpt from Nizami Ganjavi’s poem Leyli and Majnun acted out by young players especially caught the eye.

Thank you very much for inviting us to this beautiful festival! We liked everything here, but most memorable was the children’ performance; they carried on despite the cold weather. Thank you, children!

Almost every guest expressed their thanks to the festival organisers and indeed to the children. The festivities continued with a taste of local cuisine and a cultural programme until late in the evening.