Azerbaijani Imagery and Compassion in Harmony

A View of Togrul Narimanbayov´s work from Inside and Out 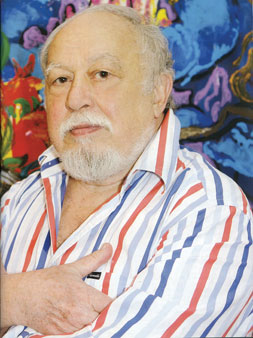 One of Azerbaijan´s best known artists is Togrul Narimanbayov. He uses themes from Azerbaijani folklore and traditional imagery in much of his work and is known equally for his portraits, large canvases and murals. Mohbaddin Samad, author of two books about the artist, tells Visions about Togrul Narimanbayov´s work

Baku´s Inner, or Old, City may appear a disorderly jumble of streets at first sight, but is in fact a rare example of perfect oriental architecture. This ancient walled city, dubbed a ´unique open-air museum´, holds secrets and mysteries. Togrul Narimanbayov sees everything in the context of national identity and compassion. He remains prominent during this time of contradictions, looking at the world from the walls of the Inner City and from Luxembourg, Paris, Washington and elsewhere. As a result, his work travels around the world. Each piece contains its own mystery.

Togrul Narimanbayov has a rich life story and has travelled contrasting paths. The painter spent part of his childhood and youth in Uzbekistan and Lithuania. The epic flow of miniature art in Azerbaijan and Uzbekistan made a deep impression on his childhood memory.

He experienced another world in Lithuania. There he encountered the splendour of the Western baroque style and the severity of Gothic architecture. While studying at the Institute of Painting in Vilnius, Togrul Narimanbayov admired the romantic beauty of Delacroix, the sincerity of Giotto, the tragic breadth of 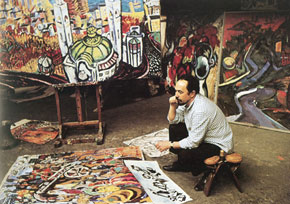 Togrul Narimanbayov in his studio
Rembrandt and the accuracy of C_zanne´s artistic philosophy. But he regarded Van Gogh as the artist who was spiritually close to him.

Synthesis of East and West


Togrul Narimanbayov arrived on the art scene in the 1950s with the piece of work he produced for his degree, Baltic Fishermen. Art was flourishing at that time with new trends and tendencies emerging. Some painters sought to work in the realist style, while others chose strict, poetic or other trends. In Togrul´s work, a synthesis of oriental and Western art is especially dominant. In his painting the decorative beauty typical of oriental miniatures is in harmony with the intellectuality characteristic of Western art and becomes the driving force of these works.
We would have expected Togrul´s work to be universally admired and appreciated, but the opposite was the case. Many critics considered his work to be influenced by abstract art. Some even said Togrul was a painter who had ´lost his national identity´ and had ´been knocked off his stride´. But Togrul ignored all this and continued to work as he wished.

Opinion about his work has always been divided. As someone who looks extremely aristocratic and elitist, he is often perceived in Azerbaijan as 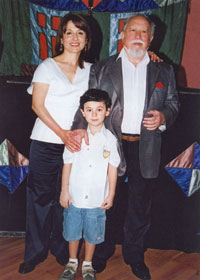 Togrul Narimanbayov with his family
an artist who ´has not come from the grass roots and is unaware of their problems and traditions´. But in fact, this is not true. Togrul is an artist who has been among the people since his childhood, sees their problems and traditions from the inside and is able to convey them in a synthesis of nationalism and humanism. These qualities are extremely strong in all his works, especially in Festivity in Buzovna, Mugham, Musicians, Market in Shaki, In the Pastures and Panorama of Ancient Nakhchivan. Since these paintings convey national traditions and antiquity, modernism and humanity in close unity, they always look colourful and fresh.

According to art experts, the many layers in Togrul´s work begin with ancient miniatures, fairy tales and myths that start with ´once upon a time´ and end with ´apples fell from the sky´. For this reason, all these works resemble myths and legends which have a happy ending and clearly reflect the national features, customs, lifestyle and psychology of the Azerbaijani people. As with fairy tales, in many of Togrul´s paintings, especially in the monumental wall painting In the World of Tales, you encounter a world of wisdom where truth mixes with legend, thought with dreams, joy with grief, humour with pain and where light triumphs over darkness, justice over injustice and life over death. 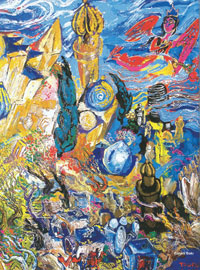 Windy Baku by Togrul Narimanbayov, oil on canvas
Puppet Theatre in Baku. It was his first step in wall painting and first successful mural. This work clearly shows that Togrul came to murals after years of thought and after realizing his potential to convey his ideas to the viewer. As he said, he was ´forced´ to address the walls of urban buildings after realizing that canvas was no longer enough for his fantasy. This ´forced´ move ended in success and revealed a new layer in the painter´s work.

Togrul Narimanbayov turned to murals again later in his career and created unique pieces of work. The murals My Land of Flowers, Azerbaijan is a Land of Beauty and Flowers and The Ashug´s Song which decorate the foyers of the Azerbaijani parliament, the Hotel Azerbaijan and the former Hotel Moscow (The Ashug´s Song mural at the Hotel Moscow was taken out before the hotel was knocked down) are especially valuable. Like the painter´s monumental wall painting in the Puppet Theatre foyer, these murals also have a polyphonic structure. Simplicity and sincerity, knowledge and wisdom, folk characters and modernism are united and supplement each other in these murals as they do in other works by Togrul. Although humanism and simplicity and modernism are mixed together, the works do not feel eclectic at all. Instead, everything seems to be organically united in these murals as if an invisible genetic line holds the composition together.

Like other types of painting, mural painting has its own specific features and difficulties. For example, a painter is able to convey his thoughts just as he wants to on canvas. He even has scope to display his virtuosity. However, this is impossible on a wall. Though Togrul´s murals and 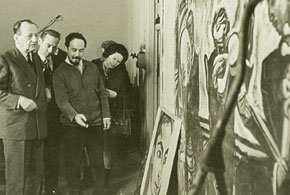 André Malraux in the painter´s studio, 1969
canvases are similar, he says that in mural painting the responsibility is greater. ´In works painted on canvas, you can change and correct whatever you don´t like. If you don´t like something at all, you can hide it and even set it on fire. However, if a painting is on a wall, you cannot change it. You cannot correct or destroy it. It will remain as it is - with all its faults and mistakes.´

For this reason, Togrul pays special attention to murals. He does not experiment or use any fireworks here. He starts working only after he has decided in full on the composition, idea and style of the mural. ´They need a beautiful song composed and prepared in advance so that it can be put on the wall directly,´ the artist says of murals.

Togrul spends months mulling over a mural deep in his heart, hones it mentally and commits it to the wall only when it is completely ready. For this reason, his monumental murals resemble ancient songs based on the joys and sorrows of the people. The murals, rich in emotion, philosophy and subject matter, are immediately attractive. They are bright and positive and foster feelings of endless love for our distant past and current life. These qualities 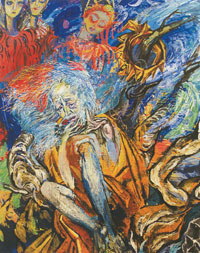 
Togrul Narimanbayov does not favour any one style in his work. He has the talent to create valuable work in a variety of styles.

His panoramic, historical and ethnographic work and his work on domestic subjects portray the lifestyle, history and ethnography of the people. They clearly show the painter´s boundless love for his land and people. For him, Azerbaijan is not just Baku, but also its remote areas and beautiful forests, rivers and plains. The painter uses the miraculous language of colour to persuade the viewer that his homeland is the most beautiful place in the world!

Since Togrul looks at the world through the prism of fairy tales and legends, exaggeration, irony, brightness of colour and cleanness are especially dominant in his work. Pomegranates, other fruit and even people´s eyes are very big in his paintings. Contrary to this, he has ironic, sterilized and deformed pictures of very small, naive people. The result is that there is no single interpretation of Togrul Narimanbayov´s work and critics still disagree about him. Some people see his style as ´buffoonery´ and ´arrogance towards the people´, while others see this as the painter´s attempt to ´attain the crystal clarity of the people´s perception and naturalness´.

I agree with the latter view. Togrul Narimanbayov merges traditions and modernism, nationalism and humanism, oriental tenderness and Western intellectualism in his work and this is his ´specific style´ and beauty.

Togrul Narimanbayov is an artist of great 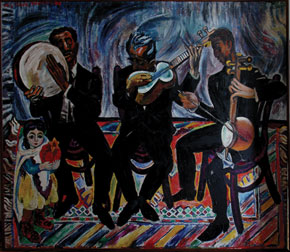 Mugham by Togrul Narimanbayov, oil on canvas
talent. At different times, he has enjoyed success in painting, graphic art, murals and set design for ballet. He has repeatedly held exhibitions in Azerbaijan, across the former Soviet Union and in other countries. His works have been displayed at the world´s best known galleries.

As time passed and pressure and deprivations began to disappear, the painter started to display new creative skills. He has published his first poems in the press and since the turn of the century has performed interesting concert programmes on major stages. Those who loved him as a painter now love and value him as a singer.


At the end of the 1980s, Togrul Narimanbayov experienced unexpected upheavals in his personal life. Though he hid this from his loved ones, he could not hide it from parapsychologist Tofiq Dadashov whose portrait he had painted: ´You are famous,´ Dadashov said. ´You will become even more famous. But you will face great difficulties. You will travel the whole world far away from your homeland.´

And this happened. A long time after this conversation, Togrul Narimanbayov and his family moved to Moscow, then to America and from America to Luxembourg and France. Though he faced great difficulties, he managed to settle down in Paris. He even opened a tremendous personal exhibition in one of Paris´ authoritative exhibitions halls - the Couvent des Cordeliers. All the beauty of Azerbaijan seemed to have moved into 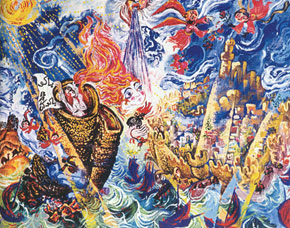 Togrul Narimanbayov has always been productive, regardless of where he lives. He never leaves behind his identity and roots. The spirit of Azerbaijan can still be felt in the work painted in the USA, Luxembourg and Paris. Togrul´s Goychay pomegranates, sweet Absheron figs and astonishingly fragrant Shuvalan flowers quietly and persistently attract people. A professor at Princeton University in the USA, Bernd Siezinger, bought 40 of the painter´s works and set up his museum in Princeton.

Togrul Narimanbayov has won world recognition as an artist and his work attracts great interest. He has been included alongside other painters of genius in a world arts encyclopaedia. He has been awarded the title of People´s Artist and has won state prizes. Admirers of his work include famous artists, musicians, writers and scientists - André Malraux, Chingiz Aytmatov, Lotfi Zadeh, Mstislav Rostropovich, Qara Qarayev, Ueno Makoto, Irene Ludwig, Sattar Bahlulzada and Fikrat Amirov. Writer Chingiz Aytmatov described him as “the greatest painter of our time” and ´an artist who has elevated painting´, while pianist Ueno Makoto called him “a painter whose works resemble a big musical note” and “a talented artist who generously showed the beauties of his land to the world”.

Artist Togrul Narimanbayov who first saw the world from Baku´s Inner City is now in the heart of Europe, in Paris. He sees the world both from the East and the West, sees its contrasts, problems and beauty. But beauty dominates in his work, which is permeated with the memories and traditions of Azerbaijan.