A Window on the World – Azerbaijan University of Languages 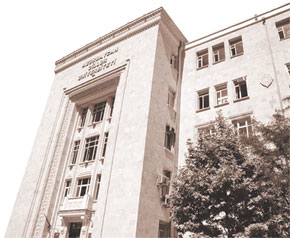 Azerbaijan University of Languages (AUL) is one of the country’s leading institutions in the education of linguists and international relations experts. AUL offers advanced education and research programmes with bachelor’s and master’s degree courses. It was the first university in Azerbaijan to provide education in European and some modern Oriental languages. Many of the faculty are respected academics in their own spheres and have received national and international awards and scholarships.

Could you begin by outlining the history of AUL and telling us a little about its student body and academic potential?

In 1940, the independent Institute of Foreign Languages was established by decision of the Azerbaijan People’s Commissariat for Education to meet the increased demand for foreign language professionals. When the Great Patriotic War [the Soviet name for the Second World War – ed.] began in 1941, the institute was not able to continue and was turned back into the Faculty of Foreign Languages of the Azerbaijan Pedagogical Institute. In the war years, the interest in learning foreign languages increased.

On 10 December 1947, the Azerbaijan Soviet Socialist Republic (SSR) Cabinet of Ministers adopted a resolution “On the Training of Foreign Language Teachers” which led, the following year, to the re-creation of the Azerbaijan Institute of Foreign Languages. The institute operated until 1959. In the first academic year it had faculties of French, German and English and eight departments; later the number of departments increased to 12. 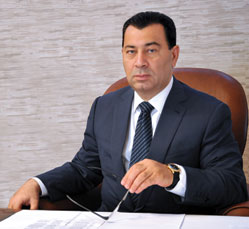 In 1959, the institute was merged with the Akhundov Azerbaijan Institute of Russian Language and Literature. In 1973, the Azerbaijan Pedagogical Institute of Foreign Languages was established as an independent body. In 1984, translation courses were introduced at the institute. Today, we train translators and interpreters in English, German, French, Italian, Spanish and Korean. Courses in philology, international relations and regional studies were introduced later.

The university now has 21 bachelor’s and 16 master’s programmes taught in eight faculties. We have more than 4,000 undergraduates.

It was when the national leader, Heydar Aliyev, was the first secretary of the Azerbaijan Soviet Socialist Republic that our institute was separated from the Azerbaijan Akhundov Institute of Russian Language and Literature and the Azerbaijan Institute of Foreign Languages was established. I consider Heydar Aliyev’s decision to turn the University of Languages into a separate centre for foreign languages as a step towards the political future of independent Azerbaijan. Why do I think that? Because in 1994 it was the Institute of Foreign Languages that arranged the translations of the documents and presentations on Azerbaijan’s foreign policy etc. at the signing ceremony of the Contract of the Century [the oil deal involving a consortium of foreign companies in the development of Azerbaijan’s Azeri, Chiraq and Guneshli oil fields].

Since 1993, AUL alumni have been representing Azerbaijan at the diplomatic level throughout the world. The deputy head of the Azerbaijan Presidential Administration and head of the Department of Foreign Affairs, Novruz Mammadov, Minister of Youth and Sports Azad Rahimov, Minister of Culture and Tourism Abulfas Garayev and Azerbaijan’s ambassadors to Great Britain, France and Italy all graduated from our university. Who else should I mention? The Azerbaijan Ministry of Foreign Affairs’ army of diplomats are our alumni too.

The Azerbaijan University of Languages has two important functions. The first is, of course, its academic function – the training of specialists. It trains professional interpreters, philologists, linguists, international relations specialists and journalists. That is one priority. The second priority is to introduce Azerbaijan to the world and to show the world to Azerbaijan. If world cultures are taught at the Azerbaijan University of Languages on an academic level and if it introduces Azerbaijani culture to the world, then we are doing a great job for our nation.

The number of higher education institutions teaching modern languages has increased recently. What does AUL do to remain competitive?

That’s a very timely question. There are dozens of higher education institutions in Azerbaijan that consider teaching foreign languages a priority. However, the majority of the specialists working there are graduates of the Azerbaijan University of Languages. We are proud of that. AUL alumni are the basis of such institutions as the Azerbaijan Diplomatic Academy, the Baku Higher Petroleum School, Baku branch of the Moscow Lomonosov State University, Khazar University, Western University, Nakhchivan University, and others. 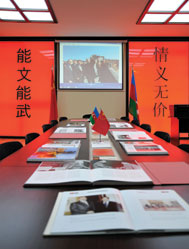 According to figures from the State Students Admission Commission this year, we are in first place for languages. So we are not afraid of the competition, we welcome it. For example, when another higher education institution asks us for specialists, I am glad to send the best specialists there. Because a university that has high-level specialists will also develop, and if it develops, then we will develop too and get even better.

During the Soviet period, mainly European languages were taught at the Institute of Foreign Languages. After Azerbaijan gained its independence, the teaching of Oriental languages began. Which languages are taught at the university now?

From the 1960s, English took competitive advantage over French and German at the Institute of Foreign Languages. Now the advantage is so great that other languages are a long way from competing with Shakespeare’s mother tongue. However, Azerbaijan should not be limited only to English, French and German. AUL takes the teaching of world languages very seriously. In 2000, when I was appointed rector, the university taught just a few languages – English, French, German and Spanish. In a short period, we introduced most of the west European languages – English, French, German, Spanish, Italian and Norwegian.

Today, Arabic, Hebrew, Indonesian, Malay, Hindi, Chinese, Japanese and Korean are studied to a high level at AUL. Teachers are both Azerbaijani and foreign. Although the Baku Slavic University is next-door, we also focus on Slavic languages – Polish and Russian.

The university has close business relations with Greece. Greek is taught here as an elective. We are in negotiations on teaching Hungarian. We don’t forget about our neighbours either – Georgian and Armenian are taught at the university. The university, which began with three languages, now teaches more than 20 languages. However this is not a limit. The number of languages is increasing every year and our interests are spreading more widely.

Are there plans to introduce the study of ancient languages, such as Assyrian, Sumerian, Hebrew or Greek?

If you work substantially on any language and do not learn the history of that language or its roots, this is unprofessional. Moreover, there are living languages and dead languages. Without learning Latin it is very difficult to understand philology and linguistics, in general. Language is a world that tells you where you came from, where you are and where you are going.

What are the most recent developments in teaching at the AUL?

We are opening modern language centres, which have material about all aspects of life in the countries where that language is spoken. In 2012, experimental language centres began to open in the university. The Chinese Centre and Library opened in June 2013. The centre is managed by well-known Azerbaijani specialist on China, Rafiq Abbasov.

How is Chinese taught at the centre? I think that it is impossible to learn Chinese without knowing Chinese history, its ancient philosophy, calligraphy and traditions. I mean that you need to know the roots of Chinese culture if you are to make yourself understood in China. You cannot learn Chinese if you don’t know Confucius and Lao Tzu.

This is why the university has other language centres too: for example, the George Sand French Centre, the German Goethe Institute, Scandinavian, Italian, Indonesian and Malaysian centres. I should add that we are the only university in the country to have such centres.

The university has various projects for teaching modern English. We have special relations with the British Council. We have made contacts with British universities so that after studying here for two years our students can continue their studies there. The Azerbaijan University of Languages closely cooperates with the universities of Essex, Glasgow and Suffolk. 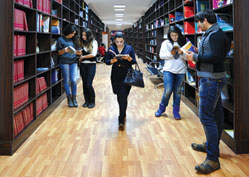 Three years ago, the AUL was the first Azerbaijani university to receive a grant from the European Union. The grant allowed us to study the management of translation, and language development at universities in Great Britain, Germany, France and Italy, and bring the most contemporary experience to Azerbaijan and I think that we achieved the aim.

Today, you can see how rapidly the university is modernising. We are the only university in Azerbaijan to have the latest equipment for simultaneous translation.

Earlier this year the Azerbaijan University of Languages (AUL) added to its list of language centres when it opened the Chinese Language and Cultural Centre and Open Library. The ambassador of the People’s Republic of China to Azerbaijan, Hong Jiuyin, attended the opening alongside state and government officials, diplomats and members of parliament.

Relations between Azerbaijan and China have been developing rapidly for several years now, including in education, the director of the centre, Rafiq Abbasov, told Visions. Azerbaijani students study in China, while Chinese is taught in Azerbaijan.

There is very fruitful cooperation between China and Azerbaijan in all fields, especially politics. The establishment of this centre will also foster the development of relations between the two governments. This is not only an education centre, but a significant hub for friendship between China and Azerbaijan. Thousands of books at the new library are openly available to anyone who is interested as well as teachers and students of the university. I hope that the number of books will eventually grow.

The opening of the Chinese Centre at the university is an important step towards expanding relations with Chinese universities, Rafiq Abbasov said. AUL already collaborates with Sichuan University in China and plans to expand links with Chinese universities, exchange students and hold joint conferences and events. This will all help to strengthen relations between Azerbaijan and the People’s Republic of China.

Last year AUL began a Chinese language major in the International Relations and Regional Studies Department. The first 10 students have already started learning Chinese. The students will also study the history, culture and traditions of China and in time be able to teach Chinese.