Shipwrecks and Ceramics- Archaeology off the Absheron coast 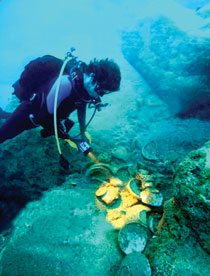 A diver finds fragments of pottery on the Caspian seabed
Underwater archaeological exploration along the coast of Azerbaijan is uncovering fascinating artefacts, proving inter alia that part of the settlement of Bilgah in Absheron was once situated on a lower terrace, which is now beneath the sea. The findings from the underwater expeditions mostly comprise ceramics, jewellery, domestic items and copperware. An interesting collection of faience from the 16th to 18th centuries has also been assembled.

The ceramic fragments found underwater include many imported pieces. There is Chinese and Iranian faience, which are sometimes very difficult to tell apart. Fascination with Chinese “blue” faience and its high value led Iranian ceramicists to imitate the Chinese masters. The great demand for this china in Europe encouraged the Iranian ceramicists, who at the time were much more skilled than their European counterparts, to produce imitation Chinese faience and send it to Europe. Iranian faience was at its peak during the Safavid dynasty (1502-1736). The major centres of Chinese-style ceramics were the cities of Kerman, Kashan, Yazd and Mashad.

However, scarcely visible features do distinguish authentic Chinese faience from its Iranian imitations: first of all, the density of the fragments and the Chinese artistic tradition. The blue cobalt ware discovered in Bilgah is typical of one category of Chinese ceramics. The fragments of Chinese faience have been painted with cobalt blue, and have a variety of motifs.

The dishes and cups are decorated with a complex interlacing of floral and geometric designs, while inside are landscape motifs with cliffs, plants, birds and animals. On one of the fragments is a depiction of a turtle in the water. One vase has a very curious painting on its side of two figures with Chinese features, dressed in Chinese clothing. Large fragments of Chinese celadon-ware are also very different from the Iranian versions.

Authentic Chinese celadon dishes have been discovered off the coast of Bilgah. Such dishes are known to have been in great demand in Europe thanks to the rumour that they changed their light-green colour when poison was present in the food.

Finds from a shipwreck

The remains of a sunken ship were discovered eight-nine metres underwater behind a ridge to the left of the Amburan headland. One of the divers found an interesting collection of items inside the ship including iron knives, a silver scoop and other artefacts. The silver scoop and knives were encrusted in a hard stone lump. The lump of sand, shells and pebbles had to be smashed in order to get the items out. The silver scoop was made in Novgorod in north-west Russia and dates to the late 16th-early 17th centuries. 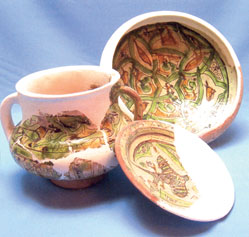 Novgorod was a large jewellery centre and home to a new form of precious plate, including the golden and silver dipper or scoop, which later became widespread all over Russia. The style of Novgorod silversmiths comprises a combination of laconic traditional forms and detail, inspired by west European jewellers. The small dipper discovered at the bottom of the Caspian Sea is a sample of this school and is very similar to one that is kept in a museum in Moscow.

It is an oval vessel with a cast handle that bears a mascaron – the face of a man in a wig. The scoop is decorated with stripes and rests on a faceted tray with legs in the form of three standing lions. Inside the scoop is a round metal plate with another lion lying on top of it, lifting his head and switching his tail. There is a line of clear inscription along the crown of the vessel: on one side it says “drinking the cup of human kindness”, but only the word “merriment” can be made out on the other, chipped side. Such inscriptions are also typical of the style of Novgorod silversmiths. On the inside the scoop is gold-plated and decorated with flowers. The scoop is a beautiful example of the silversmith’s craft in Rus, a balance of elegance and simplicity, severity and serenity of form, correct proportions and correlation of the parts with the whole.

The iron knives found with the scoop are also fascinating. The quantity and packing of the knives indicates that they were probably commercial merchandise. The knives are small, only 18 cm long, and have a single blade with a wooden handle, which has a typical bronze plate covering on the front end. The wooden handles are 7 to 8 cm long and have four iron rivets in different places. Where the handle narrows as it joins the blade, bronze hoops have been inserted as guards. The knives were placed in pairs in leather sheaths. The remaining pieces of leather have the clear impression of decorative designs. 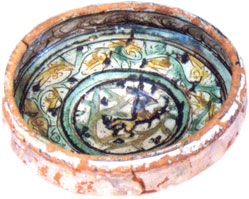 Base of a monochrome dish, Bilgah, 12th century

Similar iron knives with characteristic detachable plates on the sides were earlier found during archaeological excavations in Moscow and Sukhumi. The iron knives discovered off the Amburan headland can be dated to the late 16th, early 17th centuries. The knives were made in Vologda, north-east of Moscow, which was famous for the production of axes and knives. Wares produced in Vologda were sold widely on the domestic market and also exported abroad. Axes and knives were among the city’s major exports.

Historian Marya Vasilevna Fekhner wrote: Iron knives were exported to Iran. In 1595, 200 “takhil” knives were brought from Moscow by the Qizilbash merchant Ali Khosrov and, in 1601, 1.5 barrels of knives were bought for Shah Abbas.

The artefacts, discovered in the Russian ship that sank off the Amburan headland, are physical evidence of trade between Russia and Azerbaijan in the 16th-17th centuries, which was already well-established at that time. “Beads” and “adzes” were other goods regularly carried by Russian ships.

The fact that there was a seaport in Bilgah near the Amburan headland in the late 16th century shows that the level of the Caspian Sea must have been 5-6 cm lower than it is now. Only at that level would the submerged rocks, which make this coast dangerous for swimming, have been exposed and formed a natural breakwater, creating a small bay to serve as a harbour. The sea around Kalag and Amburan is a promising area for more underwater archaeological exploration. In 1987 the History Museum of Azerbaijan conducted an underwater archaeological expedition in a new area for archaeology – the sea between the islands of Pirallahi (Artem), Chilov (Jiloy) and the Gurgan headland, making its base on Baliq dash (Fish Rock) island. This region is especially interesting as it is the oldest sea passage around the north-east tip of the Absheron Peninsula towards Baku Bay.

Before the construction of the causeway connecting Pirallahi Island to the Absheron Peninsula, the sea lane between them allowed even tankers to pass. At one time, there was a ship isolation area and customs office at the causeway. Ancient and medieval sailors clearly used to use this route. In the 1950s G.M. Aslanov discovered archaeological material from the 11th-12th centuries just off the coast of the Gurgan headland.

Graves were discovered during construction of the causeway. I.M. Jafarzadeh found a bronze Scythian arrow in one of the graves. The archaeologist concluded that this was the grave of a warrior, who took part in a battle against the invading Scythians in the 7th century BC and was shot with the arrow, the tip of which was slightly bent by the blow.

The expedition began by looking for an underwater cliff after which the seabed would drop sharply. The ruins of the old settlement of Gurgan were thought to be on top of the cliff, which constituted the old shoreline. Three buoys were placed 500 metres apart from each other along an isobathic line (where water is the same depth). The archaeologists began to search in a circle from the buoys. Towards the shore, the seabed was covered in a significant layer of shells and sand; behind the isobathic line the seabed was uneven, reaching different heights, and heavily overgrown with algae and seaweed.

The entire strip lies approximately 2 km from the current shoreline of the Gurgan headland. Then the search continued nearer to the coast. The researchers installed a controlling base buoy behind the red buoy at the Gurgan headland and investigated within a radius of 250 metres to the north, the same distance to the south and towards the shore. A sunken kirzhim [a flat-bottomed, single-masted boat that plied the Caspian-Ed.] was discovered underwater, north of the red buoy. Fragments of plain and glazed ceramics were found nearer to the shore. As a result of this work, fragments of fine red-clay vessels were found on the seabed. Most of the fragments are red or brownish-red, have a ribbed surface with the traces of concentric glazed lines while some have a vaguely corrugated surface. The fragments are mainly from small pitchers. They bear the signs of traditional ancient and early-medieval ceramics and are similar to Baku coloured ceramics dating to the 11th-early 13th centuries, discovered in the Icheri Sheher (Baku’s old walled city).

It should be noted that after the causeway was built in the 1940s, the shore of Gurgan headland became accumulative rather than abrasive. This explains why the ruins of Gurgan settlement were covered in alluvia and new deposits. Only in the coastal strip, where the breaking waves cause partial abrasion, is a small part of the cultural layer exposed. The ceramics were part of this layer.

The waters of the Absheron archipelago conceal a number of sunken ships. Some 60 ships sank in this archipelago between 1873 and 1898 alone, according to a map of the Caspian showing the sites of shipwrecks. How many more sunken ships there must be off Azerbaijan’s coasts. Watch out for news of more finds, and maybe hidden treasure, on the Visions website.

Shirbey Aliyev: Adminstrativnyye karty territorii Azerbaydzhana i ikh izmeneniya za period 1813-1970 – Istoricheskiy obzor i analiz kart Kaspiyskogo morya do nachala XIX veke (Administrative maps of the Azerbaijani territory and changes in them for the period 1813-1970 – historic review and analysis of maps of the Caspian Sea to the start of the 19th century). Articles, Baku, 2007