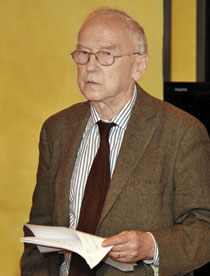 Polish-American scholar Tadeusz Swietochowski is acknowledged to be among the foremost specialists on modern Azerbaijani history. His books, including Russian Azerbaijan, 1905-1920: The Shaping of a National Identity in a Muslim Community and Russia and Azerbaijan. A Borderland in Transition, are required reading for serious students of the subject. Formerly professor of history at Monmouth University, he is now retired, but is still actively involved in research. He also holds honorary doctorates from Khazar University and Baku State University. Jeffrey Werbock interviewed him for Visions of Azerbaijan.

Where were you and how old were you when you first got interested in Azerbaijan and its history? What were you doing at the time, what was your background?

I acquired an interest in Azerbaijan and its history in my early 30s, when I had to submit a proposal for my Ph.D. dissertation at New York University. At that time I already lived in the US, after having received MA degrees in Turkic studies in Poland, and Arab studies in Beirut. I was anxious to produce a dissertation on a little known topic that was the Islamic-Turkic community under the colonial rule of Russia. The dissertation became the base for writing the book. Then followed the search for a publisher. One after another declined, usually on the grounds that the topic would not be of likely interest for readers. Perhaps, I was told, it would be easier if the manuscript dealt with Georgia or Armenia. Finally, I contacted one of the most prestigious academic publishers, Cambridge University Press, and the reply was positive. 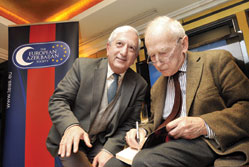 When did you first visit Azerbaijan? Why did you go there and what were your impressions?

My first trip to Azerbaijan occurred in the mid 1980s just before the publication of the book. I thought that I was the only scholar with a US passport in Azerbaijan, but I met in Baku an advanced American student, Audrey Altstadt. Baku was certainly a different world from what it is today. Poverty seemed to be accompanied by isolation, as well as fear. I cannot forget attempts to meet native scholars; some of them ran away in panic from being seen in the company of an American.

How often have you been back? When was the last time you visited and what were the circumstances? Do you hope to return there someday?

In the post-Soviet period I was visiting Azerbaijan quite often, usually every year or two, often in the company of my wife, who was an Islamic art historian at the New York Metropolitan Museum of Art. The last time we were in Baku was about three years ago. The health of my wife was one of the reasons that kept me from travelling.

What made you choose that particular time period to focus on in the history of Azerbaijan?
I chose the period of the Russian conquest and the Tsarist rule over Azerbaijan, as a case of the colonial impact on the native Islamic community, and the process of the gradual awakening of a national identity. 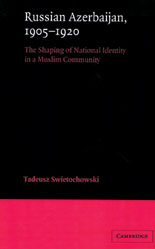 What is your view of that history? How do you think history is judging this time period nowadays?

The issue is somewhat controversial. On the one hand, Russian rule brought some European influences, such as the rise of the intelligentsia, modern education and spectacular urban growth for Baku with the oil revolution. On the other hand, it cannot be forgotten that Russia was the most backward of European powers. Azerbaijan became what came to be called the "country of two nations", the inhabitants of Baku and the poverty stricken, for a long time illiterate, countryside. And then Russia followed a policy of divide and rule with regard to the regional ethnic communities, most notably in the case of the Armenian-Azerbaijani conflict, which followed the immigration of Armenians from Iran and Turkey after the conquest of the South Caucasus by Russia. The conflict entered its first violent phase more than a century ago, from 1905 to 1907. Generally, the Russian authorities tended to be supportive of the Armenian side in the subsequent phases of the ethnic violence. Today, this violence is focused on the Nagorno-Karabakh dispute, which created close to three quarters of a million war refugees and internally displaced persons, but maintains the character of a frozen conflict. 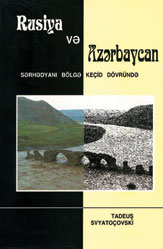 As concisely as possible, what is the key point that you made in your book, Russian Azerbaijan, 1905-1920. The Shaping of a National Identity in a Muslim Community? What would you like to emphasize?

The full length of the book's title explains much of the topic. My intention was to emphasize the impact of Russian rule, which also brought two revolutionary upheavals, 1905 and 1917. The first, with the weakening of the regime’s oppressiveness, allowed the nationally inclined political awakening in Azerbaijan. The second upheaval of 1917, with the abolition of the Tsarist regime, opened the way for the rise of the independent, democratic Republic of Azerbaijan, in existence from 1918 to 1920. The national identity of Azerbaijan was recognized by the Soviet conquest, which otherwise ended the independence of the republic. The book ends at this point and the Soviet period I dealt with in another work, Russia and Azerbaijan, A Borderland in Transition (Columbia University Press, 1995).

What is your opinion of books by other authors about Azerbaijan and its history? Have you read Audrey Altstadt's The Azerbaijani Turks, Svante Cornell's Azerbaijan Since Independence, Thomas Goltz's Azerbaijan Diary, or any other book you might want to mention?

I have read these books and used them for my research. Generally, I was impressed with their quality. The field of Azerbaijani studies in the West is still in an early stage of growth, even though the number of high-level publications exceeds those that you mentioned. Among them are Ronald Suny, The Baku Commune, 1917-1918; David Nissman, The Soviet Union and Iranian Azerbaijan; Holly Shissler, Between Two Empires: Ahmet Agaoglu and the New Turkey; Thomas de Waal, Black Garden: Armenia and Azerbaijan through Peace and War; Touraj Atabaki, Azerbaijan: Ethnicity and Autonomy in 20th Century Iran. I wish to also mention the impressive growth of native Azerbaijani historiography dealing with the 20th century, a process marked by the name of Ziya Bunyadov. Among some distinguished names are Jamil Hasanli, Eldar Ismayilov Arif Yunusov, Hikmet Hajizade, Aydin Balayev. Hopefully, some of their writings will be translated into English. 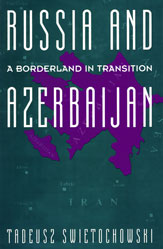 Do you plan to write anything else about Azerbaijan?

I am currently in the final stage of working on a book on Soviet and post-Soviet Azerbaijan. Also jointly with Eric Lepisto I am working on a new version of the historical dictionary of Azerbaijan.

Where do you teach? Do any of your courses cover the history of Azerbaijan?

I am now retired and concentrate on research projects and writing rather than teaching, Still, I offer every year a short course on the 20th century South Caucasus at the University of Warsaw. Most of the time I live in New York, where I keep my links to Columbia University.