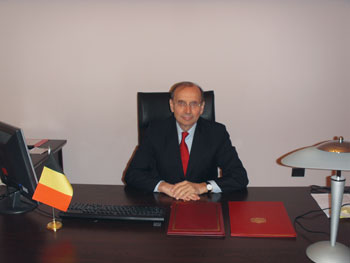 Visions of Azerbaijan magazine talks to one of the newer ambassadors in Baku, HE Mr Philippe Jottard, ambassador plenipotentiary and extraordinary of the Kingdom of Belgium to the Republic of Azerbaijan.

Mr Ambassador, how do you rate the current level of relations between Azerbaijan and the Kingdom of Belgium?

The political and economic relations between Belgium and Azerbaijan are excellent. The recent opening of the Belgian Embassy in Baku should of course strengthen and intensify them and this is my main task, in addition to exercising the local presidency of the EU.

And what about economic relations?

Our economic relations are fine but deserve further efforts as they are still below their potential. I hope that with the help of our trade attaches based in Turkey the trade flows and investments will increase, notwithstanding the less favourable global economic environment. May I add that Belgium has one of the highest export figures per inhabitant in the world and that Belgian products are renowned for their quality.

At present you are also representing the chairmanship of the European Union in Azerbaijan. What points of Azerbaijan-EU relations would you underline? And what role can Belgium play in Azerbaijan´s integration in the EU?

Belgium holds the local presidency of the EU on behalf of the Czech Republic which currently holds the rotating presidency of the Council of Ministers of the European Union. The launching of the Eastern Partnership – which has been proposed by the European Commission – is undoubtedly one of the main priorities of the EU presidency. A summit will take place in Prague on 7 May with the participation of the heads of state or prime ministers of the 27 member states and the six countries involved (the three South Caucasus countries, Ukraine, Moldova and Belarus). The Eastern Partnership aims at deepening the EU´s relations with its Eastern partners within the framework of the European Neighbourhood Policy. Its goal is to bring the six countries closer to the EU, short of membership. This goal is vigorously pursued by Belgium.

What do Azerbaijan´s energy resources and the energy corridor promise for Europe?

Azerbaijan enjoys a strategic position with regard to energy supplies to Europe. The implementation of the Southern Gas Corridor is and will be one of the main objectives in the years ahead. The Czech presidency is also planning another summit on 7 May in order to make this ambitious plan a reality. Belgium is one of the EU countries that has a dense interconnecting hub of different gas pipelines and a strategic position with the gas terminal in the seaport of Zeebrugge.

Today Azerbaijan is one of the few countries enduring occupation. What is the policy of the Belgian government towards the conflict? And what do you think are the reasons for the delay in the resolution of the Armenian-Azerbaijani conflict over Mountainous Karabakh?

As the European Union as a whole, Belgium fully supports the efforts of the Minsk Group for a peaceful solution of the conflict. The co-chairs of the Minsk Group are working with the authorities of both countries on proposals to bridge the remaining differences to secure a peace agreement based on agreed international principles. Such a peaceful solution will be beneficial for the stability and well-being of the region. Belgium underlines that only dialogue and negotiation can solve this kind of problem.

May the cultural and educational relations between the two countries be considered satisfactory? What projects in this sphere can be expected? And how do you think Azerbaijan is viewed from Europe today?

In Belgium, education and culture are mainly the responsibility of our three Flemish, French and German-speaking Communities. The number of projects implemented by them in Azerbaijan is limited at present. With the overall development of bilateral relations as well as of the relationship with the EU I will work to promote more interest from our Communities. As to the image of Azerbaijan in Europe, I believe there is a lot of work to be done to bring Azerbaijan more to the attention of the Europeans. In addition to the efforts of your government and the numerous EU programmes fostering people-to-people contacts, associations such as the European-Azerbaijan Society and your magazine Visions of Azerbaijan make a welcome contribution.

You have been the Belgian ambassador to Azerbaijan for just a couple of months. How do you find Azerbaijan? As an expatriate as well as a diplomat your visions of Azerbaijan and Azerbaijanis would be very interesting to our readers.

I am very happy to be in Baku which is an exciting and challenging post. I have been truly impressed by the beauty of your capital, especially its central districts. I have found the Azerbaijanis very friendly and welcoming and the expatriate community is also very lively and interesting. My ambition now is to discover the rest of the country and deepen my knowledge of your culture. As to my vision for the future, I want to see Azerbaijan much closer to Europe. This of course means a lot of hard work on both sides but it is also an exciting challenge for all of us.