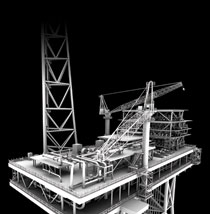 An artist’s impression of one of the new Shah Deniz gas platforms. Photo: BP
One president, one EU commissioner, four prime ministers and a posse of ministers for foreign affairs, economy and energy were amongst the foreign guests who converged on Baku in mid-December to witness the signing of a remarkable gas deal. The Final Investment Decision on the second stage of development of Azerbaijan’s Shah Deniz gas field was signed in the Heydar Aliyev Centre on 17 December.

This project will change the energy map of the region and Europe, Azerbaijani President Ilham Aliyev said in a speech at the signing ceremony.
Shah Deniz will, I think, become the contract of the 21st century, he continued, echoing the name given by his late father Heydar Aliyev to a major oil production agreement signed with international companies in 1994.
Shah Deniz-2, TANAP and TAP are among the world's largest energy projects. The projects will involve an investment of $45 billion, and more than 30,000 new jobs will be created in the countries along the route.

European officials have long been enthusiastic about the Southern Corridor, as it will help to diversify the EU’s sources of gas away from dominant supplier Russia.

EU Energy Commissioner Günther Oettinger said at the event: This decision to open the Southern Gas Corridor is a real breakthrough. Through its further enlargement, the corridor will have the potential to meet up to 20 per cent of the EU’s gas needs in the long term. 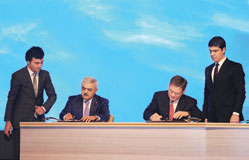 The presence of the Montenegrin president, Albanian, Bulgarian, Croatian and Georgian prime ministers, British and Italian foreign ministers and Turkish energy minister was evidence of the significance of the project to these European countries.

This is an important moment, marking the start of an infrastructure project on a monumental scale and a strategic shift in the way Europe accesses energy supplies, British Foreign Secretary William Hague said at the ceremony.

He gave four reasons to welcome the creation of the Southern Corridor:
First, it will increase our energy security by providing both an additional route and a new source for gas supplies to Europe… In the years ahead there is also the potential to expand the Southern Corridor to reach major gas suppliers in the Middle East, which could bring huge additional benefits for Europe’s energy security. Second, it will increase competition in the gas market in Europe, which will help keep energy affordable…

Third, the Southern Corridor will support our climate change objectives. Gas can give us the basic, reliable power supply we need while we invest in renewable energy, and it is significantly cleaner than coal.

Lastly, the development of the Southern Corridor will bring immediate benefits for all the countries along its 2,000 mile route, creating more than 30,000 jobs during the construction phase.

The foreign secretary expressed his pride at the contribution of British companies, above all BP, to the project.

We’re celebrating the final decision to go ahead with one of the largest and most complex endeavours ever undertaken by the global oil and gas industry.

Commenting after the ceremony, Lionel Zetter, director of The European-Azerbaijan Society (TEAS), told Visions: The term historic is much overused. However, it can certainly be applied to the signing of the Shah Deniz 2 contract. As President Aliyev said, this is the contract of the 21st century.

Map showing the route of Shah Deniz gas to Europe, via the South Caucasus, TANAP and TAP pipelines

The Final Investment Decision was not BP’s only good news at the event. Bob Dudley said that SOCAR and the Shah Deniz partners had also agreed terms to further extend the Shah Deniz production sharing agreement up to the year 2048 and undertake exploration and appraisal work on prospects in the area. So Shah Deniz is set to carry on delivering energy well into the second half of the 21st century.

The sheer number of transit and purchasing countries involved in the project adds to its complexity. TEAS Director Lionel Zetter again: SOCAR and the government of Azerbaijan have negotiated skillfully to pull off this deal. Not only have they retained BP’s expertise, they have also engaged with seven other countries. In terms of geopolitics they have reinforced their excellent relations with Georgia and Turkey, but also engaged on a far more meaningful level with Albania, Greece and Italy. Moreover, they have managed to engage with Croatia, Bulgaria and Montenegro – three countries which, initially at least, do not have much to gain from this deal. The clear implication is that TANAP and TAP are the start of a process, not the end.

The Shah Deniz 2 project entails several elements, according to operator BP. Offshore it includes drilling and completion of 26 subsea wells and construction of two bridge-linked platforms, while onshore there will be new processing and compression facilities at the Sangachal terminal, south west of Baku.

The total cost of the Shah Deniz Stage 2 and South Caucasus Pipeline (SCP) expansion projects will be around $28bn, BP said Sixteen billion cubic metres per year (bcma) of gas from Shah Deniz will be carried some 3,500 kilometres to provide energy for millions of consumers in Georgia, Turkey, Greece, Bulgaria and Italy. First gas is targeted for late 2018, with sales to Georgia and Turkey; first deliveries to Europe will follow approximately a year later. A further $17 billion dollars will be spent on TANAP and TAP.

Condensate production from the Shah Deniz field is expected to increase to 120,000 barrels per day, from current levels of about 55,000 barrels per day. In the shorter term, the Shah Deniz partners have agreed terms with Azerbaijan’s state oil company SOCAR on expanding production through the existing facilities by 1.4bcma. The production increase is already in progress and is expected to be complete by the end of 2014. 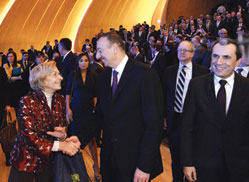 The documents actually inked on 17 December included the Final Investment Decision, which was signed by SOCAR President Rovnaq Abdullayev, and Gordon Birrell, BP's regional president for Azerbaijan, Georgia and Turkey.

A memorandum on the Southern Corridor was signed by the economy ministers of Albania, Croatia and Montenegro and Azerbaijan’s energy minister, Natiq Aliyev.

The Shah Deniz field was discovered in 1999 and developed by a consortium led by BP. Azerbaijan has been exporting gas to Georgia and Turkey from the Shah Deniz Stage 1 development since 2006.

It was announced on 17 December that one of the original partners in the Shah Deniz consortium, Norwegian company Statoil, was divesting a 10% share of its 25.5% holdings in Shah Deniz and the South Caucasus Pipeline. The buyers are SOCAR (6.7%) and BP (3.3%). Statoil will as part of this transaction receive $1.45 billion. The effective date of the transaction is 1 January 2014.

The transaction is part of Statoil’s plan for “rigid prioritisation of future investment”, Chief Executive Officer Helge Lund said. The company is having to be more selective in investments as record spending and rising costs put pressure on its free cash flow and ability to pay higher dividends, according to commentators.

Statoil also said it would not invest in the planned TANAP pipeline through Turkey, but would retain its 20 per cent share in the Trans-Adriatic pipeline, TAP.