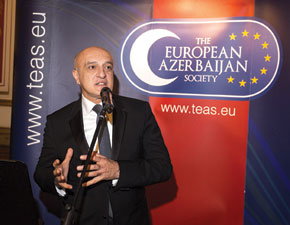 H.E. Fakhraddin Qurbanov, Azerbaijan’s ambassador to the UK
Style certainly matched content when The European Azerbaijan Society (TEAS) celebrated five years of work with a reception in London on 3 December. The setting was the classically elegant Locarno Suite in the Foreign and Commonwealth Office. For the ears there was atmospheric Azerbaijani, classical and tango music played by Sabina Rakcheyeva and the Deco Ensemble. The content included more than 300 guests embodying the range of TEAS’s endeavours: business, politics, the arts, journalism, academia and sport were all well represented and there was plenty of busy networking to learn more about the country and the opportunities it offers in every field.

TEAS Director Lionel Zetter welcomed guests and opened proceedings by introducing founder and chairman, Tale Heydarov. The chairman gave a quick résumé of the country’s early period of independence (1918-20), brief but ambitious in its achievements, including: Equal voting rights for women 10 years before their sisters in the UK. 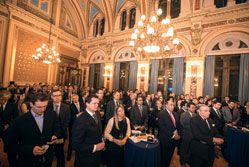 Listening to the speeches

Moving on to the milestones passed since the country emerged from the political and economic debris of the Soviet Union, Mr Heydarov highlighted 1994’s signing of the Contract of the Century to develop offshore oil fields and the subsequent rapid transformation of Azerbaijan’s appearance and infrastructure. With stable growth established, the conditions were ripe for the country to move onto the international stage and TEAS was formed to assist in the process of familiarising the world with Azerbaijan. In its five years it has set up office in six European states to promote the country’s culture – including the remarkable harmony between the many ethnicities and religions – and to encourage exchanges of trade and investment. Of course, he said, Europe is also looking to Azerbaijan to help ensure its energy security.

Recalling the country’s support for western campaigns in Iraq and Afghanistan, he pointed out that its own principal political problem, the Nagorno-Karabakh conflict with Armenia, remained unresolved. So too did the futures of around one million IDPs and refugees, whose human rights to home and property seemed to be something of a blind spot for campaigners.
Help us work towards a diplomatic solution to the conflict with Armenia, based on the principles of international law and the outstanding UN Security Council resolutions. 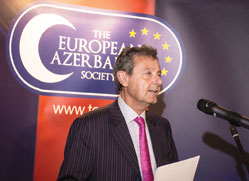 Mr Heydarov ended by expressing TEAS’s pride in the country’s achievements and indicating the many common interests of benefit to Azerbaijan and other countries in Europe. TEAS’s mission is:
Only to promote knowledge about our country, including the business opportunities it offers to the wider world.

H.E. Fakhraddin Qurbanov, Azerbaijan’s ambassador to the UK, recalled that he had been present at the TEAS launch and congratulated the organisation on its great job in promoting Azerbaijan and contributing to person-to-person relations: And I am pleased to say that relations between the UK and Azerbaijan are becoming stronger every day… I look forward to the next five years. 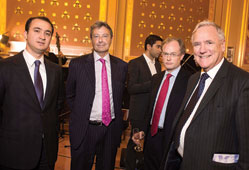 Of course, Azerbaijan is still best known in Europe for the hope it supplies with its resources of energy, as acknowledged by Edmund Hosker, director for International, Europe & Energy Security at the Department of Energy and Climate Change: Azerbaijan is a major energy producer, and is where mechanised oil extraction and modern oil transportation began. It is excellent that the planned Southern Corridor will bring gas from Azerbaijan to Europe. Azerbaijan will play an integral role in ensuring European energy security, both as a producer and as a transit route.

And he emphasised the strong business connections that result: The UK remains the greatest contributor of Foreign Direct Investment (FDI) into Azerbaijan. Over 300 UK businesses are now in this country, and this figure is set to grow. 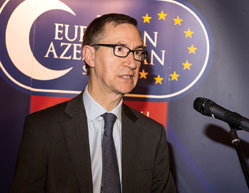 Edmund Hosker, director for International, Europe & Energy Security at the Department of Energy and Climate Change

Christopher Pincher MP is a member of the Energy and Climate Change Select Committee in the UK Parliament and an energetic chairman of the Azerbaijan All-Party Parliamentary Group (APPG). Expressing his pleasure in celebrating with TEAS, he commented on the society and progress that he had witnessed at first hand in Azerbaijan: The mosques, synagogues and churches in Baku. It is a stable nation in a geopolitically sensitive part of the world.

And the opportunities that arose for western companies from its resources: The Shah Deniz gas field is the second largest in the world.

He also stated the UK’s desire for a peaceful resolution of the Nagorno-Karabakh conflict and ended by looking forward to Celebrating further successes for TEAS and for Azerbaijan in five years’ time. 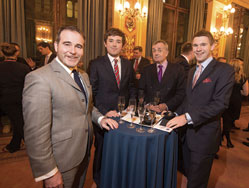 (From the left) Christopher Pincher MP, chair of the Azerbaijan All-Party Parliamentary Group and member of the Energy and Climate Change Select Committee; Harry Poultney; Simon Gordon; and Alistair Whitby

Following the speeches a short film illustrated TEAS’s development over the five years, from its launch in London to the newest office in Istanbul, via Baku, Paris, Berlin and Brussels. More than 27,000 people have attended TEAS events; from business forums to book launches, from concerts to commemorations, cinema to symposia, debates to delegations, festivals to football.

A spirited and convivial event in a striking venue with historical international associations was the perfect way to celebrate progress and set out the TEAS stall for the next five years.