Countdown to the 2015 European Games 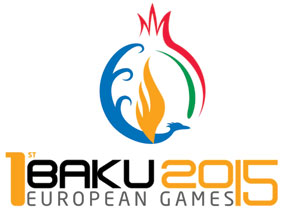 On 20 October, Baku started the 600-day countdown to the opening ceremony of the first-ever European Games, which will be held in the city on 12 June 2015.

The people of Baku and the whole of Azerbaijan are looking forward to welcoming athletes, officials, media and spectators from across Europe, Azad Rahimov, Azerbaijan's minister of youth and sport and CEO of the games, said on countdown day. Our aim is to demonstrate the warmth and hospitality of Azerbaijan, the host city and its people and to show what we have to offer as a new destination for sport, business and tourism.

It was back down to work on 28 October when the European Olympic Committee’s Coordination Commission came to town to inspect progress in preparations for the Games. First Lady Mehriban Aliyeva, chair of the Baku 2015 First European Games Organising Committee, opened the second meeting of the coordination commission in Baku:

The European Games will be held in Azerbaijan for the first time. It marks a new era in the European sports movement. I would like to again underline that the Games are supported by the people of Azerbaijan who are excited and proud that our country will play a very important role in the history of European sport.

After two days of presentations, meetings and visits to the venues, the Athletes’ Village and other key sites, the EOC inspection team praised progress. Addressing a press conference in Baku on the 29th, EOC Coordination Commission Chairman Spyros Capralos said he was “impressed” with overall planning and preparations by the Baku 2015 Organising Committee. The Baku 2015 Games will leave a great legacy of new venues, infrastructure and inspiration for the communities and youth of Azerbaijan and Europe as a whole.

The venues are fantastic. There are no worries here whatsoever about infrastructure – it is superb, EOC Chairman Patrick Hickey told insidethegames.biz.

He had words of praise for the Athletes' Village too, which is expected to host up to 10,000 competitors and officials. The Village is amazing. This will be a big disappointment for many athletes when they go to Rio [2016 Summer Olympic Games] after the quality of the accommodation here. 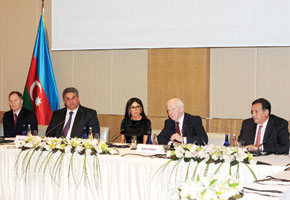 So what did the inspectors see when they came to Baku? First of all, the organisers have separated the venues into “clusters” which the inspectors visited.

The Village Cluster, around Koroghlu metro station, includes the Athletes’ Village, the Olympic Stadium, which will host the opening and closing ceremonies, the National Gymnastics Arena and Shafa Stadium, which will host the Archery competition. As anyone travelling on the busy thoroughfare past the stadium at Boyuk Shor can see, work is progressing well. Construction of a dedicated substation to provide power to the 65,000-seat venue began in late November. The National Gymnastics Arena is even nearer to completion.

The second area is the Flag Square Cluster, which includes Eurovision venue the Crystal Hall, the Baku Sports Hall (formerly the Palace of Hand Games) and the Baku Aquatics Centre, which is under construction. The Crystal Hall will host volleyball and the Sports Hall badminton, while swimming, synchronised swimming and diving will be at the Aquatics Centre. Temporary water polo, beach volleyball and basketball arenas will be constructed at the Flag Square Cluster too.

Greco-Roman and freestyle wrestling will be held in the Heydar Aliyev Sports and Concert Arena, boxing at the Sarhadchi Centre in the Baku suburb of Ahmadli and taekwondo, judo, karate, table tennis and fencing at the Baku Expo Centre near the airport. The Baku Shooting Centre is being upgraded ahead of the Games. Temporary velotracks will be created for BMX and mountain biking. Beach soccer will be played at the Dalga Arena and parts of the triathlon at Bilgah Beach.

The canoe competitions will take place at Mingachevir reservoir, some 290 km west of Baku.

Freedom (Azadliq) Square in central Baku will provide a dramatic setting for the triathlon finish. The inspectors saw how the Games will integrate some of Baku’s stunning architectural landmarks and public spaces, including the seafront promenade and soaring Flame Towers, into the Games.

The EOC were also impressed by the Organising Committee, which has recruited several highly regarded Games operations experts and planners, many of whom worked on the acclaimed London 2012 Olympic and Paralympic Games.

As we reported in the January-April issue of Visions, the biggest absentee from the Games is likely to be athletics, as the EAA, the European governing body, already have competitive commitments in 2015. However, street athletics could feature instead, according to a report by Duncan Mackay on Insidethegames.biz. Mackay wrote that European Athletics have agreed to an event held on a temporary track in Baku.

Such events normally take place in purpose-built, temporary outdoor arenas, which feature a four-lane sprint track, specially constructed to meet the requirements of the International Association of Athletics Federations. Popular field events, like the high jump and pole vault, can also be part of the programme.

The concept has been pioneered in England, where events in Manchester and Newcastle have proven popular, attracting the likes of Usain Bolt and Mo Farah to compete. 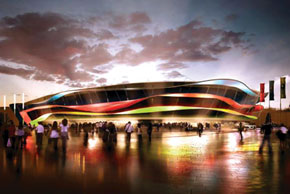 The official logo for the first European Games was unveiled simultaneously in three cities – Baku, Rome and Madrid – on 23 November. The logo, in the shape of a pomegranate, with a flame and mythical bird inside, was conceived by 35-year-old Azerbaijani Adam Yunisov. He says the logo brings together five core elements that have shaped the country’s ancient and contemporary culture and aspirations – water, the mythical Simurg bird, carpets and pomegranates. The logo was chosen in an open competition.

Commenting on the design, the artist said: I wanted to reflect the passion and aspirations that the people in Azerbaijan have and share for these first-ever European Games, to be innovative and inspirational in spirit and in sport. This is a celebratory logo, which embodies that vision.

In Rome the logo was unveiled at the 42nd General Assembly of the European Olympic Committees. EOC President Patrick Hickey said that this was another important milestone in preparing for the Games.

Europe, for the first time, will have its own continental multi-sport event. For many European athletes, this event will be an important step on the journey to one day wearing their nation’s colours as a competitor in the Olympic Games.

In Baku, former Olympic champions welcomed the new logo. Speaking at the launch, wrestler Farid Mansurov, who won gold at the 2004 Olympics in Athens, commented: Baku 2015 promises to provide career-defining opportunities and moments for athletes, high quality sporting action for fans and inspiration for young people. To wear this logo is to be a part of shaping the future of European sport. 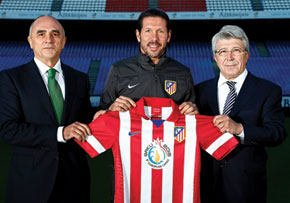 Azerbaijan’s ambassador to Spain, Altay Efendiyev, Atletico Madrid coach Diego Simeone and club President Enrique Cerezo display the new shirt with the Baku 2015 logo. Photo: Baku2015.com
Zemfira Meftakhetdinova, a sport shooter who won two Olympic medals in skeet, including gold in Sydney 2000, added: As an Azerbaijani sportswoman, this is a logo that makes me feel proud of our country’s emergence as a European centre for sport, business and tourism.

The unveiling in Madrid revealed the logo on Spanish soccer club Atletico Madrid’s new strip. The kit is a part of a strategic sponsorship deal that the Copa Del Rey holders signed with Azerbaijan last year.

The logo seemed to be lucky for Atletico as they went on to hammer La Liga rivals Getafe FC 7:0 at home, with David Villa scoring two of the goals.

French La Ligue team RC Lens are also to have the logo emblazoned on their shirts.

Olympic torch for the Land of Fire?

Plans for a torch relay and ceremony have yet to be announced. The tradition of bringing the flame from Mount Olympus in Greece will most likely be observed but, as the Land of Fire, Azerbaijan offers striking opportunities for a torch ceremony at the Fire Temple in Surakhani or Yanar Dag (Burning Mountain). Whatever the decision on the torch, the European Games 2015 in Baku promises to be a spectacular event.