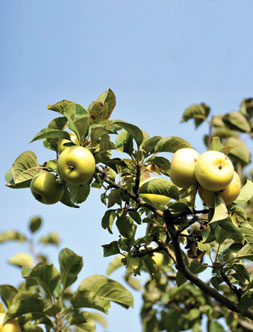 Perhaps no other fruit features in so many legends and traditions as the apple. In dozens of stories the apple has near mystical status, while it is one of the healthiest and commonest fruits around the world. Azerbaijan has many songs and proverbs connected with apples, but one region has more apple traditions than most – Quba District, Azerbaijan’s ‘apple country’. Visions Jeyran Bayramova headed north to Quba to attend the annual apple festival.

Every autumn Quba celebrates an Apple Festival. Not only the trees, but the town too turn red and gold, as so much is painted in apple hues. Even the local peoples’ rosy cheeks recall the fruit.

The apple doesn’t fall far from the tree. This proverb seems to be common not only in Quba, but in many parts of the world as well. Usually it is used to describe someone who takes after a parent or grandparent, in the Azerbaijani context mostly from a negative point of view.

In the creation stories of Judaism and Christianity, the apple is the forbidden fruit, which Adam and Eve eat in the Garden of Eden. As a result, they are banished from paradise. (In Islam, there is some disagreement over whether the forbidden fruit was an apple or not.) The apple features as a symbol of love and sexuality in non-Abrahamic myths and traditions – for example the Greek goddess of love Aphrodite and her Roman counterpart Venus are often shown holding an apple. These associations have continued down the centuries – German Gothic sculptor Daniel Mauch’s statue of Venus Holding an Apple, or Cranach’s The Virgin and Child Under an Apple Tree are just two famous examples.

The fruit features frequently in fairy tales, again often negatively. In the tale of Snow White, it is a poisonous apple that puts the heroine to sleep. Though history knows many positive stories, such as the famous anecdote that Sir Isaac Newton discovered gravity when he saw an apple fall to the ground from its tree. And it was the apple that was chosen as the name of Steve Jobs’ new brand, now used by millions of people worldwide.

Not only the nickname of Quba’s apple festival, the Big Apple has long been an unofficial name for New York. The term “the Big Apple” was coined by touring jazz musicians and horse racers in the 1920s, who used the word ‘apple’ as slang for any town or city. Therefore, to play New York City was to play the big time – the Big Apple.

A more official apple name is that of the former capital of Kazakhstan, Almaty. Alma in Kazakh, which like Azerbaijani is a Turkic language, means “apple” and the city’s name is often translated as “full of apples”. 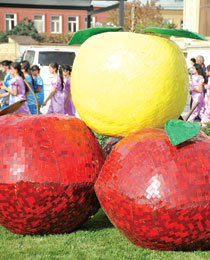 The Azerbaijani word for apple is also alma. There is a famous song here, in Azerbaijan – Almani atdim xarala, Qaldi sarala-sarala (I put an apple into a sack, to keep it nice and golden). Almost the same sacks filled to the brim with yellows and reds can be seen everywhere in Quba in autumn during the apple harvest. This is real apple country. Local people consider Quba the home of the apple, not surprisingly when you think that one-third of them are involved in apple growing in some capacity. The traditional varieties of apple grown in Quba include the Ag alma (White apple), Qizil Ahmad (Red Ahmad) and Jirhaji while the imported varieties Golden Delicious, Palmet and Simirenko are usually used to make juice.

All these varieties were on display at the Apple Festival in the middle of October. The festival included competitions with categories such as the “the biggest apple”, “the sweetest apple” and “the most successful farmer”. Troupes performed traditional dances, while chefs cooked up delicious kebabs Quba-style and many other local dishes besides. Apples were of course a main ingredient – jams, juices, dried apples, apple cake and so on. Visitors to the festival, foreigners and locals alike, could watch performances while enjoying their meal.

Eynulla Kheyrullayev, director of the Quba branch of the SEDA regional development organisation, told Visions that during the Soviet period when there was great progress in apple cultivation, they dreamed of having an annual harvest of 100,000 tonnes. However, at that time they never reached this goal. Now that almost half of the apple orchards have been revived, they have finally got their 100,000 tonnes.

Since the mid-1990s our residents have been given land under the privatisation policy. That was a successful attempt to push apple cultivation to a new stage of development. Indeed, it was quite difficult at the beginning, but years later, after private apple growers brought in new varieties of fruit and did their best to boost yields, progress in apple growing has been noticeable.

Eynulla say that some problems still persist, however. Apple growers don’t yet have modern equipment for harvesting and sorting the fruit without damage.

Our tractors have been used since the Soviet period, so they are old and need to be changed for new, modern ones. Moreover, farmers need to have equipment for sorting the apples; all the work is done manually which is a waste of time and labour. Besides, there is a problem with the subsidy for apple cultivation. It’s very small and goes only on fuel for tractors and fertiliser. For instance, farmers spend about 1000 AZN (about 1000 euros) to fertilise one hectare, which is 10 times more than the whole subsidy. So I think the government should increase the subsidy. 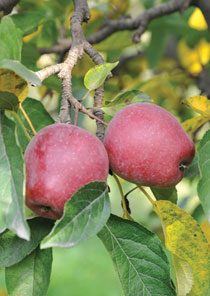 Mahammad Najafov is a 55-year-old apple grower who was raised in Quba. He used to work on a Soviet collective farm, but in 2002 privatised his apple orchards. The half of a hectare under his care yields annually nearly 20-25 tonnes of apples. Mahammad invited us to his orchard to see the harvest and how he manages his apple business. The first thing he told Visions was that apple growing incurs many expenses in the modern world.

We don’t earn much from the apple business. Imagine, one kilo of apples costs 30 gepiks (cents) in our market, which does not make much money for apple growers. Yet, we have to pay for fertiliser, tilling the land, pruning and other work. Besides, we are medium-sized producers and it’s quite difficult to take our product onto international markets; we wouldn’t be able to compete with the big producers. So first of all we need to have good conditions in our own markets.

Mahammad Najafov complained that there are few apple growers who can afford to keep their fruit in refrigerated stores for the winter season. It costs huge money to rent a storehouse, which Mahammad and his fellow farmers cannot afford. So instead they take tonnes of apples and store them at home. Nonetheless, Mahammad cares for his orchard with pleasure and hopes to find solutions to the problems in future.

Eat apples and be healthy!

Before we said goodbye to Mahammad, we were invited to try the fruit grown in his orchard. Mmm…very fragrant and fleshy! Not only is an apple tasty, it’s really good for you. The saying “An apple a day keeps the doctor away” comes to mind when you bite into an apple. No wonder they are one of the most cultivated and consumed fruits in the world and continuously praised as a “super food” or “nutritional powerhouse”. Apples are extremely rich in important elements like antioxidants, flavonoids and dietary fibre. The phytonutrients and antioxidants in apples may help reduce the risk of developing cancer, hypertension, diabetes and heart disease. Also, apples contain almost no fat, sodium or cholesterol.

Eat apples and be healthy! Mahammad said, carrying out а whole armful of apples. There were various sorts but our favourites were the Qizil Ahmads. Oh! That’s the king of our apples, Mahammad said. They are very rich in iron, so are very good for you. By the way, if you find a worm in your apple, don’t throw it away. Wormy fruit is natural and delicious. Worms always look for the best fruit, don’t they?