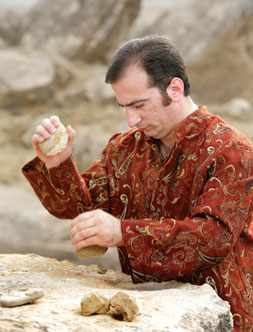 God gave me life. This is how I am.

And how he has been from the beginning… The young boy’s banging on saucepans and anything else that came to hand convinced his mother that he was a naughty child. The fact that he was the only one of seven children not to go on to higher education might have some marking him down in their estimation. However that ‘misspent’ childhood led to Natiq Shirinov becoming arguably one of the world’s leading drummers.

He was not a total anomaly in the family; there was music in the genes. His father’s line went back to Great-Great-Grandfather Ashiq Shirin in Goycha (now part of Armenia). Ashiq? A folk singer in these parts, usually self-accompanied on the long-necked lute called a saz and singing songs of love and heroics, often with a moral; something like a bard or minstrel. Grandfather Ashiq Idris, head of the Ashiqs’ Union, took his saz with him to World War II. Alas, neither returned; nor is there a recording of his reputedly wonderful voice.

Natiq also grew up to the sound of the qarmon (accordion) played purely for pleasure by his father, who might have progressed further had he not had an aversion to practising the scales demanded by his teacher. However, that is a talent that has been handed on and Namiq is now the qarmon player in his brother Natiq’s Rhythm Group.

The noise that annoyed Natiq’s mother was inspired by seeing naghara player Chingiz Mehdiyev on television and by the drummers who played in the tents at men’s wedding parties (a little more cultural than western-style stag parties).

These days it is different. My son Umid has learned from me, but I played the music in my head, it was natural, I knew what to play. And my first experience was at weddings.

The cry to be given a naghara first went up at around the age of seven, he recalls. A naghara? It’s a double-headed drum popular in the Caucasus and Turkey; held under one arm or between the knees, it is beaten with hands and fingers.

Children don’t always get what they want straightaway, and who can gauge the importance of the improvisation that sprang from frustrated desire? From saucepans Natiq graduated to a chair held and tapped between his legs, and this is how he entertained until at a farewell party for a brother who was leaving to do military service they took a daf – a large frame drum like a tambourine without the little cymbals – and nailed it to an old naghara frame. So impressed was an uncle that he went out and invested a generous 17 roubles, about two week’s wages, on the real thing, sending the boy to seventh heaven. His father was not so pleased when the naghara took precedence over schoolwork and he literally axed both instruments.

Natiq, however, simply reverted to the chair and from nine years old he was a regular at the Gagarin Pioneers’ House, practising his passion. Aged ten he took up position opposite Dom Soviet (Government House) on Baku’s seafront promenade.

I remember this every time I pass Dom Soviet.

This was the usual rendezvous for musicians and those who needed entertainment for weddings and other festivities. A man sat next to him and laughed at his pretension – a ten-year-old thinking he could entertain adults! Still, he took Natiq to another military service farewell party. Then to weddings, then to play in the intervals at mugham concerts.

A year later he was in his ‘ancestral home’ – Goycha – at a cousin’s wedding. As the request had come from the senior uncle, Natiq’s father could not object and so, with his brother on garmon, the boy entertained through a party that lasted seven days and seven nights; in between the ashiqs spinning their tales the naghara drove the dancing. 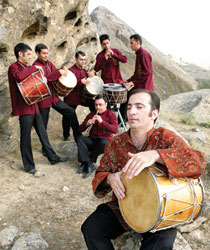 Natiq and his Rhythm Group at Qobustan

Enthusiasm and improvisation can take you so far, but without a solid grounding in the basics, you are likely to grind to a halt. Luckily, by now Natiq was in School No. 6 and in the class of a great teacher, Azer Aliyev. Enthusiasm, even with classes of 30-40 students, concerts in the Republic Palace involving 500 drummers, trips to Moscow and Tbilisi as part of the children’s music group Chuchelerim (My Little Chicks), but most of all that firm foundation in musical theory, constitute Natiq’s debt of gratitude to Azer muallim. In fact his teacher’s early death in 1991 left such a void that for a while the boy’s dedication to his art was shaken.

Destiny was not to be easily pushed aside, however, and the involvement in musical groups bolstered his determination to succeed and led to a tough decision:

To decide to be a good naghara player meant that I would not do so well at school… A lifetime is not enough time to study and to play really well. I’m not keen on musicians who play five instruments half well!

The die was cast and the choice has turned out well, professionally speaking. Click on Natig Rhythm Group on YouTube to see their success at the World Percussion Performing Arts Festival in Geumsan, Korea – taking the Grand Prix award. Or for the Natiq-devised act during Azerbaijan’s staging of the Eurovision Song Contest in 2012. Of course there is local pride in his achievements; he was made an Honoured Artiste in 2007.

And even without the qualifications for a ‘proper job’, the group leader relates that his happy personal life can also be traced back to the naghara; while playing at a wedding, aged 15, he met Sevinj, the girl he was to marry after a six year courtship – he’s a determined fellow! They now have three children, one of whom, Umid, has followed his father’s fingertips, joining the Rhythm Group aged 11 and already a four-year veteran.

With the tough career decision behind him, there was still an uphill struggle to justify the choice. In the difficult early 1990s, the first years of the country’s renewed independence, music suffered and what limelight there was shone on the tar and other solo instruments. The death of Chingiz Mehdiyev, until then the leading naghara player, cast the instrument further into shadow. Natiq set out to revive its fortunes. He stopped playing at weddings, where music serves mainly to provide volume and beat, and insisted that the instrument be taken seriously. By the end of the 1990s he was playing with leading mugham singer Alim Qasimov:

By 1999, in Alim’s trio, we were beginning to revive the naghara.

Azerbaijan’s geographical location and history hardly encourage isolationism and Natiq’s musical approach is similarly open; he recognised the fit between his instrument and other genres and was even presented with a diploma by music patron Nuri Ahmedov for the dimension he added to the jazz festivals of the noughties. However, there was still no rhythm group centred on the naghara and further study was necessary to achieve that dream. Not content with the 17 rhythms that he says provide the heartbeat for local traditional music, by 2001 he was studying Indian rhythms – in Moscow, flamenco – in Montpellier, African rhythms – in Adana, as well playing on tours with Alim Qasimov. He listened to America’s Billy Cobham, India’s Zakir Hussain, Turkey’s Ahmed Misirli and Uzbekistan’s Abbos Kosimov. 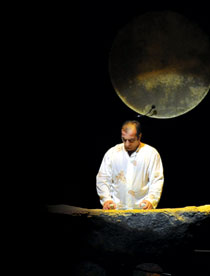 At a concert of Natiq’s Rhythm Group now you are in no doubt that you are immersed in Azerbaijani music, but all his research is driven by a desire to advance and new rhythms have duly appeared in the repertoire:

I have to play Azerbaijani music a different way – I have to develop it and not stay in the old way.

He has experimented on the instrument too: a bass naghara holed on one side and held between the legs (rather than under the arm). He read about ceramic nagharas being recovered from archaeological digs; he ordered 15 of them in 2010. Only one of those survived uncracked, but a ceramic model now features in performances, usually lit from inside. He compares its sound to the prehistoric Qaval Dash – more of that in a while. Not yet changed by Natiq’s experimentation are the ropes; others have done away with them, but you will notice how often they are tweaked in a performance to adjust the tuning and timbre of the drum.

You will have gathered by now that while a Shirinov concert is a thing of great joy, and despite his foreshortened formal education, he is for all practical purposes a professor of percussion; only the slightest encouragement launches him into a paean to the professional’s pleasure in the techniques of rhythm and the mathematical combinations possible. And the numbers extend to infinity:

Mugham and jazz go on a journey and return, but rhythm can go to any number of places and does not have to return to the same place.

Naturally enough for players of surely the earliest form of musical expression, history and tradition feature strongly in their performances. Azerbaijan is home to the prehistoric petroglyphs at Qobustan and alongside them rests the Qaval Dash. This is a huge rock supported at three points which produces amazingly resonant sounds when struck by smaller hand-held stones. A replica of the original now plays its part in Natiq’s modern interpretation of the rhythms of the ages.

Looking to the future

Now 38 years old, Natiq is very much in his prime and as the years advance his thoughts turn to the future of his instrument and like many other Azerbaijani musicians he is keen to nurture the next generation. Apart from son Umid, who he believes is truly gifted, he has a number of students, including those who have graduated to his group. And the ambition does not end there. Of course he wants to establish a rhythm school but he already works with a dance group and their choreographer and he sees himself in the future taking on more and more responsibility for the direction of larger performances – note: performance, not show.

Ours is a professional performance of an art. We have to help the audience to understand.

There is little sign of Natiq Shirinov easing back on the success he has earned at home and abroad. The very nature of his preoccupation forbids that, as he says:

If there is rhythm there is life.