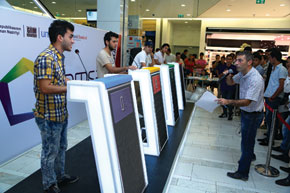 Celebrity quizmaster Rufat Abdulla puts a question to Khamsa contestans
A day out in a mall… What do you usually expect? A bit of shopping, a trip to the movies maybe, a chat with friends over lunch. But one day in September, my expectations were turned on their head when I walked into one of Baku’s smart shopping malls and ran into a group of young people crowding around something that looked like a game zone.

An enthusiastic young man in front of a banner bearing the message Intelligence Day was reading into a microphone. Four young men stood behind four lecterns, each with an LCD monitor, their hands poised over red buttons. The speaker turned out to be asking general knowledge questions and each player was trying to be the first to answer. If a player gave the right answer, his points increased on the monitor; if he gave the wrong answer, then he lost points.

“What’s going on here?” was my question to one of the guys in the crowd. “This is Khamsa, the national quiz game, we’ve all come here to compete,” came the reply.

“Khamsa (Xəmsə) is a team game that tests skill and intelligence,” explained Faig Huseynov. Towering over the crowd, this tall, exhausted-looking man was closely following the game. He was simultaneously giving advice to the computer operator managing the game software, watching the presenter, helping to give away souvenirs and giving interviews to TV crews. “We haven’t slept for two nights getting ready for this event,” he explained with an apologetic smile.

Faig is head of the Youth Intellectual Development Centre, which actually created the Khamsa game in 2007. Since then, he has been working to increase the game’s popularity not only in Azerbaijan but in many other countries in Europe and Central Asia. The main purpose of this game is to promote new approaches to learning and to increase young people’s interest in education.

I have been playing intellectual games since the 1990s, explained Faig. Quizzes teach you not only new information and facts, they help you to apply them in daily life, make you more confident and goal-oriented. Playing in teams also helps to learn how to build relations with other people to achieve common objectives.

Various quiz games are very popular in all post-Soviet countries. In 1975 the team game What? Where? When? with questions requiring a mix of general knowledge, logical deduction and insight, became a TV-hit across the USSR. It spawned many clubs where the game is played and led to similar programmes.

Faig and his team have competed in many tournaments in the former Soviet countries. “We have been successful in What? Where? When?, Brain-Ring and Jeopardy, winning many championships.”

Games were held in Russian as the competing teams were mostly from the post-Soviet countries.

Then one day in 2007, the Ministry of Youth and Sports with which I closely collaborated as president of the Ateshgah Baku Intellectual Games Club, asked me to do something to involve more young people in the games movement who do not speak Russian. This was how we came up with the idea of a national brain game: a game in which the working language was Azerbaijani.

This was the day that Khamsa was born. Faig and his colleagues began the hard work of bringing knowledge to schoolchildren and students in an interactive competitive format.

Why Khamsa? Because it means “five”. Five is an important number in this game. It’s a team game. Each team consists of five players who play five rounds with five different themes each. We have four individual rounds and one team round. For each correct answer your team gets more points, for each wrong answer it loses them. So, we stress once more that each team member is contributing to the team’s victory.

While Faig and I were talking, players were constantly changing places at the stands in the mall. “These are knock-out games,” presenter and question master for the last hour, Vugar Mammadov, told me. Now he had handed over to Rufat Abdulla, one of the Khamsa TV stars. The games started at 12.00, and at 17.00 we will be having the semi-finals and final. The winners will get prizes from our sponsor – Bank Standard.

As time passed the crowd wasn’t getting any smaller. While at first only young men were bold enough to play, girls and middle-aged people started joining the queue of would-be contestants.

Vugar joined the Khamsa organisers a couple of years ago. He started as a fan of the game, then became a player and now is an important part of the production crew for the TV version of the game. 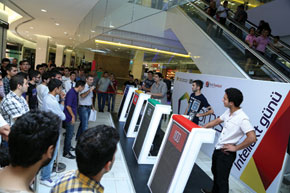 Audience and contestants listen carefully to the final question

After several successful national tournaments, we decided to bring Khamsa to TV, Faig continued. Since 2008 we have been on Public TV every Saturday, and our ratings are quite high. We are proud of being supported by our fans and spectators.

Following the success of his TV project, Faig decided to introduce the game to other countries. Khamsa was played during the What? Where? When? championships in Israel, Georgia, Russia and Latvia and gained fans beyond these countries too. Faig outlined exciting plans for the next few months: We are planning a World Championship in Russian at the end of this year in Baku. We also plan to introduce English language games and attempt to organise a business league, where companies can play against each other. Khamsa is a great tool for team-building.

Today’s event was part of a range of activities to mark Intelligence Day. The day was celebrated for the first time in 2012 and Faig plans to make it an annual event. This year tournaments were held in 64 towns and cities of Azerbaijan as well as the open Khamsa event in the mall, where anyone could have a try at the game.

The clock ticked round and it was time for the final. Four young men who had each won three games in the knock-out stages and then got through their semi-finals had their fingers poised over their buzzers. And a dramatic game it was – the leader and runner-up had broken away from the other contestants and it all went down to the final question. Would the runner-up risk losing points by trying to answer? If he answered the last question, he would get 500 points and overtake the current leader...

“I had to take the risk, because it was my last chance,” said Vusal Bayramov, a happy winner after the award ceremony. “ I wasn’t sure about the answer, but I tried to think logically and I made it.”

Vusal had come to the mall with his friends, and hadn’t been aware of the Intelligence Day event. When he saw the Khamsa stand, he decided to try his luck. “I played Khamsa once before, but our team was not very successful. I keep watching Khamsa on TV. It motivates me to learn more.”

Late at night when the stands are being dismantled and the game equipment packed away, Faig Huseynov reads comments about the photos uploaded onto the game’s Facebook page: Well done! Great day! Hope this isn’t the last time! We learnt a lot...

Definitely! agrees Faig. Yes, this was a very tiring day and it took a lot of effort to arrange, but if today we motivated at least one person to read, learn and study, then we have done a lot of good and our efforts have been rewarded.

The Rules of Khamsa

Four teams of five persons play. There are five rounds in the game. The first person to push the red buzzer has the right to answer the quizmaster’s question.

The first round is the Open Round. The quizmaster announces five topics and each team decides which player will take which topic. There are five questions ranging from easy to difficult for each topic; depending on the difficulty of the question, a player gets from 100 to 500 points for a correct answer, and loses the same number of points for a wrong answer.

The second round is the Semi-Open Round: players do hear the name of the topic but only just before the quizmaster starts reading the question; a correct answer wins from 200 to 1,000 points.

The third round is Secret: when players take the stand, they have no idea what the topic will be; the points range from 200 to 1,500.

The fourth round, known as the Individual Round, is for one player from each team; here players win from 400 to 2,000 points.

The final round in Khamsa can change everything: this is a team round in which the team has 60 seconds to answer one question and can stake points on that question. For example, if after the fourth round a team has 5,000 points, they can risk up to 5,000 on the final question. If the team bets 4,500 points on the question and gets the answer right, they will finish with 9,500 points; if they get the answer wrong, they will finish with 500 points.

Have a go at these Khamsa questions about Baku!

100. This Baku metro used to be known as Baki Soveti.
200. The 22nd article of the Constitution of the Azerbaijan Republic says ...
300. This football club from Baku became Azerbaijani champions in 2006 and 2009.
400. This institution is located at 23, Academician Zahid Khalilov Street.
500. Hitler’s plan to annex Baku was part of this wider plan approved on 23 July 1942.

About the author: Jamila Azizova is a freelance journalist, public health specialist and enthusiastic quiz player since 1993. She has several times been part of the Azerbaijan and South Caucasus championship winning teams in the game What? Where? When?