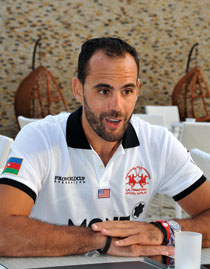 We interviewed Tito Gaudenzi, captain of the USA-Montblanc Polo Team, just a day before the start of the Arena Polo World Cup Azerbaijan. The mood was upbeat and optimistic. Tito didn’t know then that the Europe-Baltika team would claim the cup, though he wouldn’t leave empty-handed, as he was to receive the fair play award. Tito was a favourite with the fans in all his matches. “Tito, Tito!” echoed from the stands whenever he took the field.

Born in Switzerland, Tito calls himself a Swiss American as he has lived in Florida for many years. His father, Reto Gaudenzi, is a well-known polo promoter, who organised polo’s debut tournament in Baku. So, Tito must have grown up with a love of polo.

How long have you been playing polo?

Oh, since my childhood. My father taught me to ride at a very early age. He has been in polo his whole life. When I was born, he was already a big name polo player so there was no chance of me not following in my father’s footsteps. 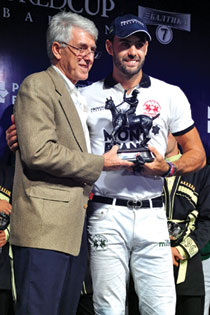 Did you ever want to follow a different path?

There was a time in my life when I actually decided not to play polo. I wanted to pursue other things as well. I have always been an athlete, so I pursued soccer. I played for the youth team of a big club in Germany and that was my passion. The good thing was that my father never forced polo on me. He didn’t say “you have to play polo because that’s what I do”. So when I got older, like 20, I found that I loved polo so much more. I was never forced to do it. And I loved it and couldn’t think of anything better in the world.

What does it take to be a professional polo player?

I think that if you play polo you should first of all believe in yourself. And especially as polo is a team sport you have to believe in your team-mates and work together and try as hard as you can.

Apart from the human factor, there is the horse in polo too.

Of course. Obviously, we try to get the best horses to make us better. We do the best we can to work together with the horses. The horses are not only our companions and partners on the field; they are our biggest love in this sport. It is the interaction between rider and horse that makes the game so unique. 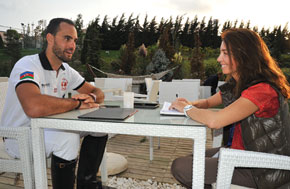 Tito talks to Jeyran (Visions) about his expectations

How do you yourself behave towards your horse?

It’s different because you have different relations to each horse. Everyone has individual things they do, but I think in general everyone has the same goal in terms of caring for the horses and loving them. If the horses are happy, it means we are happy as well. The difference between polo and other equestrian sports is that we have multiple horses. So we go to a game usually with six horses, sometimes even more; we don’t have just one horse. So you need to get on well with your horses to make the game a success.

What is the hardest thing in polo?

Polo is the oldest game in the world. Of course there are problems and like in other sports they are to do with the weather or the state of the ground, or the movement of the horses… so many factors come into it. And that’s why preparation is key. Every professional in this sport trains to do the best he can. But in polo we have to do even more because we are bound to our horses; we have to train even more. 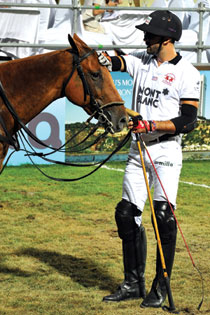 Tito shows his horse some appreciation

Have you managed to find out anything about chovgan?

Yes, I have! Actually I did some research before coming to Azerbaijan. You know the sport of chovgan goes back thousands of years. I believe the first records of it date to 500 BC and it might be older. It spread from Central Asia to India, and then came to Britain. It’s very interesting because polo and chovgan are not so different; polo is derived from chovgan. Both games have the same concept. I’ll be playing in a chovgan match in a couple of days. I’m going to play with two chovgan players and my polo partner against another team of two chovgan and two polo players as well. This will be a first in history, an historic event.

What are your expectations?

To win as always! I hope for a really interesting game and not to disappoint the polo and chovgan fans, because they have the same passions as us; we have the same goal, the same love for horses. So sharing this unique moment is something I will remember for the rest of my life.

And how do you find Baku, Azerbaijan?

You know, we play over the world. When the organisers were looking for players to come here, I was honoured to come as captain of the USA-Montblanc Team, so here I am. We’ve only been here for two days and I haven’t seen Baku’s sights yet. Yesterday we trained all day and I hope to take a walk in the city tonight. But I can already say that I like the people here in Azerbaijan and their amazing hospitality. It would be a pleasure to come back to Baku some day.