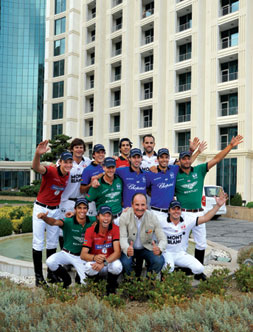 Polo organiser Reto Gaudenzi surrounded by the competing teams
Did you know that the spectacular sport of polo has roots in the east, which reach down to Azerbaijan? Few people are aware of the connection between polo and chovgan, a precursor of the game, which has been played in Azerbaijan for thousands of years. Now the players of both games have had the chance to see polo and chovgan in action and even to pit their wits against each other in an historic chovgan-polo match.

The world of polo has a new destination – Azerbaijan – which for the first time has hosted the Arena Polo World Cup. The newly constructed outdoor polo arena at the Elite Horse Club in Baku was home to the three-day tournament. Four professional teams from Argentina, the USA, UK and Europe battled it out from 6 to 8 September 2013. Sponsored by Azerbaijani dairy company Milla, the event was produced and organised by Swiss-based Polo GmbH and luxury international brands.

The day before the tournament the teams and sponsors were presented to the press at Baku’s Kempinski Hotel Badamdar. Each team was presented by its own sponsor: the Argentinean team was introduced by Chopard, who were also the Official Timekeeping and VIP Lounge sponsors; the UK team was presented by Bentley, the US team by Montblanc and Europe by Baltika-7.

Polo is considered the oldest team sport in the world. Legend has it that when Alexander the Great was about to invade Persia in 334 BC, Persian King Darius III sent him a polo mallet and ball. Either he was inviting the Macedonian to a game or suggesting that he stick to games and avoid war. Whatever the intention, Alexander is said to have replied, “I am the stick and the ball is the Earth,” before going on to conquer Persia.

Polo and its precursors have always been known as the sport of kings. This fast-paced game requires a skilful horse as well as rider, a requirement that has always made it a sport for the wealthy. Persian rulers are thought to have been hooked on playing polo as early as 600 BC, while the game was also played in Central Asia and China. 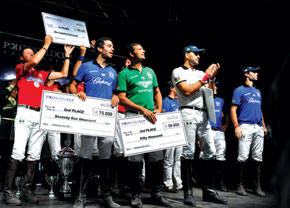 The teams display their substantial winnings
Long before polo made its way to the European continent, it was hugely popular across Asia. British officers stationed in India towards the end of the 19th century caught the local enthusiasm for the sport, leading them to found the world’s first polo club in Silchar in 1859. The Calcutta Polo Club was established three years later and last year celebrated its 150th anniversary, making it the oldest polo club in the world. Back in their homeland, the British wanted to carry on enjoying their new leisure pursuit. This led them to set up the Hurlingham Polo Club in 1876, the first place where the rules of polo were set down in writing. These rules are still applied in international matches the world over.

The British then took the sport to America, which helped to develop the handicap system that was adopted by the British and Indians in 1910. Today, polo is played in nearly 100 countries across the world. New clubs, tournaments and polo academies are springing up everywhere. Polo is played not only on horseback, but also with other animals such as elephants and camels, as well as on bikes and in canoes. It not just played on grass, but on snow and sand too.

Funnily enough, the polo shirt originally had nothing to do with polo. It was designed for tennis players by French tennis legend René Lacoste. As the shirt allowed for ease of movement while remaining smart, it was soon taken up by other sports such as polo.

The most immediate difference between arena polo, the version played in Baku, and field polo is the size of the pitch. A full polo field is 300 yards by 160 yards (275 by 146 metres), or almost 10 acres (four hectares) in size, while arena polo is played on a field that is 100 yards by 50 yards (91 x 45 m) and enclosed by walls or fences at least four feet high. This makes arena polo much more attractive for spectators as they can easily follow the action from the stands. Another difference is that an arena polo team has three players, rather than field polo’s four.

Both versions of polo have been described as “hockey on horseback”, as players ride horses and hit a ball with a long mallet, each team aiming to score more goals than the other.

The game of chovgan, one of the precursors of polo, has been popular in Azerbaijan and Central Asia for centuries. Medieval miniatures portray the game in progress and give a good idea of its rules. Two opposing teams contest a chovgan match, each aiming to score the most goals. A team has five or six players plus a back-up player. Regardless of the composition of the team there is no goalkeeper. The ball can be stopped while in movement by any part of the player's body, but strikes must be made only with the special mallet known as a chovgan. There is no big difference between chovgan and polo. The only thing is the number of players: chovgan has five to six players in a team whereas polo has three or four.

Equestrian sports were rare in Azerbaijan during the Soviet period, but after independence chovgan tournaments started up again. The first games were held in Sheki in December 2006. Since then the Chovgan Presidential Cup has been held every December. (For more on the history of chovgan, see Rafael Emin’s article Chovgan – Polo’s Eastern Ancestor on this website.) 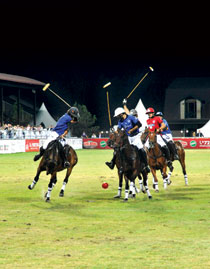 Now, under the motto “Bringing polo home”, World Polo has organised its first match in Baku. Manuchehr Ahadpur Kangah, president of the event’s main sponsor, the Milla dairy company, said that the chief aim of the Arena Polo World Cup in Azerbaijan is to establish polo as a sport in the country.

Our visions are really ambitious. We need polo players who can represent Azerbaijan on international playing fields and teams that are of national and international standard. We are also working towards improving the polo infrastructure so that we can host tournaments the whole year round. Given that we have a lot of sunny days in Azerbaijan, there is a lot of potential here. Polo also offers the perfect opportunity to promote our famous Karabakh horses, which are known for their stamina, toughness and sure-footedness and have already won numerous prizes and medals. It is high time we made these superb horses better known outside Azerbaijan.

Ahadpur Kangah, who is also vice-president of the Azerbaijan Equestrian Federation, said that Azerbaijan would apply to join the Federation of International Polo (FIP) at the beginning of December and an Azerbaijan national polo team would be established over the coming months.

This year we will create a national team, which will be trained not only in Argentina, but also here in Baku, by professional coaches. Take a look and you'll see that Azerbaijan has all the right conditions for polo. My goal is to make the Azerbaijani team number one in the world. We were very limited in the Soviet period, but now we are returning to our traditions, such as chovgan. Baku is ready to play a major role in the polo world. I’m sure that modern Baku with its love of adventure perfectly suits the dynamics of the game.

Chovgan met polo during the tournament when two mixed teams of chovgan and polo players played a friendly match. Karabakh horses took part in this game. Elchin Jamalli, a 17-year-old chovgan player from Azerbaijan, played particularly well riding a Karabakh horse. He told us that he recognises only Karabakh horses as they are very obedient. The Karabakh horse is a mountain breed, renowned for its stamina, good nature and speed. The horse was bred in the Karabakh region of Azerbaijan, which remains under Armenian control. Khandan Rajabli, director of the Azerbreeding Association who was an umpire for the polo-chovgan match, said that the Karabakh horses are famed for their endurance and ability to run long and difficult courses.

Rajabli said of the horses: No wonder they were so popular in chovgan games many years ago. They have perfect legs even after working on the hardest ground, very strong hoofs, quick recovery after carrying heavy burdens, the ability to easily run distances of several hundreds of kilometres, good condition even on a poor diet – this isn’t the complete list of the qualities of this unique breed. Ease of upkeep, strong health, cheerful, lively temperament and curiosity should also be added. They can win your heart at first sight. 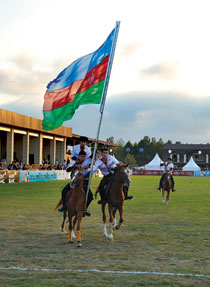 The prize fund of 250,000 euros for the Arena Polo World Cup Azerbaijan was the largest ever prize money in a polo event in Europe. It certainly added spice to the matches. The enthusiastic fans (more than 10,000 people over three days) gave lively support to the players, creating a pulsating atmosphere. The professionalism of all the teams was immediately obvious and helped to make the games competitive. So polo was seen at its best in Baku.

The tournament’s success was also down to polo organiser Reto Gaudenzi from Switzerland. Often described as a “polo visionary”, Mr Gaudenzi founded the Snow Polo World Cup on the frozen St Moritzsee lake and invented the modern-day version of beach polo in Miami. When Mr Gaudenzi and World Polo Gmbh turned their attention to Azerbaijan, they helped to make an already fine infrastructure even more impressive. High-definition lighting systems installed at the Elite Horse Club in Baku made matches possible at any time of day and also enabled them to be filmed for television. Through the European Broadcasting Union, more than 500 television stations broadcast the polo tournament.

The players were delighted to be part of the event, describing the conditions as perfect for the game. The crowd was thrilled as well, especially to witness the historic first ever match to involve both chovgan and polo players. This unforgettable show was directly followed by an even more memorable match, the final to decide the winner of the First Arena Polo World Cup Azerbaijan.

I’m so happy! I still can’t believe it…the game was hard but we managed to win, an out-of-breath Thomas Winter, captain of the Europe-Baltika team, said after their victory in the final. Europe beat favourites Argentina-Chopard in a hard-fought match to claim the 100,000 euro prize money. The runners-up, meanwhile, received a 75,000-euro prize pot. UK-Bentley won the third-place play-off to take a 50,000 euro prize while 25,000 went to fourth-placed USA-Montblanc.

Both the Argentinean and European teams made their contributions to an amazing final. By the end of the second period or chukker, the score was equal at 4:4. At the beginning of the final chukker the score was still equal, now 5:5. The game went to a sudden death period in which the winner would be the first team to score. It was Europe captain Thomas Winter who struck the golden goal to bring his side victory. His team-mate Raul Laplacette won the player of the tournament title, while Tito Gaudenzi of the USA won the fair-play award. Even polo pony Mare Samba from the famous Allegria Polo Farm Lobos in Buenos Aires wasn’t left out. As the winner of the Best Pony prize, Mare Samba received a large bag of carrots.

A magnificent firework display rounded off the exciting tournament.

Richard Caleel, president of the International Federation of Polo, was also delighted with the game’s Baku debut. I am deeply impressed by the high level of the tournament. Equestrianism is part of the history of Azerbaijan, so it is absolutely natural. And the sport is again gaining popularity among the local population. I've never seen such a clear positive as this.