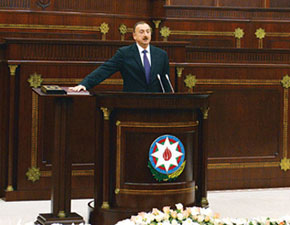 His hand on the Constitution of the Azerbaijan Republic, President Ilham Aliyev swears the oath of office
President Ilham Aliyev was sworn in to a new term in office in a ceremony in the Azerbaijani parliament on 19 October. In the 9 October elections, the incumbent president received 84.54 per cent or over three million votes, according to the final results from the Central Election Commission. His closest rival, Jamil Hasanli of the opposition National Council, received 5.53 per cent, or just over 200,000 votes, the commission said. Turnout was put at 71.63 per cent of the electorate of over five million. Visions looks at the president’s hectic first five weeks in office and what may be ahead in the next five years.

Unlike the president’s previous inauguration ceremonies, this one was held in the National Assembly or Milli Majlis rather than the Heydar Aliyev Palace. Diplomats and other foreign guests were not invited to the ceremony, which was described by the president’s press secretary Azer Qasimov as “in keeping” with the leader’s preference for modest events. Before a packed assembly, the president took two oaths. With his hand upon the Constitution, he declared, Exercising the powers of the president of the Republic of Azerbaijan, I swear to observe the Constitution of the Republic of Azerbaijan, protect the independence and territorial integrity of the state and serve the people! With his hand upon the Holy Koran, he swore to be faithful to the national and spiritual values and traditions created by the Azerbaijani people over the course of centuries and to always cherish them. On bended knee the president kissed the Azerbaijani flag.

In an extensive speech, Ilham Aliyev reviewed his previous time in office and looked to the future. He described as the “top priority” the restoration of territorial integrity – the return to Azerbaijan of Nagorno-Karabakh and the surrounding seven districts, which are all under Armenian control. On economic policy, the president said that continuing diversification away from the oil and gas industry remains key.

Visits to Martyrs’ Avenue, his father’s grave in the Avenue of Honour and National Flag Square completed the official events on inauguration day.

The president lost no time in getting down to business, announcing his new government three days later, on 22 October. One of the major changes was the replacement of long-serving Defence Minister Safar Abiyev with Zakir Hasanov, who until the reshuffle was commander of the Internal Troops. (The Internal Troops are a military force subordinate to the Interior Ministry, unlike the army, which is subordinate to the Defence Ministry.) The replacement has been widely welcomed, with many blaming Safar Abiyev for poor discipline and non-combat deaths in the Azerbaijani army.

In addition to Ismat Abbasov, a new deputy prime minister is Ali Ahmadov, executive secretary of the New Azerbaijan Party, who as a result of his appointment had to step down from his seat as a member of the Milli Majlis. Artur Rasizade remains prime minister of Azerbaijan. 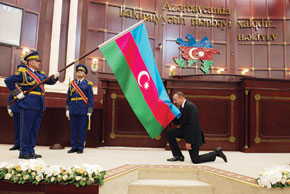 President Aliyev turned his attention to the most important of the economic development projects under way in Azerbaijan. On 29 October, he signed a decree to create a state commission to see through implementation of the full development of the Shah Deniz gas condensate field, expansion of the South Caucasus gas pipeline and the completion of the Trans-Anadolu (TANAP) and Trans-Adriatic gas pipelines (TAP), which will pump gas from Azerbaijan’s Shah Deniz field to Europe.

These projects require huge investments and urgent organisational work, the decree said. It stated that the aim of the commission is to protect Azerbaijan’s interests in these projects and to provide good conditions for the project partners.

President Ilham Aliyev’s first trip abroad after his re-election was to the Belarusian capital Minsk to attend the Council of CIS Heads of State on 25 October. In his speech to the council the president noted the ties that bind the former Soviet countries: Our people are united by history, our shared heroic past, the joint struggle against fascism. Today, we are united by economic and political interests and cooperation within the CIS is one of the main priorities in Azerbaijan’s foreign policy.

Following tradition, President Aliyev made his first official visit of his new term to Turkey from 12 to 14 November. He held talks with President Abdullah Gul, Prime Minister Recep Tayyip Erdogan and Foreign Minister Ahmet Davutoglu among others. President Gul presented his Azerbaijani counterpart with the State Order of Turkey, while in turn Ilham Aliyev presented him with Azerbaijan’s highest award, the Order of Heydar Aliyev.

The two presidents visited Turkish Aerospace Industries to watch the Hurkush basic trainer aircraft and the T129 attack helicopter in flight. They also took the opportunity to try out the cockpit of a Hurkush plane.

Trade and economic cooperation were high on the agenda with several agreements and memorandums of understanding signed on trade, transport, technology and science. President Aliyev and Prime Minister Erdogan attended the third session of the Azerbaijan-Turkey High-Level Cooperation Council.

We are taking steps in the area of energy which has strategic importance, the Turkish prime minister told a joint press conference with the Azerbaijani leader. Turkey and Azerbaijan will work to boost bilateral trade from the current $4.2 billion per annum to $15 billion by 2020, Erdogan said.

Construction of the Trans-Anatolia Pipeline (TANAP) to carry Shah Deniz gas will start in early 2014, the PM said. The supply of Azerbaijani gas to the Balkans was also discussed.

As the Baku-Tbilisi-Kars railway approaches completion, discussion also centred on a railway project to link Igdir and Nakhchivan, Erdogan continued. One specific achievement in the talks from Turkey’s point of view was agreement to reduce the cost of work permits for Turkish citizens wanting to work in Azerbaijan from $1,270 to $50.

Erdogan expressed Turkey’s continuing support for Azerbaijan in its attempts to find a just and peaceful resolution to the conflict with Armenia over Nagorno-Karabakh.

On 18 November, Ilham Aliyev paid an official visit to Ukraine, where he held talks with President Viktor Yanukovych and Prime Minister Mykola Azarov among others. Speaking to reporters, the presidents said their talks had focused on energy supplies to Ukraine from the Caspian basin and their onward transit. Our countries have all the conditions to unite efforts on transportation of hydrocarbons to Europe, the Ukrainian leader said.

President Aliyev added that Baku is interested in further cooperation in the military-technical sphere, as Kiev is one of the main suppliers of military and dual-use items to Azerbaijan.

The two leaders also exchanged awards. Viktor Yanukovych presented Ilham Aliyev with the Order of Liberty, and the Azerbaijani leader presented his host with the country’s highest state award, the Order of Heydar Aliyev. 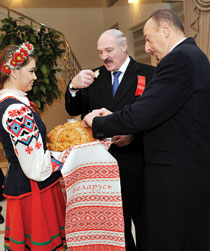 From Kiev, President Aliyev travelled to Austria for a working visit. During talks with Austrian President Heinz Fischer, the two leaders noted the growth in bilateral relations and the potential to boost economic ties.

The main purpose of the president’s trip to Vienna, however, was to hold talks on resolving the Karabakh conflict with Armenian President Serzh Sargsyan. On 19 November, in their first meeting in nearly two years, the two leaders had one-to-one talks followed by working meetings with the foreign ministers and co-chairs of the OSCE Minsk Group, the international body mediating a solution to the conflict.

The presidents discussed a broad range of issues related to the settlement of the Nagorno-Karabakh conflict. The presidents agreed to advance negotiations toward a peaceful settlement, the Minsk Group co-chairs from France, Russia and the USA said in a press release after the meeting. They instructed their foreign ministers to continue to cooperate with the co-chairs to build on the work to date with the aim of intensifying the peace process. They agreed to meet again in the months ahead.

The meeting between the two presidents was a good start, the US co-chair of the OSCE Minsk Group, James Warlick, told Azerbaijani news agency Trend. I was pleased with the outcome of the meeting, and look forward to developing next steps when we see the foreign ministers in Kiev in early December.

Commenting on the meeting, Armenian President Serzh Sargsyan described it as “OK”. OK in the sense that this meeting actually means, in all likelihood, a new round of negotiations and a new beginning, News.am reported the president as saying. He summed up the heart of the problem: We want the same thing. I personally want the problem to be resolved as quickly as possible. However, the terms on which the president of Azerbaijan wants to solve the problem and on which I do – that is the issue.

The main sticking point in the talks has long been the status of Nagorno-Karabakh itself.

Back in Baku, President Aliyev welcomed his Belarusian counterpart Alexander Lukashenko on an official visit on 21 November. Following talks, the Belarusian leader stressed the importance of economic cooperation: We are definitely going to develop our cooperation. I really want us to be able to say in a short period of time that we have doubled our turnover and we have doubled the number of joint projects and areas of cooperation. He said that the current trade figures of $300 million nowhere near meet the potential.

The two presidents also attended the opening of a new Belarusian embassy building in the Azerbaijani capital.

After a busy first five weeks in office, what awaits the president in the next five years? He will continue to balance Azerbaijan’s foreign relations between its big neighbours to the north, Russia, to the south, Iran, and also with Turkey and Europe. Azerbaijan has already said that it will not sign an association agreement with the EU at the summit in Vilnius at the end of November. Baku supports the conclusion of a bilateral agreement with Brussels, a deputy head of the Presidential Administration, Novruz Mammadov, told Azerbaijani TV station ANS. He denied that Baku did not want to sign the association agreement because of pressure from Moscow.

As mentioned above, the development of Stage 2 of the Shah Deniz gas field and the infrastructure to export Shah Deniz gas to Europe will be the major economic project of the president’s third term in office. Shah Deniz 2 gas is expected to come on-stream in late 2018 or early 2019 and will play an important part in plugging the income gap at a time when oil exports are expected to fall.

The new railway linking Baku with the Georgian capital Tbilisi and the Turkish city of Kars is due to be completed in 2014. It is expected to triple trade links between the three countries.

An infrastructure project to be completed this year is the new airport terminal in Baku. The capital’s transport infrastructure is being expanded and upgraded with new lines and stations under construction for the Baku Metro, which will be opened over the coming five years.

The reclamation of former industrial areas is an important part of the development of Baku. As industrial facilities are moved out of the city centre, the land is being cleaned and used for residential and leisure developments. One such development is the White City project in an area that used to be known as the Black City, the former heart of the oil industry. When Baku’s seafront promenade is extended through the White City, it will be the longest promenade in the world.

Major sports facilities, including a 65,000-seater Olympic Stadium on reclaimed land, are under construction ahead of the inaugural European Games, which will be held in 2015 in Baku.

Visions of Azerbaijan aims to keep readers up-to-date with all these and more projects over the coming years.