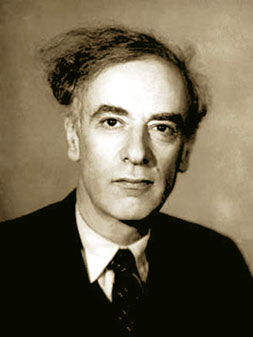 The year 2008 marked the centenary of the birth of physicist Lev Landau, a Nobel Prize laureate from Azerbaijan.

Lev Landau was born into a Jewish family in Baku on 22 January 1908. His father worked as an engineer in the oil fields and for a time the family lived in Balakhani, a village just outside Baku. When Lev reached school age, the family moved to the centre of the city, to a house at the intersection of Nizami and Samad Vurghun streets. A plaque on the Landaus´ former home says that prominent 20th century physicist and academic Lev Landau lived in the building until 1924. A street in the city has also been named after Baku´s famous son.

Throughout his childhood Lev Landau was ahead of other children his age and showed great interest in science. He was 12 when he received his school certificate. He was a thoughtful child, able to solve the most difficult mathematical problems in a matter of moments and had a good memory. Lev was familiar with advanced maths as early as secondary school age and said himself that he did not remember a time when he was ´unable to calculate integrals and differentials´.

Lev Landau first went to Baku Economic College, as he was too young for university. At the age of 14 he entered Azerbaijan State University. He was admitted to two faculties (physics-mathematics and chemistry) in the same year, 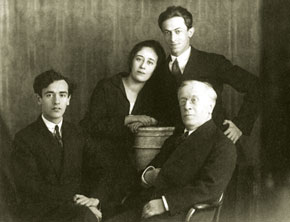 At that time Leningrad was the centre for the study of physics, so two years later, in 1924 at the age of 16, Lev Landau went to complete his studies in Leningrad. He was 19 when he began his postgraduate work.


Lev Landau´s scientific articles were regularly published in the press. He was very interested in electromagnetic theory and his paper on quantum electrodynamics attracted the attention of the famous physicists of the day. Lev Landau stood out among the older physicists and attracted attention abroad as well as at home. He was a frequent speaker at academic conferences and his command of languages meant he could take part in foreign conferences too.

In 1929 Landau got the chance to go to Europe. He participated in scientific symposiums in Germany, France, Switzerland, the UK, the Netherlands, Denmark and elsewhere in 1929-31. Whenever Lev Landau spoke at international seminars and met worldrenowned scholars, he would get into heated scientific debates.

One interesting episode in Lev Landau´s life was his meeting with Albert Einstein at Berlin University in 1929. At the time, 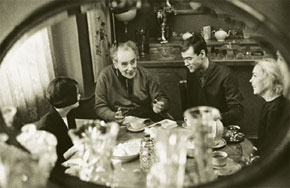 Lev Landau, celebrating his 60th birthday with his family, 1968
Landau was 21 and Einstein was 50. Although the young physicist´s ideas attracted Einstein´s attention, unfortunately their scientific argument was never finished. The Stalinist authorities did not let them meet again.

After short stays in Gottingen and Leipzig, Landau headed for Copenhagen where he worked at Niels Bohr´s Institute for Theoretical Physics. Landau always thought of himself as a student of Bohr and said that Bohr played a key role in his development as a physicist.

After Copenhagen, Landau went to Cambridge and Zurich, then returned to the Soviet Union. Although he received invitations from the world´s top scientific centres, Lev Landau decided to head the Theoretical Department at the Ukrainian Institute of Physics in Kharkiv.

In 1943, Landau received the academic title of doctor of sciences and professor without defending any dissertation. His scientific discoveries alone were enough for him to receive this honour. His research into all areas of theoretical physics brought him fame at a young age.

The repression that enveloped the

Medals issued in honour of Landau´s 100th anniversary, Moscow, 2008
whole country in 1937 did not bypass the great scientist. Internationally renowned physicist Pyotr Kapitsa had invited Lev Landau to Moscow to work at the Institute for Problems in Physics in 1937. However, in 1938 Landau was arrested. Although the slander against him was not proven, he had to spend one year in jail. According to the official indictment, he was charged with spying for Germany.

Pyotr Kapitsa had great influence at that time. The famous academic went to the Kremlin to demand Landau´s release. After Kapitsa wrote a letter to Stalin, Lev Landau was freed. Apparently, he was let out of jail in order not to attract international attention.

The scientific institute where Lev Landau worked was moved to Kazan during World War II. Landau, who had already been elected a full member of the USSR Academy of Sciences, was given various awards: the Order of Lenin, the second-degree State Award, the first-degree State Award and, finally, the title of Hero of Socialist 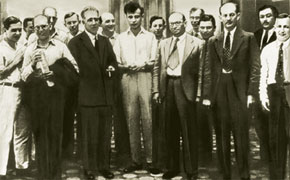 Lev Landau with the participants of the Conference on Theoretical Physics, Kharkov, Ukraine, 1934
Labour.

Apart from his discoveries in theoretical physics, Landau was the principal founder of the great tradition of theoretical physics in the Soviet Union centered at Kharkiv, now in Ukraine, which is sometimes referred to as the ´Landau School´. He was the head of the Theoretical Department at the Institute for Physical Problems in Kharkiv from 1932 until 1937, when he became head of the Theoretical Department of the Institute for Physical Problems of the USSR Academy of Sciences in Moscow. Simultaneously Lev Landau taught as a professor of theoretical physics in the Kharkiv and Moscow state universities until 1962 when he suffered injuries in a car accident from which he was never able fully to recover. His students included the future leading lights of Soviet physics - Lev Pitayevskiy, Aleksey Abrikosov, Arkadiy Levanyuk, Yevgeniy Lifshitz, 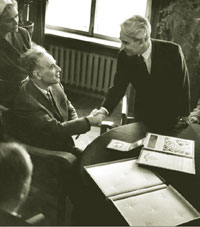 Landau developed a comprehensive exam called the Theoretical Minimum which students were expected to pass before admission to the school. The exam covered all aspects of theoretical physics, and between 1943 and 1961 only 43 candidates passed. His students became proper physicists, rather than narrow specialists.

It was also in Kharkiv that, with his friend and former student, Yevgeniy Lifshitz, he began writing the Course of Theoretical Physics, a multi-volume work that spans the whole of the subject and is still widely used as a graduate-level physics text.

Landau had many students but none of them managed to surpass their teacher.

Lev Landau´s scientific discoveries include the density matrix method in quantum mechanics; the quantum mechanical theory of diamagnetism; second order phase transitions; the Ginzburg-Landau theory of superconductivity; the explanation of Landau damping in plasma physics; the Landau pole in quantum electrodynamics; and the two-component neutrino theory.

Landau received the Nobel Prize for physics in 1962 ´for his pioneering theories for condensed matter, especially liquid helium´, according to the Nobel Prize committee citation. ´The importance of Landau´s 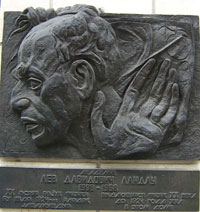 Memorial on the wall of the building where Lev Landau lived till 1924 in Baku
investigations are apparent when one considers that an important goal of physics research is to explain the properties of liquids as completely as it has been possible to explain the properties of crystals and of rarefied gases,´ Prof. Waller of the Swedish Academy of Sciences said in his presentation speech at the Nobel Prize ceremony. ´In their efforts to attain this goal the scientists have in general met with insurmountable difficulties. An essential exception is Landau´s theories of liquid helium which therefore are an achievement of great and profound importance. Besides his investigations on condensed matter, i.e. matter in the solid and liquid state for which he is now awarded the Nobel Prize, Landau has also made contributions of the utmost importance to other parts of physics, in particular to the theories of quantized fields and of elementary particles. He has by his original ideas and masterly investigations exercised farreaching influence on the evolution of the atomic science of our time.´

Ill health following his car accident prevented Landau from travelling to Stockholm to receive his Nobel Prize in person.

Landau kept a list of physicists whom he ranked on a logarithmic scale of productivity ranging from 0 to 5. Isaac Newton received the highest ranking, a 0, while Albert Einstein was given a 0.5. The rank of 1 was awarded to Niels Bohr, Werner Heisenberg, Paul Dirac and Erwin Schrodinger, the founding fathers of Young Landau with his European colleagues
quantum mechanics. Landau ranked himself as a 2.5 but later promoted himself to a 2. David Mermin, emeritus professor of physics at Cornell University, referred to the scale, and ranked himself in fourth position in his paper My Life with Landau: Homage of a 4.5 to a 2. In spite of his low self-regard, Lev Landau is widely recognized as one of the greatest physicists of the 20th century.

Lev Landau was a full member of the academies of science of various countries, including Denmark, the Netherlands and the USA and of the Royal Society in Britain.

Landau was captivated by science in his childhood. He promised himself that he would never smoke, drink or get married.

However, he met Konkordiya Drobantseva, a chemistry graduate. Konkordiya swore that she would not be jealous of other women and they lived in a civil marriage from 1934. Lev believed that lies and cheating did the greatest damage to marriage so the couple signed a pact ´of non-aggression against family life´. Daun, as he was known 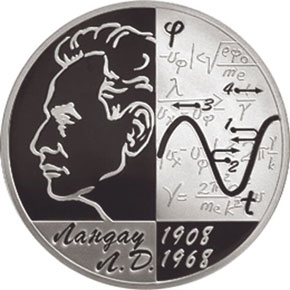 Memorial coin of Russian Central Bank in honour of Landau´s 100th anniversary
to close friends and family, believed that the ´contract´ gave both sides relative freedom in an open marriage.

Landau and Dobrantseva concluded their official marriage after their son Igor Lvovich Landau was born in 1946. Igor Landau graduated from the physics department at Moscow State University. He now works in Switzerland as an experimental physicist in the field of lowtemperature physics.

On 7 January 1962, Landau had a serious car accident. The scientist was badly injured and spent three months in a coma. He never recovered fully and was unable to return to his previous work. On 1 April 1968 the great physicist passed away. He is buried at the Novodevichiy Cemetery in Moscow.

Numerous scientific papers have been written about Lev Landau´s scientific work, his many discoveries, and phenomenal personality. Landau´s life and work feature in secondary school textbooks.
His injuries prevented Lev Landau from coming back to his native Baku to revisit childhood haunts. Baku, however, has not forgotten Lev Landau.