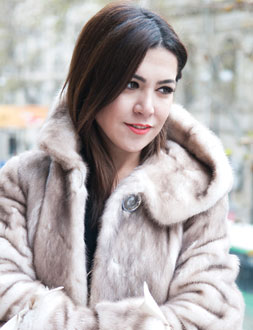 Our meeting with Mesme Aslan qizi was on a late summer evening in Buzovna on the Absheron Peninsula, as a warm breeze shuffled soft Caspian waves onshore. The idea to interview had arisen while watching this engaging actress play Ophelia; the water's edge seemed an appropriate place to be.

The sea has inspired so many to compose words and music that it was even more apt to discover that poetry, rather than the stage, had been the focus of her early ambitions. She had dreamed of being a poetry reader and had entered and won many competitions as a schoolgirl, including the prestigious Fuzuli competition.

Reality impinged, however, when university loomed and hard choices had to be made. The formidable figure of teacher and People’s Artist Shafiga Mammadova recognised the potential in the student applicant before her and insisted that it not be allowed to trickle away.

If you don't intend to be an actress, I won't accept your application.

This is how Mesme came to enrol in the Faculty of Dramatic Theatre and Film Acting at the University of Culture and Art.

Luckily for her, the course was headed by Azer Pasha Nematov, one of the country's most imaginative and respected directors. The working relationship has continued to this day at the National Drama Theatre and Mesme remains grateful to him and to Hasan Agha Turabov for the trust they showed in her and for leading her to a life on the stage. She still recalls being part of a presentation at the Republic (now Heydar Aliyev) Palace on Martyrs' Day, after which Hasan Agha told her mother, That girl will be an actress.

So why does she act?

I like people so much. When I am on stage I can transfer my love to the audience.

Has she ever played a "bad" character?

No, but I played a Turkish dancer in Old House and that was a little embarrassing. I would like to play a "bad" role, to see if I could do it.

Mesme's answer to our next question gave some indication of how seriously theatre can be taken in Azerbaijan.

How would she convey her love for people as a "bad" character? 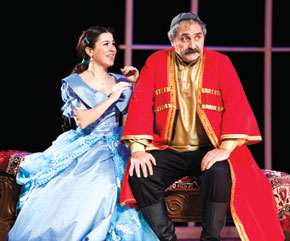 With Kazim Abdullayev in Khanuma

It would be difficult. I remember that an actor who played that kind of role in Seven Sons was walking through Icheri Sheher [Baku’s old Inner City – ed.] when someone spat in his face!

As for directors, her thoughts naturally turned to Azer Pasha Nematov:

He is a good director because, first, he is a good person. I like his working style because unlike some other directors, he works with freedom and reason. He doesn't simply tell you "Go there, stand here... ", he gives you freedom, asks questions like "Why don’t you come onstage laughing?".... He doesn’t need extravagant stage sets, he prefers simple design. He is easy to get on with, although he doesn’t like actors who are big-headed, and he is always in control.

Ophelia in Shakespeare's Hamlet is a testing role and we wondered how she had prepared for it.

Only Azer Pasha Nematov believed in me for this role. I didn't watch any other production or film of the play, I just read it. For our production each character had associated qualities; Ophelia was delicate, fragile.

After playing with Fuad Poladov [as Hamlet – ed.] it was difficult to play with other actors. Yes, there is a big age difference, but he has a rare dynamic; the positive energy that radiates from him makes it impossible not to love him as an actor. From the very beginning there was complete belief in the production.

Hamlet was also taken to Turkey. She particularly remembers a full house in Trabzon, with people spreading newspapers to sit on the floor, and the rousing reception they gave the performance.

Her partnership with Fuad Poladov, one of the country’s leading film and stage actors, continued in You Are Always with Me by Ilyas Efendiyev, the most popular stage dramatist here in the 20th century. The play is a serious adventure with a light touch, of love across the generations; Mesme as Nargila brought to engaging life her character’s progress from tomboyish ingénue towards sophistication and romance. 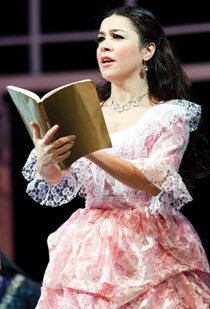 As Keto in Khanuma by Avksenty Tsagareli
We used ambition to describe Mesme's early wishes, but perhaps we shouldn't have. She is an Honoured Actress, has twice been Best Actress of the Year and was awarded the Golden Dervish in 2003 for her Ophelia and the Humay Prize in 2012 for her performance in You Are Always With Me, but:

I have never been ambitious. Yes, I dream of roles I'd like to play, but I've never struggled after titles. You cannot trust ambition; I don't want to expect and then later regret – this is not a faithful profession!

The vibrant and characterful performances we have witnessed at the National Drama Theatre belie a modesty and realism in her assessment of future possibilities. She would like to play Jeanne D'Arc; why?

Why not? She's strong, a patriot – and not too beautiful.

But in film your face has to fit.

What kind of film?

The theme of patriotism is hardly surprising. Like many others, Mesme's family carries the deep scars of her country's turbulent struggle for freedom and independence. Her father, Aslan Aghaverdiyev, was just 37 years old when he fell on 20 January 1990, a victim of the troops and tanks sent in by Mikhail Gorbachev to crush incipient agitation. Those events marked the beginnings of the end for Soviet rule, but at the cost of human lives.

Her father is remembered now in Shahidlar Khiyabani (Martyrs' Avenue), but also, more importantly, in Mesme's memory as a kind, caring family man, forever with a smile on his face. She remembers the trips he took her on to the other districts of Azerbaijan. The memories are particularly sharp every 20 January, when the nation comes together in commemoration. Her parents going to meetings in Azadliq (Freedom) Square; the explosions heard on the night of 19-20 January; television going off air; her father leaving, saying, Something's going to happen. Joining the unarmed protests he was shot near what is now the Hyatt Regency.

Surgeons operated by lamplight, but the bullets had also been "doctored" and he succumbed after a two-day struggle for life.

Of course, the loss was devastating for the family.

Who wants to be left without their father? I had no brother, the family was left without a man.... 31 December (New Year) was always his favourite holiday; we still lay an extra place for him.

Perhaps it made me stronger, as it taught me how to struggle against life's problems. On 20 January we took a step towards independence and I am proud of my mother and father for that. If it came to it, I would fight for Karabakh, for my native land. 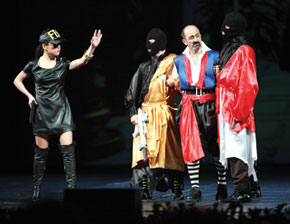 As Mesme takes her memories and talent into the future, she has both hopes and fears. She does not share the pessimism of those who see an old guard of famous actors passing into the wings without replacement.

There are different demands on today's actors and there are some talented young ones. There are many musicals now, more skills are required and we need good dance and vocal teachers.

She is more concerned that a new generation of directors emerges to work with these young actors. She has hopes of some, but after Turabov and Nematov it has been a problem to find directors who really understand theatre and actors. As for writers, she detects a disturbing trend for some writers nowadays to go for the sensational:

A play should touch your inner world…

At the suggestion that she could try her hand at writing or improvising plays herself, she harks back to last year’s production of Shakespeare’s Twelfth Night, which began with a group of actors from different theatres assembled by Azer Pasha Nematov. They rehearsed and gave a free performance at the Actors’ House, with Mesme playing three roles. It was then taken up by the National Drama Theatre and was also performed in Moldova. It was a good experience, she says, but difficult, because actors need to live and cannot afford to give up the television and commercial work they need to subsidise their commitment to theatre.

The show must go on, however, and as the theatres end their summer break, Mesme Aslan qizi looks forward to attracting a new generation to the limelight.