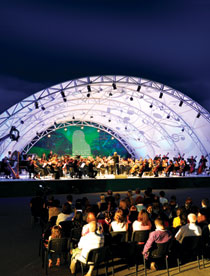 This summer saw the fifth international music festival in the town of Qabala in north-west Azerbaijan. The festival’s artistic directors, Farhad Badalbeyli and Dmitry Yablonsky, assembled the now customary rich mix of established stars and promising young talent, both Azerbaijani and international.

While the festival’s location in the wooded foothills of the Caucasus is one of its distinctive features, another is the free entry to concerts for local people and visitors alike. Cellist and artistic director Dmitry Yablonsky summed up the Qabala ethos: The festival introduces music lovers who gather here to the best classical pieces, and also introduces Azerbaijani culture to the visiting musicians. The enthusiastic audiences and stunning location combine to give the festival a unique atmosphere.

Organized by the Heydar Aliyev Foundation, with the support of the Azerbaijani Ministry of Culture and Tourism, the two-week festival featured numerous top-class soloists, the Youth Chamber Orchestra of the Uzeyir Hajibeyov Music Academy, three symphony orchestras – the Jerusalem Symphony Orchestra, the New Russia Orchestra and the Uzeyir Hajibeyov Azerbaijan State Symphony Orchestra, a Cuban jazz band and Azerbaijani mugham. 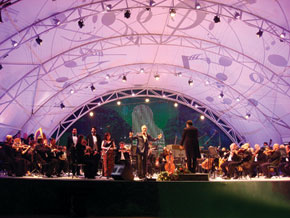 Azerbaijan’s ambassador to Russia, Polad Bulbuloglu, bursts into song
The programme was equally diverse, ranging from Verdi to Shostakovich, Beethoven to Poulenc, taking in jazz, mugham and contemporary pieces by Azerbaijani composers.

The weather intervened on 30 July, when thunderstorms forced a change in venue from the outdoor stage to Qabala’s well-appointed cultural centre. It was soon business as usual, though, as the next day the large audience could savour the special quality of mugham music played in the mountains.

Highlights for this festival-goer included Olga Martinova and Jean-Bernard Pommier’s Beethoven violin sonata (Opus 30), and the verve with which doyens of the Baku music scene, Farhad Badalbeyli and Murad Adigozelzade, played a Rachmaninov suite for two pianos. 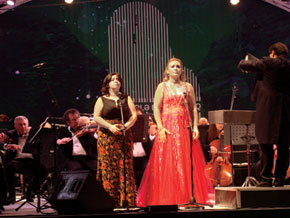 Farida Mammadova and Burchin Savigne sing Two Women’s Prayer/ Ave Maria by Farhad Badalbeyli
The audience was in for a surprise at the end of the concert when Polad Bulbul oghlu, son of the great Azerbaijani singer Bulbul, in whose honour the vocal competition is held, took to the stage. Since becoming Azerbaijan’s ambassador to Russia, the former singer and culture minister said he had had little time for music. To enthusiastic applause Polad Bulbul oghlu sang folk songs Gel ey seher, Ay Dilber and Khumar oldum and an impromptu Azerbaijan, sometimes losing the orchestra along the way. 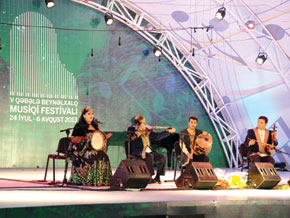 Ayten Maharramova sings mugham, with Elchin Hashimov, Kamran Kerimov and Elnur Ahmadov
One of the more intriguing evenings had two concerts entitled Fathers and Sons, though Mothers and Daughters or Fathers and Daughters might have been more accurate. Yuri Bashmet conducted as his daughter Ksenia Bashmet played Ravel. Mother and daughter Nina Kogan and Viktoria Korchinskaya-Kogan played a Poulenc sonata for two pianos, while Nina Kogan played a Debussy sonata with her son, violinist Daniel Milkis. Musical dynasties or families are a well-known phenomenon and indeed the festival’s two artistic directors are part of dynasties of their own. Farhad Badalbeyli is the son of theatre director Shamsi Badalbeyli, nephew of composer Afrasiyab Badalbeyli and first cousin twice-removed of composer Uzeyir Hajibeyov. Conductor and cellist Dmitriy Yablonsky, meanwhile, is the son of pianist Oxana Yablonskaya, who herself gave two memorable concerts at the festival.

The Qabala blend of fine music, fresh mountain air and friendly atmosphere has taken the festival to its fifth anniversary. May those distinctive features help the festival to flourish for another five, 10 or 50 years!