Celebrating the Silk Way in Sheki 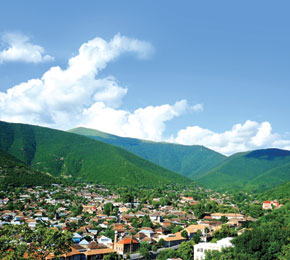 We arrived in Sheki, an historic town in north-west Azerbaijan, in late afternoon, tired after the long journey from Baku. The Silk Way International Music Festival was to start that evening, 28 June. We decided to take a nap in our hotel, located in the heart of beautiful Sheki, before the event began. Our nap was not to last too long, however.

The sound of indie rock burst into the life of the ancient town, including our hotel. Music reverberated throughout Sheki. US rock band Filligar, especially invited to the Silk Way Festival, banished any thoughts of sleep. For a while we felt that we were in some urban metropolis. Then the evening call to prayer, or azan, wafted from the nearest mosque and brought us back to Sheki, just as Azerbaijani rock music – Khezerin sahilinde (On the Caspian Shore) – resonated from the festival stage. A nice combination!

Walking down the street

Sheki has mosques in almost every part of the town, which is surrounded on three sides by green forested mountains. The streets of the distinctive town evoke the atmosphere of the khan's times when Sheki developed as a centre of trade, culture and art on one of the branches of the Silk Road. One of the main streets is named after Azerbaijani writer and educator Mirza Fatali Akhundov, who was born in the town, then called Nukha, in 1812. Sheki retains several of its old caravanserais, inns where merchants and their camel trains would stay overnight. The caravanserais were also meeting points for local and travelling merchants. Now, one of the best preserved of the caravanserais is an atmospheric hotel with a pleasant restaurant where you can imagine yourself back in the times of the caravans. A little further up this street is the upper quarter, in what was once the Sheki fortress. Inside is the Palace of the Sheki Khans which is open to the public as a museum. One of the distinctive features of the palace is its shebeke – wooden latticework windows filled with coloured glass. 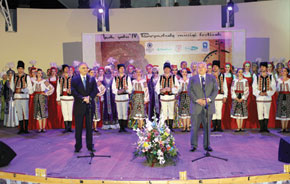 You probably won’t find so many clay pots in any Azerbaijani town as in Sheki. In every shop along the main street you can see shelves of clay pots, all with different purposes. There is a simple explanation. Sheki people traditionally cook in clay pots. Their favourite dish is piti, a stew that is cooked only in the clay pot known as a dopu. This is the town’s signature dish, cherished by the people of Sheki and popular across the whole of Azerbaijan. (Read more about piti in another article on this website.) Pots are considered healthy vessels in which to cook and store food. They are made by local craftsmen, who are another typical feature of Sheki. Artisans pass their craft from generation to generation, be they potters, cooks of Sheki khalva or makers of shebeke, which we will talk about in more detail in our next issue.

The Sheki accent and slang are another signature of the town. Any Azerbaijani can easily identify local people’s speech, which sounds both sweet and distinctive from other regions. Djozovu yeyim is a favourite phrase. It doesn’t have a direct translation, but literally means “I eat your eye”. Don’t think it’s a sign of cannibalism! Sheki people use this original phrase to show their respect. It’s no wonder there are plenty of jokes and anecdotes about them. They speak in a sing-song fashion, said David, an expat who often visits Sheki. He lives in Baku but almost every weekend likes to visit Sheki to relax and enjoy the scenery. This time he was visiting to attend the Silk Way Festival. 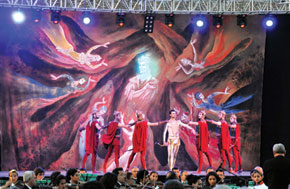 A scene from Seven Beauties
Welcome to Silk Way

The festival’s name recognizes Sheki’s place on the Silk Way, the trade routes linking China with Europe. This year’s was the fourth Silk Way Festival. From 28 June to 4 July, the international festival featured bands, dance and theatre troupes and folk traditions from all over the world. The festival is organized by the Azerbaijan Union of Composers and Sheki Executive Authorities with support from the Ministry of Culture and Tourism. Many visitors came to the festival from Baku and abroad.

The festival gives us the chance to present to the world Sheki’s rich culture and art, its hospitality and originality. For centuries this beautiful town, which is located along the route of the ancient Silk Road, was an important centre of art and commerce. Today Sheki is a unique place that has preserved the urban culture inherent to medieval towns. The rare historical and architectural monuments of the town – caravanserais, mosques, minarets, walls and bridges – show the ancient architectural style of Sheki. And I’m sure the festival will strengthen cultural relations and increase tourism to our town. You are all welcome! Elkhan Usubov, head of Sheki Executive Authorities

Before coming to Sheki my family and I watched a documentary about the town and fell in love at once. This really is an old, colourful town. It has beautiful scenery, is rich in crafts and art, and indeed has the wonderful Sheki people. We are very grateful for the hospitality we have received here. It’s already rare to have such festivals in the post-Soviet area. But Azerbaijan is an exception. So much of our culture and so many traditions unite us – Russia and Azerbaijan. Let’s take the example of well-known musicians, artists and scientists who came from Baku; let’s talk about the 130th anniversary of the birth of the famous composer Uzeyir Hajibeyov – a world-renowned figure. How can we forget? Shamil Zakirov, director of Russian state-owned company Commonwealth 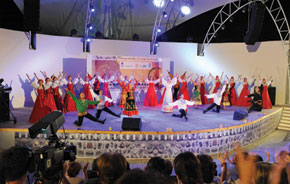 Russia’s Berezka dance ensemble
It’s my first time in Sheki for a couple of years. Many things have changed and the town is looking even better. I’m proud that I’m Azerbaijani. Today we have heard many fine words about Azerbaijan from our guests. They all shared their respect and love for our country, and I’m so pleased to see it. As an ambassador and musician I have to say one important thing. It’s a great pleasure to find such festivals not only in Baku, the capital, but in the regional cities as well. We are very happy that the Qabala Music Festival takes place annually and that this year Qabala is the cultural capital of the Commonwealth of Independent States. Polad Bulbuloglu, Azerbaijan’s ambassador to Russia

The festival opened in the Caravanserai with the ballet Seven Beauties by Azerbaijani composer Qara Qarayev. The performance by the Azerbaijan State Academic Opera and Ballet Theatre went down well with the local and foreign audience. In case you don’t know the story of Seven Beauties, here is a plot summary. The epic poem by Nizami Ganjavi tells the tale of young warrior Bahram who enters a mysterious, locked room to discover the portraits of seven beautiful princesses, each from a different land. When he gains a kingdom and achieves great wealth and power, he remembers the maidens and summons each of them, commissioning an architect to build seven domed structures – one for each bride. Bahram then visits a different bride every day of the week, dressing with care in her signature colours. Each maiden tells the king a tale, an engaging story containing a moral message. The Seven Beauties shows how a ruler who has achieved great wealth and power still needs the wisdom of other cultures. 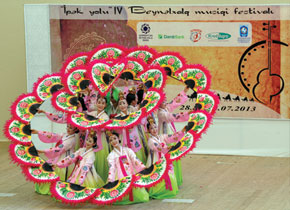 No less original a performance came from the Korean group with their programme of folklore on the second day of the festival. Shin Young Hee, who is a well-known singer in South Korea, sang a sad song about love. The audience loved her song, though they couldn’t understand the words as she sang in Korean. Afterwards, Shin told us what her song was about. 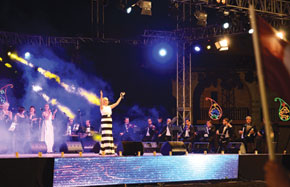 Turkish singers enchant the audience
My song is a story of forbidden love between two young people. The girl is from a poor family and the boy from a rich one. The boy’s parents forbade him to marry her and sent him to another city for a while. The girl loved him and missed him so much that she decided to commit suicide. Fortunately, the boy came back and saved her from suicide. As you can see, the story starts very sad but has a happy ending. The young people stay together forever.

The culmination of the festival can be considered a memorable performance of Turkish song and dance. The Turkish singers’ rendition of the haunting Azerbaijani folk song Sari Gelin went down especially well. The concert was broadcast live by Turkish channels. Another highlight of the rich festival programme was the performances of Azerbaijani mugham singers Alim Qasimov and Melekxanum Ayyubova.

The Azerbaijan State Orchestra of Folk Instruments and the Fikret Amirov Song and Dance Ensemble performed at the closing ceremony of the festival. The head of Sheki Executive Authorities, Elkhan Usubov, and the Azerbaijani ambassador to Russia, Polad Bulbuloglu, rightly described the Silk Way music festival as a remarkable event in the cultural life of Azerbaijan.