Primary Education in Azerbaijan – Looking to the Future 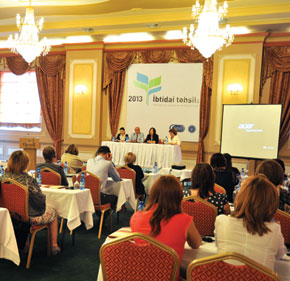 Teachers and educational experts from Azerbaijan and around the world converged on Qabala in August for a landmark conference 2013 Primary Education: New Visions, Experiences and Perspectives. The three-day event explored contemporary theories of education and the impact of new technology. Specific topics included the importance of teachers, parents and children working together, a textbook strategy for Azerbaijan and effective mentoring for teachers.

The conference at the Qafqaz Resort Hotel on 23-–25 August was organized by the European Azerbaijan School (EAS) in Baku. Founded just two years ago by TEAS, the school now has around 200 students, over 40 teachers and provides both primary and secondary education from Grades One to Ten. During the conference, it was announced that EAS had been elected a member of the European Council of International Schools (ECIS), one of the world’s leading educational organizations, dedicated to spreading ideas and experience in the educational sector.

Contemporary techniques for primary teaching are radically different to those applied 20-–30 years ago, particularly regarding concepts of what constitutes knowledge and the challenges that students, parents and teachers face, Darlene Fisher, an education expert and EAS consultant from Australia, said in her presentation. In the past, knowledge meant the ability to memorize facts, rather than mental agility and reasoning, and students were focused on passing examinations. This was not helped by the student:teacher ratio, which permitted little individual attention.

In a video, the British educationalist Sir Kenneth Robinson explained that we no longer have the situation where gaining a degree = job. He acknowledged that the current didactic education system in Europe – and particularly in the UK – developed as a result of the Enlightenment and Industrial Revolution. In the modern world, if students do not conform and are not receptive, they are treated for attention deficit hyperactivity disorder (ADHD). Many schools emphasize the importance of segregation, discipline and conformity. He said that a paradigm change is required, with value being given to original ideas and interpretations. He said thatG group learning is important, and that children should be encouraged to become critical thinkers.

In her summing up, Ms Fisher said constant technological change means that the work requirements of today’s children are not yet known. Moreover, at present, 31 million children per annum worldwide are dropping out of school, as they are unable to conform, and 32 million have to repeat a grade, due to poor marks in final examinations. They have a different set of educational requirements, need to be prepared for lifelong learning and require the confidence to debate. This means there should be less one-way teaching based on standardized texts and a reduced requirement for silence. More active, hands-on learning should be encouraged, with attention being paid to individual needs. In short, education should be based around developing the ability to think. 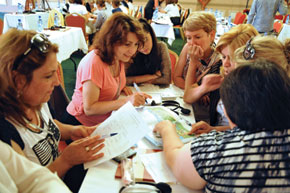 The moderator, Asif Jahangirov, Honoured Teacher of Azerbaijan, acknowledged that the needs of individual children should be the driving force, and that current primary education is not providing useful solutions.

Yuliya Nayda, an education expert from Ukraine, analysed the International Step-by-Step Approach (ISSA) as an alternative to the prevalent ‘one size fits all’. Implemented across 28 countries since 2002, ISSA focuses on the principle that all children have the right to an education that is commensurate with their abilities. She said that children should be encouraged to make choices about the subjects they study, made to feel a success, and that teachers and children should establish an interactive relationship, with teachers analysing themselves to ensure they are working for the good of the children and not for themselves. They need vital study skills and the Early Childhood Environment Rating Scale (ECERS-R) should be implemented to ensure that children are educated in the most creative and stimulating environment.

Mr Jahangirov, the moderator, said that ISSA had been applied in some Azerbaijani schools since 2008, although its use was not as widespread as in Ukraine.

Azerbaijani primary school teachers spoke positively about the use of ICT in hands-on learning. Tarana Sadiqzade, a teacher at EAS, and Bedirnisa Quliyeva, a primary teacher at School No 102 in Baku, recommended the use of interactive white boards such as Smart SMART Bboards or Mimio technology. EAS now uses Smart SMART Bboards in every classroom. 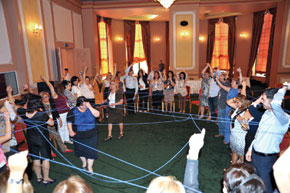 Co-operation between parents and teachers is a necessity, and should be ongoing, Tarana Sadiqzade said. It is particularly important for parents to be engaged, as they can alter their child’s environment.

Yuliya Nayda described the relationship between teachers, parents and children as an essential part of the International Step-by-Step Approach.ISSA.

Shahla Nabiyeva, a primary teacher at EAS, said that many parents do not make the most of their role in developing children’s reading abilities, despite the fact that this can strengthen the parent–child relationship and play a role in forming their personality.

At school, each child should be regarded as an individual, and be encouraged to become self-confident. She emphasized the application of the principles developed by Lev Vygotsky, who argued that new knowledge is dependent on prior learning, and that cognitive discipline determines the development of children’s personalities, particularly with regard to self-awareness.

Canadian educationalist Colleen MacDonell looked at interactive storytelling techniques, focusing on dialogic reading. She has worked in Azerbaijani schools for five years, has learned Azerbaijani and is taking courses to learn the kamancha – an Azerbaijani national instrument. She explained that dialogic reading enables very young children – maybe with no or few words – to become readers, following stories through pictures. Mrs MacDonell stressed emphasized that it is initially important to find a book that the children actually like, and then let them take over and become the story-teller, using the pictures as a point of discussion, and possibly inspire them to read.

Mrs MacDonell said that just as the listener in a concert hall does not learn to play the piano by hearing a performance, a child does not learn to read just by listening to stories. The same is applicable to tuition on Azerbaijani national instruments, where the emphasis is on interpretation and practice, rather than the Soviet approach to classical music, where accuracy of notes is most important. Currently, she undertakes dialogic reading with over 50 four-year-olds at any one time, and this leads to conversations based on books. 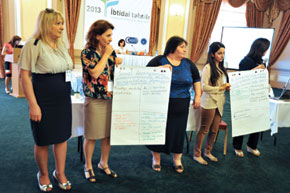 Teacher mentoring – important for all

Filiz Gönenli, primary school principal at Enka Schools in Turkey, explained the importance of teacher mentoring in improving primary teaching standards. There are two types of coaching – peer coaching with an existing, trusted, peer that can provide guidance and with whom the new teacher can march together on the path to success, and instructional coaches, who provide guidance on teaching techniques. No teacher can say that they no longer have a requirement for coaching. Both the peer coach and mentee should always be regarded as equals. Teachers must understand how strategies need to be changed, and the blame culture should be avoided.

The hurdle to be overcome is the territorial nature of teachers, who are unused to mentoring, due to the teaching methodologies in place when they began their careers. Teaching staff from varied backgrounds should work together and collaborate to develop exercises that will operate to the advantage of the students, and the mentor should be there to observe the changing impact on the children. Instructional coaches help teachers learn a great deal, but in the 21st century, teachers are very different. They must learn from each other, and overcome the natural human resistance to criticism.

Elmina Kazimzade, programmes director at the Azerbaijani Centre for Innovations in Education, outlined the new textbook strategy for Azerbaijan. She recalled the Soviet system, where textbooks were produced centrally in Moscow, with no involvement by teachers. Now the Education Ministry in independent Azerbaijan determines strategy itself and publishes its own books. The issue is that book production quality remains poor, with only a few experts working on the books, and scant attention being paid to the content.

Schools need to be free to select their own textbooks, despite the fact that teachers are unused to doing so, and parents should also be able to play a role in book selection. Ordinary teachers need to be represented in book commissioning and selection, rather than Education Ministry employees, and this process needs to be completely impartial. Quality control is all-important, and a long-term creative team to undertake textbook writing, illustration and production should be established. Another issue is that the currently disjointed production process involves printing companies at a stage that is far too late. In fact, teachers, authors, illustrators and printers should collaborate very early in the process, so that the best-quality, most effective textbooks are published. Before any textbook is widely distributed, it needs to be trialled on children, and its impact assessed. 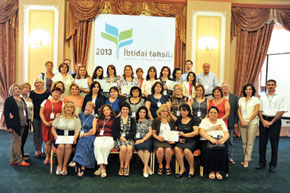 The final day was dominated by an interactive session run by Janna Grinevich, an education expert from Ukraine, who demonstrated some of the classroom activities that she has applied over the past 20 years, aimed at helping children learn to collaborate via the development of social skills. One of these involved each member of the class looping their fingers through some wool, before throwing the ball of wool to another classmate whilst offering a greeting. When all classmates had received the ball, the cradle of wool was raised up above their heads, and class members passed their finger loop of wool to another classmate as they walked beneath. This showed class members making choices, socializing and having faith in their peers. As each child is encouraged to make a greeting, their opinions and voices are heard, and they realize that their opinions count.

Darlene Fisher gave the final presentation of the conference, focusing on the Primary Years Programme (PYP), originally developed more than 20 years ago to help children collaborate and become part of a strong society. The programme was developed by the International Baccalaureate Organization (IBO), and is aimed at helping children become active, compassionate and lifelong learners. PYP was formulated to take into account how children learn, the emphasis being on educating the whole child – not just the brain – and instilling best practice in education. PYP also helps students explore six trans-disciplinary themes – who we are, where we are in place and time, forms of expression, how we organize ourselves, how the world works, and how we share the planet.

Summing up the benefits

The participants concluded that the presentations had been helpful to all the teachers, and that they would be able to return to school and share these new concepts and techniques with their peers. Ragsana Mammadova, TEAS, remarked that, despite the international nature of the event, all participants had found a common language, and hoped that awareness of these concepts would have a multiplier effect in the classroom. In his summing up, Asif Jahangirov commented that the conference had been extremely useful and would spearhead change in Azerbaijani education. He then placed emphasis on the teachers present who would be responsible for transforming these concepts into reality, for the good of children in Azerbaijan and abroad.

For more information on EAS, go to www.eas.az

58050
CultureSpring 2016
The Novruz Tuesdays
by Tahir Shahbazov
more
SURVEY
Which subjects are you looking for on this website?
24%Arts & Culture
12%Food
34%History
6%Sport
25%Travel & Tourism
Number of votes: 699
VIDEOS