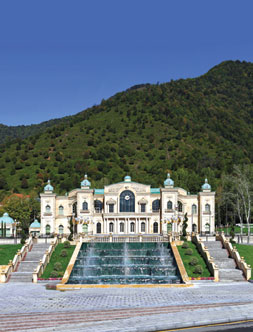 The town of Qabala in north-west Azerbaijan has not only developed as a tourist centre, it has gained social and political weight as well. Evidence of this is the organisation of many cultural and even political events in this beautiful town. Located in the foothills of the Caucasus, Qabala has an excellent infrastructure to welcome visitors, including several modern hotels and guest-houses and an international airport. The latest addition to the town’s facilities is the Heydar Aliyev Congress Centre, which opened its doors in August 2013. The cutting of the red ribbon coincided with the arrival of the presidents of Azerbaijan, Kazakhstan, Kyrgyzstan and Turkey to attend the Third Summit of the Cooperation Council of Turkic-Speaking States. The council, established by the four countries in 2009, held its summit in the new Congress Centre on 15-16 August.

Welcome to the Summit

This was the first time the town had gathered so many presidents and distinguished guests. Presidents Nursultan Nazarbayev of Kazakhstan, Almazbek Atambayev of Kyrgyzstan, Abdullah Gul of Turkey and Ilham Aliyev of Azerbaijan worked hard at the summit, but seemed able to relax, helped no doubt by Qabala’s stunning scenery. During the meeting, the presidents stressed the importance of the summit in contributing to bilateral and multilateral cooperation among the Turkic-speaking countries in political, economic, humanitarian and other fields. Since its establishment, the Turkic Council has taken concrete steps to promote cooperation in the Turkic world. And for the first time in its history, different ministers responsible for different spheres of cooperation came together in Qabala. So, this was a special event in a special venue. 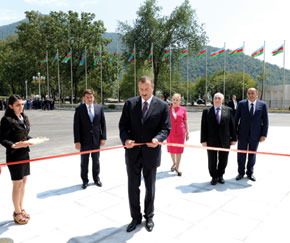 No wonder that during his visit Turkish President Abdullah Gul expressed his fascination with Qabala and the new Congress Centre. The building is really impressive. Located on the bank of the Qara-Chay River with a beautiful panorama, it is able to accept 1,200 guests simultaneously. It covers an area of more than four hectares, and has restaurants, VIP-rooms and modern communication systems. The building consists of three floors and a basement at a depth of 4.2 metres. The first floor comprises rooms, a 300-seat restaurant and offices. A multi-functional, 1,200-seat conference hall is located on the second floor. Besides, there is a 92 sq. m. stage and VIP and security rooms, rooms for art and media and a large foyer. On one side of the building lies a park and on the other a fountain that glitters in the dark. Indeed at night the whole building shines. 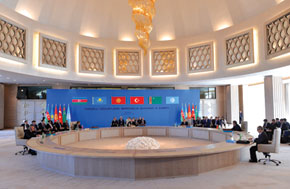 What impressed us was not only the architecture of the centre, but the speed with which it was constructed. As Huseyn Efe, manager of Turkish company TGG, told Visions, the main construction started in April this year, and in just four months all the work had been done.

I remember that when we came here at the beginning of April, we could see just the frame building that had been constructed since summer 2012. In other words, I’m trying to say that we didn’t start to build from scratch. GILAN Holding built the frame, and we completed the rest. As you can see, much has been done. 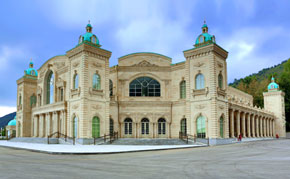 According to Huseyn Efe, some 120 highly qualified experts from Turkey, including architects, designers and builders, were brought here to make the construction possible. And about 600 local people were involved at the site, with work going on round the clock. All building materials were brought from Turkey by special order. The Azerbaijani government supported us a lot, added Mr Efe.

Devrim Gol, senior designer from METEX Design Group, which helped with the interior work, told Visions what it was like to design the Congress Centre in such a short time. The building was constructed over an area of 10,000 square metres, so it’s quite a big space, he said. The outside of the building was done in a classical style, using elements of London city architecture, whereas the inside has some modern elements that are reflected in colour and decor. 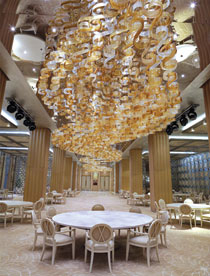 Dining room with Murano glass chandeliers
As you can see, we used a decorative iron inset in the ceiling and walls. Such decor makes an interior very discreet and at the same time unusual. The interior is also decorated with columns made of expensive wood. All the chandeliers were made by special order by Murano glass and brought from Turkey. I think that all the decor is very special and beautiful.

One distinctive feature in the lobby is a decorative wall of onyx, which turns multi-coloured when illuminated. Mr Gol said the wall was one of the most difficult aspects of the design.

Another hard part was the ceiling in the conference hall. It demanded a lot of time and strength from us. The ceiling is also decorated with iron insets and marble. What is very special in the conference hall is a Spanish-made seating system. The hall can serve as a big space for concerts and other entertainment events as well as for conferences and international meetings with 1,200 seats. The system adapts the hall as needed. When they are required, the chairs come out of the floor but remain hidden when they are not required. This is a very expensive and convenient system. It seems as though chair-robots are operating in the hall… 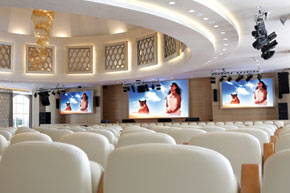 The conference hall with its automatic seating system
Comfort and luxury

There are four VIP rooms for presidents on the third floor. The rooms are luxurious in a modern style. A big foyer leads to terraces on different sides, which allow guests to take a breath of fresh air and enjoy the picturesque view. Not far from the building is an outdoor cafe where guests can relax in the shade of fruit trees and chat to the babble of the mountain river. So, fresh air, scenic mountains, calm, comfort and luxury…what else is needed for fruitful meetings and reflection? In short, the Congress Centre marries functionality and aesthetics, making it one of the remarkable buildings of modern Azerbaijan.