Arsenal Legends and Azerbaijani IDPs Battle it Out 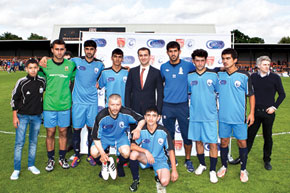 I had only seen the Arsenal Legends on TV… It was a very good experience for us to play against British legends such as Tony Adams, who was captain of England, said Vusal Ismayilov, a 24-year-old Azerbaijani footballer from occupied Aghdam, recalling a day that will stay long in his memory. On 23 June Vusal and five compatriots were at Barnet’s stadium in north London for a charity football match sponsored by The European Azerbaijan Society. A World Refugee & Internally Displaced People’s (WRIDP) XI took on a team of Arsenal Legends.

Further interest was added by the team managers. Former Bolton Wanderers footballer Fabrice Muamba, himself a refugee from what was then Zaire, took charge of the WRIDP XI and the irrepressible Mo Farah, escapee from war-torn Somalia and double Olympic and World Championships gold medal winner, managed the Legends and even turned in a very popular cameo performance in a Gunners shirt.

Getting on for 4,000 turned out to watch the event organised for UN World Refugee Day. Funds were raised for the UK Refugee Council and for the hundreds of thousands of Azerbaijanis made homeless by the Armenian occupation of their lands in Karabakh. As Vusal added, 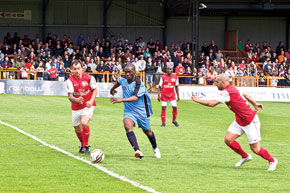 It was a very good event for raising the issue of Azerbaijani IDPs. I should mention the exhibition of photos of the IDPs. The British media were there and I hope it will help our cause a little bit.

The attendance was impressive given the unpromising weather that weekend, and the downpour held off until the entertainment was over. The familiar red shirts of the Legends team were filled a little more fully than usual, but with the likes of Ian Wright, Ray Parlour and Michael Thomas on the pitch there was still some cut to the thrust. And the roof was raised when Tony Adams launched his own added-value assets into a crunching tackle, bouncing spectator memories happily back down Memory Lane.

As well as the Azerbaijani IDPs, the WRIDP XI included players from Cameroon, DR Congo and Cote d’Ivoire and were no pushovers, soon settling into a useful-looking unit. Boosted by the inclusion of guests MEP Syed Kamall and old Arsenal nemesis Mickey Thomas, the visitors struck first. Thomas, who scored in one of the all-time FA Cup shocks when lowly Wrexham beat Arsenal in 1992, was among the sprightliest on view, driving forward, probing the Legends’ defence and bossing his teammates into greater effort. And so it was that his Azerbaijani midfield partner, Vurghun Hasanzade, an IDP from Qubadli, latched onto a pass and weaved his way into the area before slotting the ball into the net. He was naturally on a high at the end: 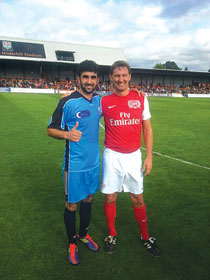 Azerbaijan’s Vusal Ismayilov meets Arsenal legend Tony Adams
A very interesting game. I was very impressed by the huge support from the fans and proud to play with the Arsenal Legends. I never thought I would play against those stars.

It was, as they say, a game of two halves and, pride stung, the Legends responded after the break, forcing Fuzuli-born Oruj Namazov into some fine saves between the sticks. Persistence finally prevailed when Omer Riza nipped in with a coolly-taken equaliser. Ian Wright had a cheeky lob well saved, Ray Parlour struck a post and Mo Farah twinkled on the left, but when retired referee Mark Halsey blew the final whistle, honours were even.

The Rt Hon Theresa Villiers MP, Secretary of State for Northern Ireland, was there to present trophies to the two managers, and players and fans alike joined in the celebrations.

Such was the enthusiasm generated it took some time before the press had had their fill of interviews and fans were satisfied with autographs and pictures. Eventually they left clutching souvenir programmes which highlighted both the day’s entertainment and its message.

Tony Adams, who has lived and coached in Azerbaijan, contributed much to the organisation of the match and was clearly the reason why so many were in attendance, but he too had an eye on the purpose behind the event, 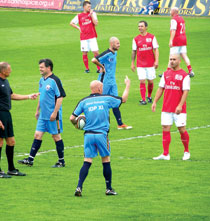 Welsh wizard Mickey Thomas exerts his midfield authority
It is Refugee Week, let’s make it Refugee/IDP Day… I think there are near on 900,000 IDPs in Azerbaijan so… hopefully we can change things, bring awareness to the subject and raise a few quid for the Refugee Council today, so it’s all in a good cause.

TEAS made the match sponsorship decision to highlight the ongoing plight of refugees around the world. Azerbaijan has one of the world’s highest IDP populations per capita, in addition to refugees, due to the Armenian–Azerbaijani conflict. This raged from 1988 to 1994, costing the lives of around 30,000 people on both sides, and resulted in the occupation of a swathe of Azerbaijani territory. A cease-fire was declared in 1994. Despite the passing of four UN Security Council resolutions demanding the removal of the occupying forces, Nagorno-Karabakh and the seven surrounding districts remain under Armenian occupation, causing untold human misery. 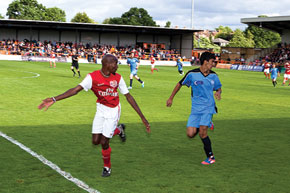 My favourite place was the Arsenal stadium. I would like to play there. They asked how we became refugees and they asked where we lived once we became refugees. And I told them that when we became refugees we lived in a school building for a long time and then the president gave us a house. – Elshad Kazimov, 15, from occupied Qubadli, scored 21 goals for Neftchi FC last season

The most memorable thing from the trip was the game. I played only five minutes and I was nervous at first to play against such experienced players but it was a really good experience for me. I liked Vurgun’s and Vusal’s performances very much! – Oruj Ismayilov, 15, from occupied Khojavend, now playing with Neftchi FC, 10 goals last season 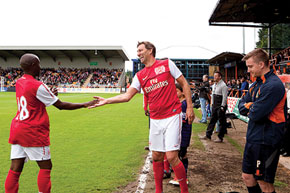 Heroes of track and field enjoy the day
London is beautiful, they showed us the places that I wanted to see! Our team was better. But finally the score was even and the game ended 1:1. We are happy that our plight as IDPs was shown to the world. – Sanan Allahverdiyev, 15, from occupied Fuzuli, now a midfielder with Neftchi FC

London is a beautiful city, its people are warm, it has amazing culture. I really liked the London Eye and Big Ben and would like to thank TEAS for this event. I was proud to play against the Arsenal Legends. English football supporters really impressed me. At the start of the game we were a bit nervous about playing against them, but then the fans’ support helped us to get over our nerves. – Oruj Namazov, 21, from occupied Fuzuli, now goalkeeper for Shusha FC