A Dish Fit for a Nobel: Fish Levengi 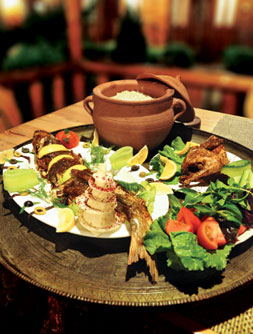 Azerbaijan is obliged to the ironwood tree for its oil boom, at least in part. Many people know that from 1875 the Nobel brothers were active in the Baku oil industry, but not so well-known is what brought the Nobels to Azerbaijan in the first place. It was the ironwood tree. In 1873, Robert Nobel came to the Caucasus to purchase wood for rifle stocks. He had heard about the ironwood tree (parrotis persica), so-called because of its exceptionally hard wood, which grows in the Lenkeran area in the south of Azerbaijan. During his visit, he was impressed by the nascent oil industry on the Absheron peninsula and urged his brothers to join him in investing in it. So the Nobels came for ironwood, but found oil. But if like Robert Nobel, you visit Lenkeran for one thing, you are bound to find much else besides. One of those discoveries could be levengi, another trademark of Lenkeran.

Levengi, a traditional walnut stuffing for chicken or fish, is a favourite dish across Azerbaijan but its origins lie in Lenkeran. It’s a dish for special occasions, especially the Novruz spring holiday when it is traditionally a centrepiece of the groaning table.

The best fish to stuff with levengi is kutum, a type of roach native to the Caspian. If you are nowhere near these shores, any round fish served whole, such as sea bass, perch, red snapper, red or grey mullet, can be used instead. 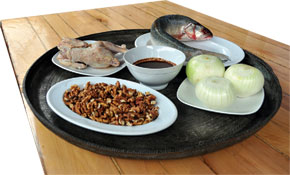 Lenkeran has an attractive, unusual restaurant and hotel called the Khan Lenkeran. It’s a modern take on the old guest houses or caravanserai where caravans of merchants used to spend the night. The restaurant has built a fine reputation, so it was the ideal place to see how real Lenkeran levengi should be made. Chef Miragha Huseynov is just 21, but he is already a levengi master.

However, in keeping with the traditions of hospitality, first, Miragha took us to sit amongst the flowers in the restaurant's courtyard to enjoy some aromatic Lenkeran tea.

Finally the moment came and the demonstration began. Fish should be fresh from the sea or river, Miragha stressed.

In Lenkeran we use only kutum for levengi, no other fish. The taste of kutum is special. First you need to gut and wash the kutum. Then rub it inside and out with alcha paste. This makes the fish very aromatic and attractive. Add salt and pepper to the fish. Now it’s time to put the levengi inside the fish. 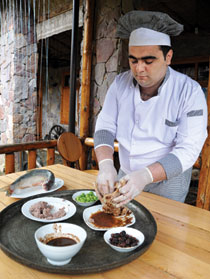 Chef Miragha Huseynov makes levengi
For the levengi you need three large onions and shelled walnuts. Grind them in a machine. Add the alcha paste and fry the mixture for a few minutes. The stuffing is ready when the onions are cooked. Spoon the stuffing into the cavity of the fish, packing it firmly inside. Sew up the fish so the levengi doesn’t spill out, wrap it in foil and put it in the tandir (clay oven). In a city where is no tandir you can use an ordinary oven. The fish levengi should be ready after 40 minutes. Take it from the oven and unwrap the foil. Do the same for chicken. That’s all! So you can see it’s nothing complicated.

Alcha paste and other tips

Alcha are sour green plums, picked before they fully ripen. They are much firmer and sharper than greengages, which are perhaps the closest European fruit in appearance. To make alcha paste, wash the alcha and place them in a heavy bottomed saucepan. Put the lid on the pan and turn the heat on low. Don’t add any water; the drops of water left after washing are sufficient. Steam the fruit for a few minutes until they are soft enough to remove the stones. Take the alcha from the heat. Rub the fruit through a sieve into an enamelled saucepan. Bring the pulp to the boil and simmer for five minutes. Put into sterilized jars and seal.

While Miragha opts for the traditional method of sewing up kutum, you can also take the shortcut of pinning the fish skin together with a few cocktail sticks.

Tangy narsharab (pomegranate sauce) is traditionally served with fish levengi and other types of fish. 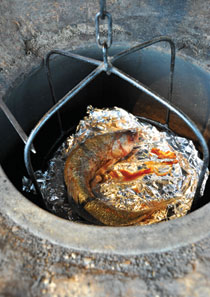 A tandir is a cylindrical clay oven, very popular not only in Azerbaijan, but throughout the Caucasus and Asia. Indeed, the name shares its root with the tandoor oven of India and Pakistan. The heat for a tandir is traditionally generated by a wood fire, burning within the oven itself, thus exposing the food to live fire. Bread baked in the tandir is known as tandir choreyi. Tandir bread goes very well with levengi. Any wood, except the ironwood tree, can be used for the fire. The ironwood tree is too precious. Stronger than oak, it is listed in the Red Book of endangered flora and fauna. When Robert Nobel came to Lenkeran for the ironwood tree, the hospitable local people will have served him levengi baked in a tandir. 1. Thoroughly wash the fish both inside and out. Pat dry. Rub with a little alcha paste and salt and pepper.
2. Grate the onions finely or mince in a nut grinder or mincer. Grind the shelled walnuts.
3. Mix the grated onions, ground walnuts, remaining alcha paste, salt and pepper.
4. Fry the mixture without oil for a few minutes until the onions are cooked through.
5. Spoon the mixture into the fish’s cavity.
6. Sew up the two sides of the cavity with a thick needle and thread or skewer the pieces of fish skin together with cocktail sticks.
7. Wrap the fish in foil.
8. Place on a baking tray and cook for 40 to 45 minutes in an oven preheated to 180C/350F.
9. Place the whole fish on a serving plate, remove the thread or cocktail sticks and garnish with fresh herbs and slices of onion.