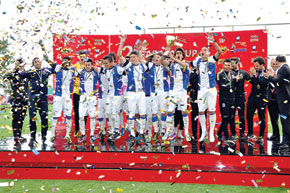 Qabala Cup winners Porto
Qabala has in recent years put itself on the map as a holiday destination of choice for lovers of culture and stunning scenery. But the town in north-west Azerbaijan has also been quietly establishing itself as a centre for sporting excellence. Professional footballers, boxers, judo and karate fighters are fostered by the Qabala Sports Club, while sports teams from across the country use the resort’s facilities for training.

At the end of May some of the best U-15 club sides from around Europe converged on the town for the second-ever Qabala Cup.

Barcelona were the headliners at the tournament, but the other teams were no slouches either: Dutch team Feyenoord returned for the second consecutive year, while they were joined by Porto of Portugal, Besiktas of Turkey, Shakhtar of Ukraine, and Zenit of Russia. Azerbaijan was represented by two teams: Qabala and Baku. The experience for the Azerbaijani sides was invaluable. As national team coach Berti Vogts says in his interview on pages ..., more attention needs to be paid to children’s and youth football if the game is to develop further in Azerbaijan.

PAST AND FUTURE STARS

Some well-known football veterans could be spotted in Qabala during the tournament. Arsenal legend Tony Adams, who is now advisor to the president of Qabala Sports Club, was in town, as were Qabala’s chief coach Yuri Semin, Barcelona’s coordinator of youth football, Albert Puig, and Roy Makaay, veteran Dutch striker who is now coach of Feyenoord U-15s. Makaay is perhaps best known for scoring the quickest ever goal in Champions League history for Bayern Munich against Real Madrid.

It had been no easy job to convince Barcelona to venture to the Caucasus, but the organizers kept writing and phoning until they got their prize. Barcelona came to Baku with the much heralded young Korean player, Lee Seung Woo. Perhaps inevitably, since he is at Barça, the young midfielder is being dubbed the ‘future Messi’. He was certainly mobbed in Qabala with everyone wanting to have their photo taken with him. Lee Seung Woo was part of a very professional Barcelona U-15 team at the tournament. Senior coach Franc Artiga Cebrian has succeeded in creating a family atmosphere among the youngsters from different countries and continents. 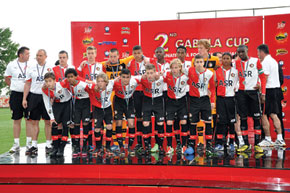 The teams were divided into two groups in the first stage of the tournament. Barcelona and Shakhtar qualified easily from Group A, though Qabala could be proud of their draw with Shakhtar and victory over Besiktas. In their final group match Qabala lost 3-0 to Barcelona to rule out an appearance in the semi-final.

Group B was much closer. Three teams – Porto, Feyenoord and Zenit – all had six points each. Goal difference in their games against each other was then taken into account to decide the two group winners. Zenit ended up the unlucky side, as they had scored two goals but conceded three. Feyenoord had a goal difference of one so finished top of the group and Porto had zero goal difference.

Barcelona came to the tournament as favourites, because of the fine reputation of their youth academy. However, just as the first team lost its reputation of invincibility to the power and flair of Bayern Munich and the grit of Chelsea, the U-15s lost their semi-final in Qabala to the determination and superior organization of Porto. Barcelona put in the better performance in the first half and came out strongly after the break, but once Porto opened the scoring, Barcelona lost their shape and sharpness in attack. Porto took advantage to score a second goal close to full time, sealing their place in the final.

Feyenoord faced Shakhtar in the equally dramatic second semi-final. The Dutch scored early on but Shakhtar kept plugging away. Their determination paid off when captain Aleksey Bikov, the smallest player on the pitch, headed an equalizer in the final attack of the game. As the score was 1:1, the semi-final was decided on penalties. The Feyenoord keeper managed to save two penalties, but the advantage was lost as two Feyenoord players hit the post. The score after both sides had taken five penalty shots was 3:3. Then the shots went to sudden death, but it was only on the seventh penalty that a Shakhtar player hit the post and Feyenoord went through. 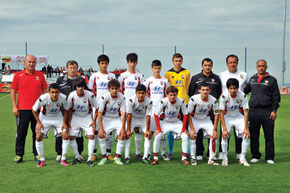 Porto faced Feyenoord in the Qabala Cup Final. The two teams had already played each other in the group stages of the tournament, a game that Porto won 1:0. Feyenoord started the final strongly, taking a two-goal lead. Porto fought back, getting their second goal just before half-time. Neither side managed to break the deadlock in the second half, so the final was yet another game decided on penalties. This time Feyenoord’s penalty takers fluffed their first three attempts, while Porto scored with their first four strikes to win the tournament.

Play-offs were held to determine the teams in fifth to eighth place in the tournament. After narrowly missing out on a place in the semi-finals through goal difference, the Russians ended up with the wooden spoon, losing 3:1 to Besiktas and 4:2 on penalties to Qabala after the score was 1:1 at half time. This was bad luck for the only team that actually beat tournament winner Porto. Meanwhile, Baku, who managed to score only one goal in open play all tournament (in their play-off defeat to Besiktas), finished above Zenit. But that’s football.

Besiktas came good in the play-offs, beating both Zenit and Baku to finish in fifth place. Barcelona got over their semi-final defeat to Porto to beat Shakhtar and finish third.

Barcelona’s Lee Seung Woo was named player of the tournament. The best keeper was Barça’s Joan Fernandez Valero, the best defender Feyenoord’s Rodney Kongolo, the best midfielders Bakhshali Bakshaliyev of Qabala and Dmitro Topalov of Shakhtar and the best forwards Madi Queta of Porto and Rifat Canaslan of Besiktas. Fairplay awards went to Emil Aliyev of Baku and Vitaliy Gorulev of Zenit. 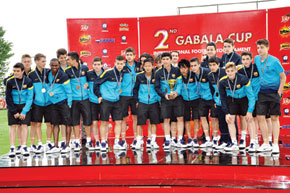 Taleh Heydarov, president of Qabala Sports Club: The attention that the government of Azerbaijan pays to sport, including football, is obvious. Our country has nominated its candidacy to host the European Football Championship in 2020. The president of Azerbaijan, Ilham Aliyev, has signed the appropriate order and Baku is already one of the candidate cities. Azerbaijan is to host the first-ever European Olympic Games, a result of the interest shown in sport by the Azerbaijani government. All of this allows us to say that the young players who took part in the II Qabala Cup will in a few years time meet in European games or championship matches on the continent. Maybe this will happen in Qabala.

Tony Adams, Arsenal legend and advisor to the president of Qabala Sports Club: The II Qabala Cup was organized really well. I watched all the matches. They were very interesting and exciting. It’s good to see that the reputation of the tournament is increasing every year. I liked Barcelona, Porto and Feyenoord. Qabala also made a good impression. We have talented, promising players in our team. Qabala impressed particularly in the first half of the match with Barcelona. They can be proud of themselves. English clubs would also have liked to compete in the tournament, but the timing wasn’t right for them. However, next year, at least two teams from the UK will compete in the Qabala Cup. 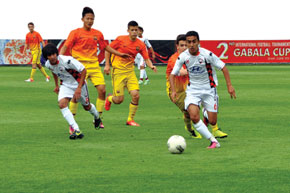 Qabala face the mighty Barcelona
Roy Makaay, senior coach of Feyenoord U-15s: The tournament was organized very well. We played strong teams like Barcelona and Porto. It was good experience for my young players. There is no doubt that our players gained a lot from this contest. In fact, we didn’t set ourselves any target. The most important thing was that the kids should enjoy the tournament and gain experience. I can say only good things about the Qabala club. I can honestly say that the conditions for Qabala are better than those for Feyenoord. If we are invited next year, I’ll recommend to our management that they send the U-15 team to Qabala again.

Franc Artiga Cebrian, senior coach of Barcelona U-15s: I am very surprised with what I have seen in Azerbaijan. The infrastructure of the Qabala club is perfect. I would even say that the best club equipment and ground are in Qabala. Some people may think that, as Azerbaijan is a small country, organization here may not be so good. But from this point of view, Azerbaijan has overtaken some of the developed countries. Strong teams competed in the II Qabala Cup. We are leaving Qabala with good impressions.