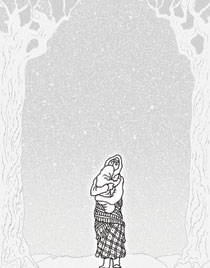 The winter of ’41. A frosty night. Everything, both animate and inanimate, seems frozen. The air bites like an adder, the stones crack, the trees creak, the earth groans, your breath catches in your throat.

In the white darkness a lonely shadow is moving east across the endless snowy fields.

It’s a young mother, hugging her baby as she runs away from the predatory enemy marching through her homeland. Saving her honour from the black hands, she has cast herself and her baby into the arms of this merciless night.

And now, in this white gloom she is heading for the Great Land to the east.

The front line passes along a big river with forested banks. From time to time, the thunder of the guns and the roar of avalanches shake the frosty night.

The mother is in a hurry, she has to get to the front line before first light, she has to take her baby to the other side of the river – to the free land. She must warm the child in her arms with the heat of the fire, the light of day, sunshine.

The mother moves forward, scarcely breathing. She falls down, gets stuck in the snow, struggles and stands up. As long as she keeps moving, time in this night seems frozen too. The seconds don’t pass, the clock’s hands don’t move forward. There is no end to the endless, snowy fields.

The mother gets tired. The frost cuts like a poisoned sword, and it seems to the mother that the sword seeks to claim her baby’s life. Dazzled, the mother seeks shelter, a tiny refuge to hide.

Just up ahead are two birch trees growing side by side like two white columns. The mother goes up to the trees and leans against them, her baby in her arms. There is no other support for the mother in those endless snowy fields.

But the frost burns the mother’s face with its icy fire. Fear writhing in her heart is crying and screaming – the baby is freezing, the baby will freeze, the frail breath in her arms will cease, the weight of the frozen world will fall on his chest.

The mother revolts against that cry in her heart – let the world freeze and turn into ice, let life run from the earth and go underground, the heat of the mother’s heart will not go out, nor will blind force seize that shoot of life from the mother’s breast!

The mother rips off her woollen jacket and wraps it round her baby. Though the mother’s frost-bitten face is red-hot as iron, though her body trembles from the cold that has infused her bones, the mother thinks that it is her baby who is shivering and freezing. She takes her shawl from her head and wraps her baby up again, leaving herself unprotected from the frost.

Now she feels that she is freezing, she has no hope of escaping the icy noose of the frost. Her only support is the two birch trees that are keeping her upright. Again the mother rips something off with one hand and again she wraps her baby up in it. She covers her baby with her last trembling breath and last quiet word – don’t be afraid, my baby; don’t be afraid, my little one, the heat of my last breath is also yours.

Then the mother falls silent. A desperate roar begins in her head, the copper wires humming deep within her ears snap one by one, the mother’s eyelids close, her ragged breath slips down towards her feet and the mother fuses with those two birch trees, motionless in a chain of frost. And now the merciless winter night, the stars clamouring in the sky, makes another garment for the mother. Its icy fingers weave a new dress of white stars and crystals.

The light of the dazzling frosty morning strikes like the sharp blade of a sword. 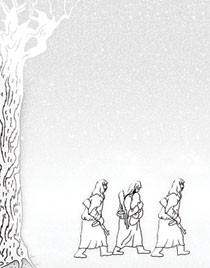 They are three young fighters returning from night-time reconnaissance. They have uncovered their heads and stand unmoving, frozen to the spot, as they contemplate the sight before them, a sight that they will never forget their whole lives long.

It is a statue of a young woman cast in ice.

And the three young fighters hold their breath as if they were standing before a holy sanctuary. They forget how long they have been standing there in silence because the feeling weighing in their hearts like a stone is impossible to put into words!

Finally, an unknown force propels one of them forward. He approaches the ice statue of the frozen woman and stands before it. After hesitating for a moment, he is seized by a crazy hope and checks the small ice-covered parcel in the woman’s hands. His fingers trembling from excitement, he brushes away the snow, breaks the ice with his nails and in a heartbeat unties the covers beneath the ice. He steps back involuntarily at the sight of a small creature gazing out at him. Looking around in confusion at the snowy fields and frozen world, he shouts:

The three them bend over the baby in its mother’s arms. They cannot believe their eyes. They look but none of them can say a word as they are choked with sorrow. Dazzled by the morning light the baby looks in wonder at them from the arms of its frozen mother and smiles – the three young fighters, who have seen many horrors, cannot hold back their tears and wipe their eyes with the back of their hands.

Then they raise their heads and look again at the mother’s ice statue. They bow one last time before her. Now they must return. They walk in a column, taking turns to carry the baby. Whoever is carrying the child walks in the middle, with one in front and another behind in order to protect the baby.

For them the ice statue of the young mother stands eternal, as though cast in bronze, a great monument to the immortal heroism of the mother’s heart.

Translated from Azerbaijani by Nigar Iskandarova