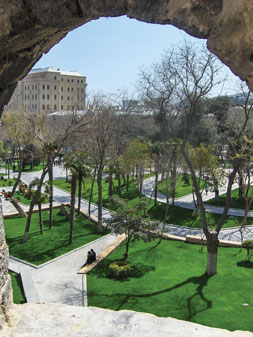 Restoration work is now complete at the Philharmonia Park, just outside the walls of Baku´s Old City. The park, formerly known as the Governor´s Garden or Vahid Park, slopes down towards the Caspian from the Philharmonia Concert Hall. Dr Kamil Ibrahimov, senior researcher at the Old City State Historical and Architectural Reserve, takes a look at how this lush park came to be created in arid Baku.

Architecture in Baku enjoyed a period of tumultuous development during a relatively short time in the 19th and early 20th century. The city had for hundreds of years been contained within fortress walls, but in literally a few years a new city centre was created in what used to be the city suburbs. It was a city centre in the best traditions of the architecture of the time. New residential areas appeared, a system of gardens and parks was laid out, transport and city communications lines were built and oil-refining districts emerged further a field. The city considerably expanded its boundaries to swallow up a number of suburban villages. The city´s appearance also changed as it acquired a variety of styles and trends. Thanks to the work and talent of architects and builders, the only landscaped park was created along the 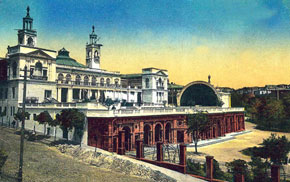 Summer club, the Public Assembly Building, now the Azerbaijan State Philharmonic Hall
walls of the Baku fortress in the early 20th century. This was the Governor´s Garden, a key element in the city´s urban planning and a fine example of a green park.

In 1859, Tsar Alexander II of Russia granted Baku the status of a gubernatorial city. In 1867, Baku fortress ceased to be a military facility. In 1868, Baku´s military governor suggested that the Caucasus military district demolish the outer fortress wall in order to develop the city. Permission was given for the demolition in 1870, but the local population opposed the work. In 1883, the second line of the fortress walls was demolished. At the same time, Zulfuqar Khan´s Gate was relocated to the Shamakhi Gate, which led to the new name of Qosha Qala Qapisi or the Double Fortress Gates.

The Russian Duma or parliament took the final decision to demolish the outer fortress wall at a session in 1886. The internal wall from present day Azneft Square to Natavan Square (outside the Sunset Cafe) was demolished, too. By the end of the 19th century, the Ichari Shahar (the fortress or Old City) 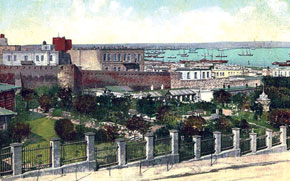 Baku, city garden and harbour, 1899
had lost its outer wall. The decision was thought to be the result of Baku´s urbanization and the need to move residential areas out of the Ichari Shahar. It was decided to use stones from the second fortress wall to build new houses for the residents of the “outer” city, or Vorstadt, and in reconstruction work on the inner fortress wall. The treasury raised 40,000 gold coins from the sale of the stone.

However, construction to the south-west of the fortress walls was impeded by a ditch which by that time had lost its defensive purpose and become unsightly. In 1870, Baku´s military commandant, Foven, ordered that it be filled in.

Creation of an oasis


Few people today know the name of Military Commandant R. Foven; nonetheless the commandant made an invaluable contribution to the landscaping of the capital and created a truly unique park. Commandant Foven obliged all merchants who arrived in Baku by sea to bring as a special duty several cubic metres of fertile soil and seedlings. In this way a large garden was created outside the fortress wall with rare exotic trees and shrubs. Plants were brought from around much of the world – date palms, pistachio trees, acacias, olive trees, crack 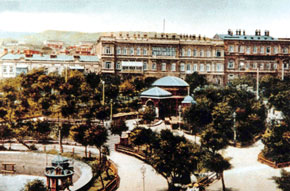 City garden
willow, ironwood, ash, cherry trees, camellias, pomegranate and quince trees. Figs and mulberries (the famous Baku mulberries) were brought from Arabia and Iran. A lush vineyard, where sesame and saffron grew, provided shade for the park. The number of fruit trees and berry bushes in the garden increased in 1853. The bastion fortress wall was dismantled in 1859, enlarging the garden and creating more scope for improvement. Decorative plants were planted and at this time the garden had some 10,000 trees and 13,000 shrubs.

An area that began in 1830 as a small plantation of fruit trees had by the end of the 19th century turned into a “lovely oasis” in the middle of the city, able to compete with the world´s best known botanical gardens in terms of the number of its plants. Well-known architects were involved in creating the garden. In 1876, arbours and pools were made and retaining walls were built in the steeply sloping parts of the park. In 1894, more trees were planted, hothouses were built and paths laid. Alleys of deciduous and evergreen trees and shrubs appeared, with lawns with exotic flowers between them. The jobs of city gardener and agronomist were created to look after and update the garden. The agronomist was concerned with the aesthetic appearance of the garden, 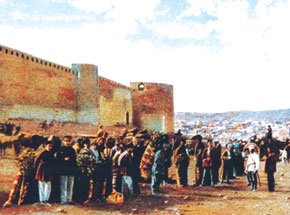 Outside the city walls in the 19th century
expanding the palette of colours and working to achieve beautiful landscape compositions. In 1899, pools were built by the retaining wall, and a grotto entwined with lianas and shrubs was made between the lower and upper parts of the garden. At the start of the 20th century, the garden had expanded so much that its upper and lower parts merged, forming one landscaped park. The Mikhaylov or Governor´s Garden fitted neatly into the city centre.


In 1907, a fire in the Garden destroyed the Public Assembly´s summer club building. A plot of 3,640 sq.m. was allocated for the construction of a large new Public Assembly building with a concert hall, summer theatre and restaurant.
The club was built in Italian renaissance style, but with both Oriental and Western influences, as was the case with all buildings built in Baku at that time. The building, now the Philharmonia Concert Hall, was finished-off with an eye-catching dome and two small towers. At the time people commented on the building´s resemblance to a mosque with two minarets. The many dimensions of the elegant building with its terraces overlooking the lush garden create the impression of an unreal, almost fairytale castle. 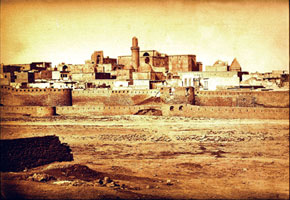 Baku in 1876. In 1883 the second fortress walls were erected
Assembly building was designed by G.M. Termikelov, a St Petersburg civil engineer, and built in 1912. Commercial residential properties were built during this period on the opposite side of Nikolayevskaya Street. Since rented apartments were expensive in this street, only very well-to-do townsmen could afford to live there. Members of the city nobility and intellectuals settled here. Almost all of these houses were built in classical West European architectural style.


An underground passage dating back to the 19th century was recently discovered in the park during reconstruction work. The entrance to the tunnel was found by workers during restoration of a fountain near the Philharmonia. The underground passage starts with a chamber, the descent into which may roughly date back to the 1870s-80s, and then continues with a tunnel that is human height and over half a metre wide. Our preliminary examination of 150-200 metres of the underground passage shows that it first goes towards the road and then on towards the sea, and that in the 19th century sewage outlets were connected to it, probably with the aim of using it as a sewage system.

There is good reason to presume that the tunnel was built in the Middle Ages, originally to supply Baku with water, and was converted to other uses at a later date. 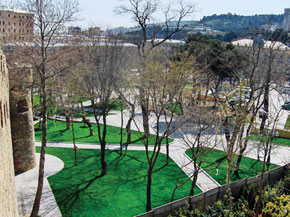 Present view of the Philharmonic garden
Presearch in the Governor´s Garden has discovered a fragment of the foundation of the south-west part of the middle fortress wall built in the 12th century (1138-1139). Archaeological excavations in the Governor´s Garden have also found a fragment of an old water pipeline, or the sewage system of the old city, made from clay (ceramic) pipes, which was laid near the main fortress wall.

Interestingly, the pipeline is not parallel to the surface of the earth, as is normally the case when pipes are laid, but directed inwards. The clay pipes are inserted into one another and sealed with a putty-like solution. A 50 x 40 cm stone was found here at a depth of 1.2 metres, with a 15-cm diameter hole drilled into its centre. It is interesting that the clay pipeline passes through this hole and goes steeply downwards. We can assume that the ceramic pipes were either a water pipeline running to an under-ground well (they date back to the 14th century) or a sewage line running to an old ditch.

Just the entrance to an 18th-century structure has survived in the garden, near the south gate to the Ichari Shahar. It is perpendicular to the main fortress wall. From the five stone inscriptions engraved on its surface, it becomes clear that the entrance is to a palace built in 1384, which was a charitable organization of a Seid Sadulla and later became a caravanserai. In the early 19th century, when Baku was captured by Russian troops, a barracks was established here.

An interesting building was found near the south-west fortress walls, eight to 10 metres north of the entrance, at a depth of one metre. A hollow was found first in the shape of a square, 1.5 x 1.5 metres, with a lining of jumbled-up smooth stones. 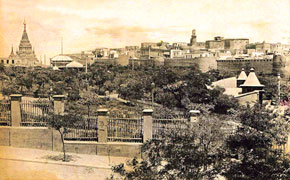 City garden in the early 20th century
At a depth of 1.5 metres it becomes clear that the square hole dates to a later period and is part of a major underground construction -an ovdan or water reservoir that is eight metres high and 12.5 metres wide. The underground building with a domed roof may date back to the 14th century.

Reconstruction work in the park has now finished and has completely changed the park´s appearance. It is now called the Philharmonia Park.
These mysteries revealed to us from the depths of the former Governor´s Garden have shown that old Baku has yet to tell the full story of its rich history.