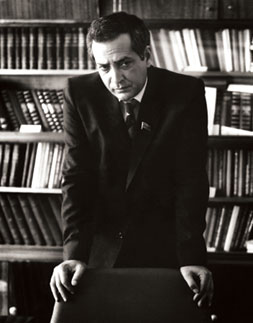 Good acting is relatively common, but it is not so often that an actor becomes synonymous with a role. There are, however, some magnificent examples in cinema history: Kirk Douglas as Spartacus, Nikolay Simonov as Peter the Great or Daniel Day Lewis as Abraham Lincoln. Audiences forever associate the images of these historical figures with the actors who played them on screen. This was the effect for the Azerbaijani viewing public of young actor Rasim Balayev’s performance of Nasimi in the 1973 biopic of the same name.

Rasim knew as a schoolboy in the central Azerbaijani town of Aghsu that he wanted a career on stage and screen, so he came to Baku to study acting at the Azerbaijan State Institute of Art. After graduating, he applied to work at the Academic National Drama Theatre, but was not accepted. Instead he worked for two years at the Tadris (Educational) Theatre, where he gained experience. Much later, when he was already a well-known film actor, Rasim was to act on stage at the National Drama Theatre.

With the Tadris Theatre experience under his belt, Rasim applied to join the acting staff the Jafar Jabbarli Azerbaijanfilm Studios. Director Adil Iskandarov was not convinced. He told the young actor,

You’re handsome but I can’t see what’s inside. I’ll take you on for one year. If you’re needed for a film, they will feel what you have to offer. If they don’t feel it, then you’re out!

A film Three Carnations (Üç qərənfil) about singer Muslim Magomayev was added at the last minute to the plan of films the studio was to make that year. Despite tough competition Rasim was chosen for the role of Magomayev’s friend Oqtay. Just as the young actor was about to get his first break in cinema, Three Carnations was struck off the studio plan. Rasim Balayev thought his luck had run out, but a cameraman on Three Carnations, Rasim Ismayilov, was transferred to the Nasimi crew and recommended Balayev. Director Hasan Seyidbeyli, who had seen Rasim reciting poetry on TV, thought the young man’s face had something of the medieval miniature about it which made him just right for the part. 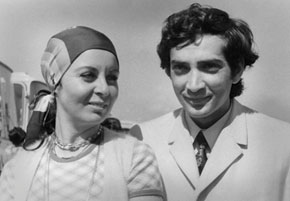 Rasim Balayev was 24 when he played Nasimi, a rebellious poet and philosopher in his 40s who was flayed alive in Aleppo. Balayev’s only prior film experience had been the small part of Ernesto in the film That Sweet Word: Liberty, directed by Vytautas Žalakevičius. Some insiders, therefore, thought he was too young and inexperienced to play Nasimi. However, Balayev embodied the philosopher poet so well on screen that he silenced all the doubters. Indian film director Mrinal Sen said of Balayev’s performance:

This film is a believable story about the great thinker and poet. It has been shot realistically and from a humanist position at the same time. Nasimi is famous in India. And from now on, Rasim will be famous there too.

Rasim Balayev won second prize in the Best Actor category at the VII All-Union Film Festival in 1974 for Nasimi. Following a screening at an International Film Festival in Tashkent, the influential Pravda newspaper described Balayev as the ‘find’ of the festival.

Nasimi made Balayev’s career. That year and the next (1973 and 1974), he played the lead roles in another two films, The First Hour of Life and Qatir Mammad and went on to star in many more. 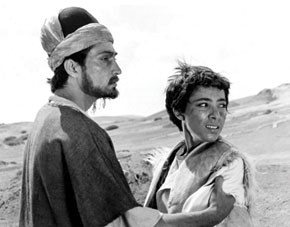 Rasim Balayev had other well-known roles in epic films in the 1970s. In Dada Qorqud, based on the ancient Turkic epic Book of Dada Qorqud, he played a young warrior, Beyrak. Balayev’s Beyrak is a resolute young man, faithful in love, fearless and brave. Even when in enemy captivity far from home, he stands strong. One of the most moving scenes is Beyrak’s reunion with his father Beybura after a long separation.

Ninth-century rebel leader Babak is another historical figure played by Balayev. Talking to journalists before shooting began, the actor could not hide his excitement. He was immersed in the role and could talk for hours about the struggle of the Khorramids against the invaders from the Caliphate and about the heroism of warlord Babak. Balayev received many plaudits for his performance. One of his lines from the 1979 film resonates today in Azerbaijan, It is better for man to live one day free than 40 years under oppression.

A role in a very different genre was in Ayaz Salayev’s arthouse movie The Bat (Yarasa). The subject can be summed up in three words: death in film. The film puts forward the idea that 20th century culture can be divided into two types of hero. The first type is a person mature in the world of culture but a long way from real life. And when he tries to become alive one day, i.e. to return to life, he dies. The second type, in contrast, is alive but thoughtless. When he tries to attain culture and understand himself, he is destroyed.

Rasim Balayev said of his character in the film:

Agabey whom I played in this film is a first type. And Turan, my second wife in the film, the character played by Maria Lipkina, is a second type. The Bat is a film about spectators, or to be more exact it is about the eyes watching a show. Therefore, Agabey was blind. His blindness is related with the advent of sound in film.

Ayaz Salayev, who directed Rasim Balayev in The Bat likes to divide actors too. 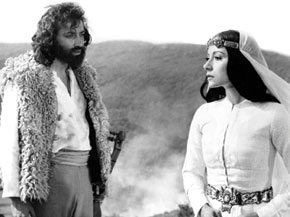 Rasim Balayev as Beyrak in Dada Qorgud
Famous actors fall into two types: the first creates one image on screen and conforms all his roles to that image; the second fully dissolves inside the characters he plays and becomes absorbed in them. Rasim Balayev is one of the latter type...

I think that, in fact, at first sight, Rasim Balayev seems to remain himself in all his roles. We are aware of the process when, after purely positive parts, he begins to perform negative ones. It is exactly in this transitional period that complexity and range of meaning appear in Rasim’s interpretation of these roles as an actor... Rasim Balayev seems to live apart from the other characters and performs a lonely solo. He is an actor with a universal image. The arty professor (The Bat), or the director of a village storehouse (The Tale of a Lonely Pomgranate/ Tənha narın nağılı), look equally natural in Balayev’s universal performance. His great professionalism meant I couldn’t have made a better choice when I was looking for my lead actor for The Bat.

Rasim Balayev has played a wide range of characters in dozens of films. On creating a character, he says:

The actor has also been glad to play supporting parts.

Psychological depth and range of meaning are very important for me in any role. As for small roles or scenes, I should say that they are something of a laboratory for an actor. Here, without threatening the success of the whole film, he can try out new qualities and experiment. 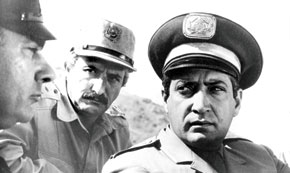 Rasim Balayev as Ali Rza in Siege
One example is the supporting role of driver Jabi in the film Stab in the Back (Arxadan vurulan zərbə). Balayev tried to show all the contradictions of the driver’s character. Since he has a reputation as a womanizer who likes to drink and fight, Jabi is the number one suspect in a murder case. When the driver realizes that other people see him as suspicious, he sets out to find the murderer himself and ends up sacrificing his own life.

Balayev has acted in several dramas in the last 15 years. In What a Beautiful World (1999) he played Mirzayev, a character who benefited from the dysfunction in society in the early 90s, in a way that raised a bitter laugh of recognition from audiences.

Rasim Balayev has also returned to playing venerable figures in the history of Azerbaijan. In 2007, he played Huseyn Javid in the Life of Javid (Cavid Ömrü), a film about the playwright’s life, repression under Stalin and death in exile in 1937. Last year he played another playwright, the philosopher and reformer Mirza Fatali Akhundov in Dawn Herald (Sübhün səfiri).

In the feature film The Fortress (Qala, 2008), Rasim Balayev movingly conveys the grief of a father, holding back tears as he stands next to the body of his son, killed in the war over Karabakh. 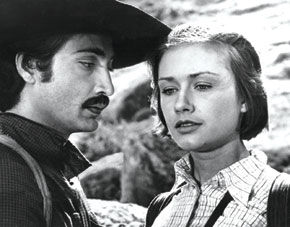 The then president of Azerbaijan, Heydar Aliyev, aptly summed up Rasim Balayev’s work in his congratulations to him on his 50th birthday on 7 August 1998:

By skilfully creating the characters of powerful personalities you have built a bridge between our historical past and contemporary life, and done a great deal to popularize our national and spiritual values. Your creative and public work has been highly appreciated by the state and you have been awarded for your efforts. But your greatest award is the people’s love.

Rasim Balayev has appeared in more than 70 feature films, some of them historical epics, others modern-day dramas. But regardless of place and time, Rasim Balayev conveys to us the fates of his characters. To use the actor’s own words,

I have tried to show the features peculiar to man in all my roles, because every character has his own ideal, his own worldview, his own fate – this is my working principle.

About the author: Aydin Kazimzadeh is a cinema historian, film critic and author of many monographs and articles about Azerbaijani film. He has been awarded the title Honoured Art Worker of the Republic of Azerbaijan.