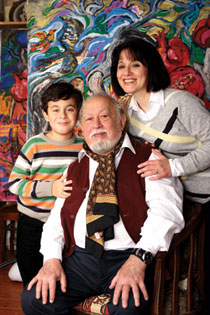 The artist with his wife Sevil and son François

One of Azerbaijan’s leading contemporary artists, Togrul Narimanbeyov, has died in Paris at the age of 82. He was known for his rich, colourful canvases and murals, many of them based on traditional Azerbaijani themes.

Togrul Narimanbeyov was born in Baku in 1930. His surname comes from his great-grandfather, Nariman bey, who was a respected elder in the town of Shusha in Karabakh. Togrul’s father, Yaqub Farman bey, was one of the students sent to study abroad by the independent Azerbaijan Democratic Republic in 1919. Yaqub studied engineering in Toulouse for seven years, where he met and married Togrul’s mother, Irma, a young Frenchwoman from Gascony.

They returned to Azerbaijan, now part of the Soviet Union, but Yaqub’s links with the Azerbaijan Democratic Republic had not been forgotten. He was arrested during Stalin’s terror on 31 December 1937, on charges of espionage. Yaqub was sentenced the following summer to five years in prison in the Russian Far East and Irma, Togrul and his brother Vidadi were exiled to the historic city of Samarkand in Uzbekistan. That’s where the young Togrul attended his first art classes at the Pioneers House. His father was released after completing his sentence and the family were allowed to move back to Azerbaijan, but not to Baku. They lived in Mingachevir until 1956 when his father was rehabilitated under Khruschev and the family could return to the capital. 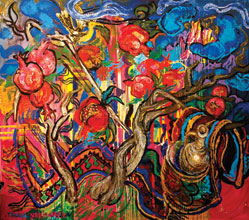 In the Orchards of Azerbaijan, 2006
Togrul Narimanbeyov studied at the Azim Azimzade School of Art in Baku, then at the Lithuanian Higher School of Art in Vilnius where he described the education as ‘global in content’. Interviewed by art critic Mohbaddin Samad for Visions in 2010, the artist talked of how his background had left its mark.

While I lived in Azerbaijan and Uzbekistan, I came across the finesse of the art of medieval Eastern miniature and while I lived and studied in Lithuania, I came across the hardness of the baroque style of Western architecture. Gradually, this Eastern finesse and Western hardness naturally merged in my paintings, producing modernist works of national and universal mood.

Togrul Narimanbeyov painted portraits, still lifes, market scenes and rich, ‘magical realist’ compositions based on Azerbaijani motifs. Despite the pressures on Soviet artists to conform to Socialist Realism, he remained true to his own expressive, emotional style. 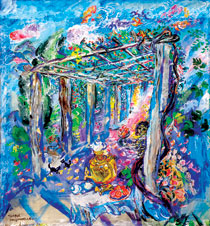 Morning in a Chaikhana (tea house), 2006
He loved to paint very large canvases and murals, some of which can be seen at the State Puppet Theatre and Milli Majlis (parliament) in Baku. He also designed sets for ballets by Azerbaijani composers and did a magnificent set of illustrations for a 1988 edition of the Turkic epic The Book of Dada Qorqud. One of those illustrations, Gazelle Hunt, was included in a recent Sotheby’s sale and exhibition, At the Crossroads: Contemporary Art from the Caucasus and Central Asia.

Of his distinctive style, the artist said, Now and again, I come across these words written by influential art critics and journalists about my work in both local and foreign media: ‘... Togrul Narimanbeyov is an artist with a unique style and manner.’ I like these words very much, because I have sacrificed my life and my health to earn them.

The pomegranate features in many of the artist’s works. He explained to Visions: The pomegranate is our land’s peerless gift. In our fairytales, it is portrayed as the bearer of mystery. The pomegranate is popularly regarded as a symbol of unity, prosperity and cleanliness. I view it as a carrier of the sun’s energy and of the brightness of colours. 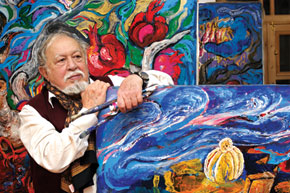 The artist was also a fine tenor who loved Italian opera. While at art school in Lithuania, he also studied classical singing at the Vilnius conservatory. He gave two concerts in Baku in the late 1990s and on his website described himself as a ‘painter-singer’. Togrul Narimanbeyov lived in the USA and Luxembourg for four years, then settled in Paris in 1993. His personal exhibitions in Boston, New York, Luxembourg and Paris were very popular. Explaining his success, the artist said of the Western art-loving public: The abstract works that they come across constantly but which do not feed, or have any effect on, their spirit, exhaust them, so to speak. 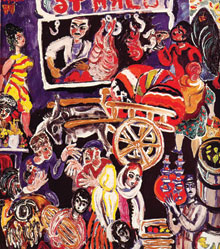 Baku Bazaar, 1986
Viewing his exhibition in Luxembourg, Kyrgyz writer Chingiz Aytmatov commented on Togrul Narimanbeyov’s ‘perfect blood memory’. He said this because he saw the spirit of nationality and globalism in my painting, the artist commented. I think that regardless of their ethnicity, all people of art should be like this. Wherever they are, they are loved and accepted as artists with national memories.