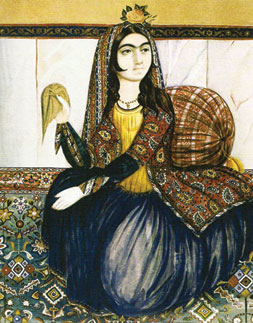 Some of the best works of Azerbaijani culture, whether in literature, art or music, combine the aesthetics of East and West. An artist who synthesized these different approaches to create his own unique style was Mirza Qadim Irevani. Art historian Ziyadkhan Aliyev looks at the life and work of the artist and the evolution of his style through miniatures and Qajar painting (a style named after the Turkic Qajar dynasty that ruled Iran from 1795 to 1925).

The art of miniature painting has a long history in Azerbaijan. It flourished in particular in Tabriz in the 15th and 16th centuries when artist Sultan Muhammad was prominent amongst the miniaturists. The artistic and aesthetic qualities brought to miniatures by Sultan Muhammad and the other painters of the Tabriz school spread across the Middle East – through Iran, the Ottoman Empire, Central Asia and India. However, miniature painting began to decline from the second half of the 16th century, when the capital of Iran moved from the Azerbaijani city of Tabriz. By the early 17th century new artistic trends were emerging in fine arts overall.

A century later in the early 1700s, the Qajar style began to emerge in the art of Azerbaijan and Iran. Qajar painting combined European and Eastern traditions, tools and techniques and was done mainly on canvas. The style was the result of the education of master painters in Europe during the reign of Agha Mohammad Shah Qajar (1795-1797). The style soon spread widely across the country, although miniature painting was still practised.

The work of various Azerbaijani artists of the period shows the unique artistic value of the Qajar style. The new tools and techniques opened up possibilities for art, including wall painting. Wall paintings from this period once adorned the palace of the Tabriz Baylarbay (ruler), the palaces of Huseyngulu Khan in Baku and Irevan, the palace of the Sheki Khans, the houses of the Safibeyovs and Mehmandarovs in Shusha, and bathhouses in Quba, Nakhchivan and Shamakhi, some of which are preserved to this day.

One of the best artists of this period was Mirza Qadim Irevani (1825-1875), who was known for his original style which reflected the synthesis of Eastern and Western artistic traditions. 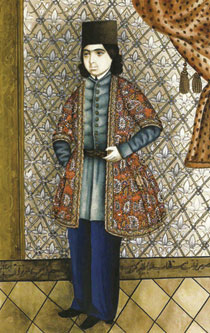 Portrait of a Young Boy (Vajullah Mirza)
Mirza Qadim was born in the Azerbaijani city of Irevan (now Yerevan, capital of the Armenian Republic) in 1825 into a family of artisans. His father Haji Muhammad Huseyn, from a family of beys, was a famous master woodcarver. The young Qadim probably acquired his interest in art from the work created by his father. Qadim’s childhood drawings show his great talent which was recognized by his family. However, we don’t know why Qadim, who seemed to have such a love of the arts, did not get a professional artist’s education. He received his primary education in Irevan, then was sent by his father to study at a gymnasium in Tiflis (Tbilisi), then the main city in the Caucasus. He returned to Irevan with qualifications in a very different profession and worked in his home city for the rest of his life as a telegrapher in the post office.

Mirza Qadim also had a reputation as an intellectual. He knew Persian, Russian and French and researched music history and theory. He had a rich library with works of Eastern and Western, European and Russian literature.

Though Mirza Qadim Irevani died at the age of 50, his paintings earned him immortality and a place in Azerbaijani hearts.

He worked in various areas of fine art, including monumental painting and graphic arts. Portraits and ornamental compositions constitute the larger part of his output. His work on paper, cloth, leather and glass is exhibited in the Azerbaijan National Museum of Art, the State Art Museum of Georgia in Tbilisi and the State Hermitage in St Petersburg. 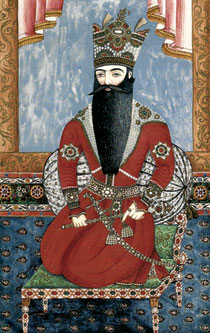 Portrait of Fatali Shah
Mirza Qadim Irevani’s career can be divided chronologically into three phases. During the first period, from 1840 to 1850, he was developing his skills and working mostly in the area of applied arts. He produced sketches, stencils for wall decorations and patterns for traditional Azerbaijani embroidery, known as tekelduz and gulabatin (gold or silver embroidery). He produced eye-catching traditional designs based on symmetry and using motifs of flora and fauna. Nightingales, swallows, peacocks, roses and pomegranate blossom all feature widely in his designs. A particularly fine example is a picture of a nightingale sitting on the branch of a rose bush which is now at the Azerbaijan National Art Museum. Various versions of this motif, considered a symbol of love, can be found on glass, leather, fabric and paper. Another notable example of Mirza Qadim’s work from this period is the stencil Pheasant and Flowers.

Two paintings on glass from this period show the styles and colours that the artist was to use in his later work. Both pieces, Dancer and Dervish, are in the collection of Baku Museum. Painted in oils, Dancer depicts a woman in national costume dancing with a tambourine against a green background. The Dervish is also wearing traditional clothes and the whole picture, also in oils, has a greyish-green hue.

When the artist died, his family had more than one hundred of his works. Sadly, only 23 have survived to the present day. They are the pieces which the family were able to take with them when they fled massacres committed by Armenians against Azerbaijanis in Irevan in 1918. Twenty of these works, water colours or pencil drawings, are now kept at the Baku Museum. They were presented to the museum over time by the artist’s close relatives.

Portraits in oils characterize the second period in Mirza Qadim Irevani’s career. His work during this period decorated the Sardar’s (Governor’s) Palace in Irevan, which had previously been the residence of the Irevan khan. Mirza Qadim was commissioned to do restoration work at the palace in 1850 when he was just 25. His selection for the job at such a young age was a sign of his popularity and reputation. While he was restoring the previous wall paintings, he also painted new portraits in oil on canvas, part of the interior design as a whole. The large hall of the palace was decked out with bright, elegant designs, wall paintings of historical and legendary events and portraits in the Qajar style. Most of the portraits were the work of Mirza Qadim. His subjects included Fatali Shah Qajar, Abbas Mirza, the sardar of Irevan and Rustam-Zal.

The Sardar Palace was destroyed in the early 20th century by Armenian nationalists. Mirza Qadim’s large portraits (200x100 cm) were taken down and carried away to Tbilisi. His Warlord and Fatali Shah are now kept at the State Art Museum of Georgia. 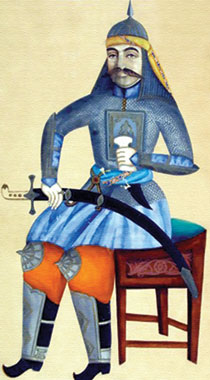 Although he did not study painting specifically, Mirza Qadim seems to have acquired his basis skills, probably from his secular education in Tiflis and from his father. He merges contemporary and traditional techniques, adopting styles from miniature painting and folk art to shape his own unique way of painting. The work of Mirza Qadim Irevani cannot be directly related to the work that came before him, nor to the Qajar style, nor to the traditions of realist art. Though he took inspiration from both artistic styles, his interpretation remains very different and also differs from the work of other Azerbaijani and foreign artists. Mirza Qadim’s work can, however, be considered among the first examples of easel painting in Azerbaijani art, in other words of paintings that are portable and complete in themselves. A distinctive feature of his work is his realistic depiction of his subjects with a conventional, decorative background.

The painter maintained the convention of variegation in colours and patterns for the parts of images that are closer to the ground and ‘weakened’ the colours in areas close to the faces of his subjects. The variety in the images, especially those portraits in water colours, makes them more vivid and attractive. The freshness of colour and expressiveness of his water colours are a sign of Mirza Qadim’s great skill. Examples of this skill, which combine the aesthetics of both Eastern and Western painting, are the portraits Mah Talat khanim, Vujulla Mirza and Young Woman. Something else new for Azerbaijani art in these portraits is the remarkable expression of human psychology. This can be felt in the individual features of the portrait subjects. The maturity of these works is characteristic of the third period in the relatively short career of Mirza Qadim.

Rustam-Zal
One piece kept at the Hermitage in St Petersburg is a fine example of Mirza Qadim’s ability to work with different materials. At first sight, the item resembles the cover of a medieval Eastern manuscript, but in reality it is a gift in the shape of a folder or portfolio. The folder opens to reveal a mirror on the right side and a portrait of a man on the left. The inscription at the bottom of the portrait (‘For General Karvilin’) shows that Mirza Qadim presented the piece to a Russian general visiting the Caucasus. The portfolio features a range of Azerbaijani ornamental art. The decorations on the covers of the portfolio resemble a luxurious carpet. A nightingale with a large bunch of irises and roses painted in bright colours in the middle of the composition is especially fine. A couplet from Sadi, written in Persian in the Naskh script, rounds off the richness of the overall composition.

Throughout the centuries almost all of Azerbaijan’s artists have expressed their very different professional worlds while at the same time embodying received aesthetics. In other words, the values espoused by artists are an expression of the aesthetics and sense of beauty of the nation they represent. Azerbaijanis cherish the works of Mirza Qadim Irevani as some of the finest and most significant in the history of our art.

About the author: Ziyadkhan Aliyev has been awarded the title Honoured Art Worker of the Republic of Azerbaijan. He has conducted thorough research into Azerbaijani art and written widely about it.