Azerbaijan’s Window on the Universe 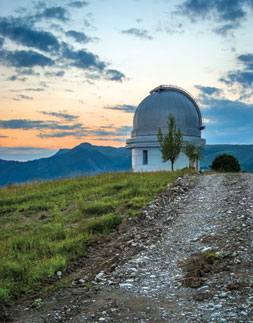 Photo by: Farid Mammadov
Since time immemorial the night sky has held its own fascination. It’s no wonder that astronomy is one of the oldest of the sciences and today too attracts huge interest. Many sites on Earth are associated with the compulsion to study the Moon, the Sun and stars. In Azerbaijan, the rock art at Qobustan, Absheron and Gamigaya in Nakhchivan also has its links to space, while that mysterious ancient monument – the Maiden Tower in Baku – is thought to have been an early observatory. Today Azerbaijan has two observatories, the most important of which is the Shamakhi Astrophysical Observatory.

Where and how did it all begin?

The first prototypes of astronomical observatories date back to antiquity. The remains of ancient buildings built to observe the skies can be found in the former Soviet Union, Middle East (Babylon), Mexico, Peru, England and elsewhere. It was the invention of the telescope that led to the appearance of the modern type of observatory in Europe in the early 17th century.

Azerbaijan has its own history of observatories – in the 13th century Azerbaijani astronomer Nasir al-Din al-Tusi established the Maragha Observatory in South Azerbaijan (now the territory of Iran) which gained renown across the region.

Modern-day astronomy began in Azerbaijan in the 20th century. A permanent astronomical expedition inspected several regions of the Azerbaijan Soviet Socialist Republic in the 1950s, including Shamakhi, eventually selecting Pirqulu as the ideal site for an observatory. Construction began in late 1958 and the observatory officially opened on 13 January 1960. 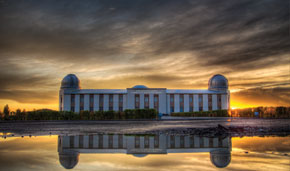 In 1981 the observatory was named after Nasir al-Din al-Tusi, the astronomer behind the Maragha Observatory. Eleven heavenly bodies (asteroids) or their elements, such as craters on the Moon and Mars, have names related to Azerbaijan – one of them, a minor planet or asteroid, is named after the Shamakhi Astrophysical Observatory.

The Shamakhi Observatory reached a new stage in its development in 2008 and 2009, when the president of Azerbaijan, Ilham Aliyev, issued two decrees on reconstructing and re-equipping the facility. As a result, the exhibition hall, museum, conference and lecture halls, six buildings for telescopes, including the building housing the main two-metre telescope, and main administrative building have been overhauled and a canteen and cottages built. The main telescope control system is now fully automated. New modern light receivers have been acquired for all telescopes, and special cameras, a cryogenic plant and vacuum coater for telescope optic mirrors have been installed. Administrative offices, residential and visitor accommodation have all been upgraded.

The Shamakhi Astrophysical Observatory is located on Pirqulu mountain in the south-eastern hills of the Greater Caucasus, about 145 kilometres from Baku and 25 kilometres from Shamakhi, one of the oldest and most historic cities of Azerbaijan. The observatory is in a beautiful spot, popular with tourists. But more important is the climate, which is suitable for astronomical observations. There are between 170 and 180 clear days and nights a year. At least 40% of days have the best quality for astrophysical images. The best months for astronomical observations are December and January, July and August, as these months have the maximum number of clear days and nights. Winter observations from Pirqulu fill the gap in observations at other sites which do not operate so well in winter because of the weather. The best time for solar observations is early morning when the quality of solar images is better. 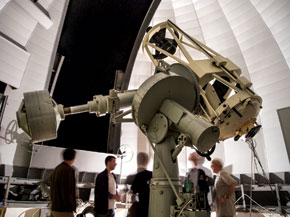 One of the first telescopes installed in the observatory in 1957 was an AFR-3 chromosphere-photospheric telescope which patrolled the Sun for more than 35 years. Another, two-metre telescope with three optical systems is used mainly for spectral observations. The primary parabolic mirror has a diameter of 2000 mm and a focal length of 9000 mm. The AZT-8 photoelectric telescope installed in 1970 is used for photoelectric, polarimetric and spectral observations of celestial bodies. An AST-452 Meniscus telescope with a Maksutov optical system, installed in 1964, is used for spectral investigations of stars mainly in the visible spectral region and fast moving objects. There is also an ATsU-5 horizontal solar telescope used for solar spectral research and photometric investigations of the Sun.

Mirror telescopes are the giants of astronomical observation. These expensive mirrors have to be newly coated at regular intervals to maintain the telescope’s performance. Since 2008, this has been done at Shamakhi observatory using the B-240 system which was installed by German company VTD Vakuumtechnik Dresden. Under this system the mirrors are coated with a homogeneous, highly reflective ultra-pure aluminium layer which can be subsequently coated with a protective layer if required.

A 90-cm AZT-15 Schmidt Telescope is to be installed in the observatory very soon. A number of smaller German-made telescopes are also in operation there.

Observation of space weather is a relatively recent phenomenon. Man has seen changes in space weather, such as the appearance of aurora around the poles of the Earth, for centuries without understanding the causes. It wasn’t until the 19th century that astronomers linked solar activity with geomagnetic storms experienced on Earth. This marked the beginning of the study of weather in space. The Shamakhi observatory began to study space weather and its effects on ecological, biological and technical systems in 1999. The research is conducted in the Department of Physics of Solar-Terrestrial Relations and Laboratory of Heliobiology, in collaboration with foreign colleagues at regional and international levels (especially from Israel, Bulgaria, Russia, Belgium, the USA, Greece and Ireland). The work includes space weather monitoring and analysis, theoretical research and experimental studies of space weather effects, the application of the results (in industry, public health and security), the preparation of young specialists and public awareness. The Shamakhi observatory participates in the UN’s International Space Weather Initiative Programme. 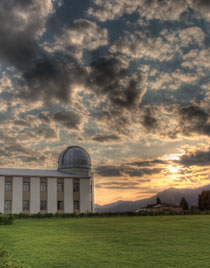 The Shamakhi observatory has made a significant contribution to extensive Soviet and post-Soviet scientific programmes in astrophysics and fundamental astronomy. The observatory works on three main scientific trends: the physics of stars, investigation of solar system bodies and solar physics and solar-terrestrial relations. Current investigations also include the effects of space weather, the history of astronomy, theoretical astrophysics, cosmology, helioseismology, radio-astronomy, practical astronomy, celestial mechanics, galaxies and the dynamics of artificial satellites. In recent years, a new area of work has been the development and construction of astronomical devices such as Echelle spectrographs, used for investigations of celestial bodies.

In 1998 the observatory organized a Tusi-800 Majlis (School) to mark the 800th anniversary of the astronomer’s birth. The event studied Tusi’s scientific work and coordinated astronomical investigations conducted in Azerbaijan and the region. Several high-level conferences have been held in recent years, including the UNESCO Turkic States Space Generation Forum. 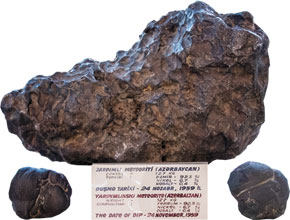 A meteorite found in Yardimli, southern Azerbaijan, in 1959. Photo by: Farid Mammadov
The Shamakhi Astrophysical Observatory is perhaps best known to the Azerbaijani public for its specifications of the exact time of holidays, such as the traditional new year, Novruz. The head of the observatory, Ayyub Guliyev, tells the media the moment of the vernal equinox, the time when the Sun will cross the equator, which marks the start of the new year. Likewise, the observatory specifies in advance when the new Moon will be visible to the naked eye to mark the start and end of the holy month of Ramadan.

Prospects for astronomy in Azerbaijan

Astronomical studies have been conducted in modern-day Azerbaijan for nearly 50 years. Temporary difficulties have been overcome and the country has considerable professional potential and a good observation base.

Besides the Shamakhi observatory, there is another observatory in Azerbaijan. This is the Batabat Astrophysical Observatory (BAO) with its Agdara Astronomical Station, which are both located in Nakchivan and came into operation after Shamakhi. The main research areas at Batabat and Agdara are the Sun, comets, galaxies and other celestial objects, as well as celestial mechanics.

Nakhchivan has a highly favourable astro-climate. In Batabat and Agdara the night sky has a unique pattern. You feel that you can reach out and carefully collect those diamonds scattered over the dark blue blanket of the sky.

About the author: Astrophysicist Elchin Babayev currently researches the effects of space weather on biological, ecological and technical systems. He is executive director of the Azerbaijani President’s Science Development Foundation and deputy director on scientific affairs at the Shamakhi Astrophysical Observatory. A widely published author in scientific journals, he holds a Candidate degree in maths and physics.

315680
TravelSummer 2018
Zigh Salt Lake: The Eighth Wonder of the Absheron
by Tom Marsden