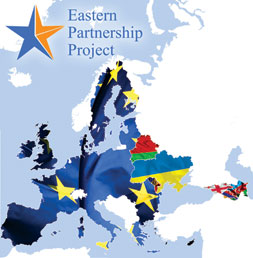 When it began, the Eastern Partnership was considered one of the European Union’s most promising projects. But over time, an air of increasing pessimism has hung over this grouping of six states – Azerbaijan, Armenia, Georgia, Ukraine, Belarus and Moldova – which in turn has sparked rumours of the partnership’s demise. This article considers the grounds for these rumours and the prospects for the partnership.

The Eastern Partnership, or EaP for short, was initially seen as a vehicle for the convergence of its members and the European Union. It was not about getting a ticket for membership of the EU for the EaP Six. That was the fallacy of the high expectations of the EaP participating countries, which to some extent led to a misunderstanding of the purpose and mission of the EaP. The EaP initiative itself was based on the strengthening of relations between the EU and the Eastern partners by deepening their political cooperation and economic integration. At the same time, the EaP neither guaranteed nor excluded the prospect of EU membership for partnership countries. The programme has only offered deeper integration of the partner countries into EU structures, encouraging and supporting them in their political, institutional and economic reforms on the basis of EU standards, as well as facilitating trade and increasing mobility between the EU and partner states.

If you look at the map, you’ll see that the EaP countries are divided into two distinct geographical areas, separated by the Black Sea – Ukraine, Belarus and Moldova, on the one hand, and the South Caucasus trio of Armenia, Azerbaijan and Georgia on the other. So, visually, the EaP looks like a pan-European programme of cooperation with the post-Soviet states that form the eastern border separating liberal Europe from the post-communist CIS.

The Eastern Partnership was launched by 27 EU member states and six partner states at a summit in Prague on 7 May 2009. Poland was the driving force behind it. The Polish foreign minister for the first time submitted the concept of the Eastern Partnership at a meeting of the EU Council on General Affairs and External Relations in 2008. Sweden acted as co-initiator of the programme, and Latvia and Lithuania also backed it. These are among the EU countries closest to the post-Soviet CIS, which means that European liberal values look much more vulnerable on these boundaries, than in the countries in the depths of Europe. 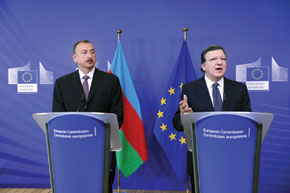 Azerbaijani President Ilham Aliyev and European Commission President José Manuel Barroso
Several factors encouraged the active discussions and promotion of the EaP that began in 2008. First of all, the economic crisis embracing Europe made energy security more topical than ever. The European Union was already concerned about the ‘gas crisis’ between Russia and Ukraine, which threatened energy supplies to Europe and in particular the countries of eastern and south-eastern Europe. The search for alternative sources of natural gas and the idea of a kind of cordon sanitaire, or buffer zone, were part of the thinking on the EaP. A further important factor behind the partnership was the Russian-Georgian war of summer 2008, , which revealed the depths in the conflict of geopolitical interests of Russia and Europe, the former as the successor to the totalitarian Soviet Union and the latter as the bearer of liberal values.

Although the EaP was established quite quickly and all six member states took an active initial interest, today it is experiencing a slight downturn in its activity. There are external and internal reasons for this. Let's start with the fact that initially the countries of the EaP did not have an accurate idea about the prospects of the programme. All six states to varying degrees hoped one day to become full members of the EU family, which contributed to overconfidence in these countries and an ‘impatience syndrome’. In fact, none of the EaP countries is ready to fully comply with EU standards, because not only the political but also the economic components are lame in these countries.

Of all six countries only Ukraine and Georgia could boast political and economic reforms, though the reforms that began after the colour revolutions in the two former Soviet republics had by then not brought the desired result. While Azerbaijan is one of the most attractive countries from the point of view of the richness of energy resources and location, still limping political standards do not make it a candidate for accession to the EU in the near future. The Europeans understand, however, that the country plays an indispensable role in the energy security system. In addition, Azerbaijan is situated in the South Caucasus – a region heavily dependent on Russia, which is known to be jealous of any Western integration. Initiatives such as the EaP are often severely suppressed, as could be seen with the war in Georgia in 2008. Armenia – another country in the South Caucasus – is a strategic partner of Russia and in recent years had been considered solely as a southern outpost of Moscow. Therefore, even though the South Caucasus is an important element in the EU’s energy and political security policies, it receives less attention from the EU than the other three EaP countries. Eastern Partnership summit, Warsaw, September 2011
It should be noted that there is a discrepancy in the relationship. In the early days the lion's share of EaP resources went to Ukraine, as it was considered the most important weight in the geopolitical balance of Eastern Europe. Its size, position on the political map, access to the Black Sea in the south and to the junction of Central European states in the west, as well as its natural resources, economic and technological basis make Ukraine a key target of the geopolitical game. Whoever has Ukraine in their sphere of influence will have the dominant position in Eastern Europe. Not surprisingly, initially Poland and then Lithuania began to show much more interest in Ukraine. However, since 2010, Polish foreign policy has become much more pragmatic, and Warsaw has reduced its activity in this regard. Increasing the Polish presence in the post-Soviet area in order to pull the CIS countries out of Russia's sphere of influence is more a matter of ideology than a pragmatic calculation of national interests. Warsaw clearly has a lower interest in ‘eastern policy’ now than it did when it conceived the EaP. The Russian factor, moreover, is especially significant in the case of Ukraine. For Moscow, to lose Ukraine in the political and geopolitical sense would be equivalent to losing itself. Too much hangs on its plans for Ukraine.

At present, only Lithuania of the EU countries is active in its support for the EaP. It is Lithuania that is seeking to give the regional initiative its ‘second wind’. Sweden has been silent on the Eastern Partnership for some time, while Latvia has limited its involvement to rhetoric about the need to develop democratic institutions and respect human rights in the EaP countries, but is in no hurry to join Lithuania in practical activity in the post-Soviet space. How long will Lithuania be able to pull this initiative by itself? Prospects may become clearer at the Eastern Partnership summit, which is to be held, appropriately enough, in Vilnius in November when Lithuania will hold the rotating EU presidency. The summit is expected to discuss visa liberalization and EU reforms.

The absence of a common EU approach to the Eastern Partnership as well as the change in the foreign policy priorities of the EaP countries blur the prospects of the partnership. The EaP never really got going on Belarus, as the EU did not accept the policy pursued by the Belarusian authorities. Besides, the country has already become a member of the Eurasian Customs Union, the brainchild of Moscow. Ukraine, as one of the most promising candidates for close cooperation with the EU, still depends in many respects on Russia, which does not allow it to pursue a policy of rapprochement with European values. Russia can be either an empire or a democracy, but it cannot be both... Without Ukraine, Russia ceases to be an empire, but with Ukraine suborned and then subordinated, Russia automatically becomes an empire, former US National Security Adviser Zbigniew Brzezinski once rightly observed. 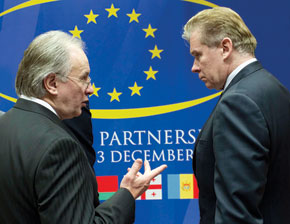 While Moldova’s link with Romania makes it a more promising country for greater EU integration, the unresolved conflict over the pro-Russian region of Transnistria is an obstacle. Similarly, at least three ‘frozen’ conflicts weaken the South Caucasus region – the South Ossetian and Abkhaz conflicts between Russia and Georgia, and the Nagorno-Karabakh conflict between Armenia and Azerbaijan.

Russia is present as a factor in all the Eastern Partnership countries, and any foreign policy manoeuvres have to take this into account. There are, however, cases of resistance to Russian influence: for example, Moscow spoke out strongly in the early stages of the project to build the Baku-Tbilisi-Ceyhan oil pipeline, but the pipeline was built nonetheless, and the Western partners played a significant role in it. This enabled Baku to conduct economic policy partly independent of Russia, making Azerbaijan more attractive for cooperation with the EU. This example shows that the future of the EaP depends not only on the participating countries themselves, but on the willingness and cohesion of the EU to support them and the partnership in future.

315710
TravelSummer 2018
Zigh Salt Lake: The Eighth Wonder of the Absheron
by Tom Marsden