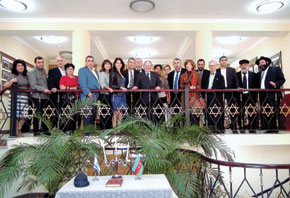 Azerbaijan’s largest Jewish group, the Mountain Jews Religious Community, has a new leader, Milikh Yevdayev. Yevdayev became deputy chairman of the community in August 2011 and officially took over from longstanding chairman Semyon Ikhiilov in March 2012. (Semyon Ikhilov’s fascinating 2008 interview with Visions remains available on this website.) Milikh Yevdayev talked to Visions about changes in the Mountain Jewish community and its life in Azerbaijan.

Following discussions, a new board and new chairman were elected in 2012. The board preferred my candidacy and I was elected the new chairman of the Religious Community of Mountain Jews of Baku.

Right at the start of my chairmanship, I declared to all the community members that the synagogue, newly constructed (2011) as a result of the goodwill of the president of Azerbaijan, Ilham Aliyev, would be open 24 hours a day for all members of the community. The main priorities for the new board will be the following: transparency in the work of the board; the holding of all religious divine services and ceremonies; and assistance as far as possible to low income families.

We have ensured that the synagogue remains open for all community members as well as members of other ethnic groups interested in the social and religious work of Jews in Baku. 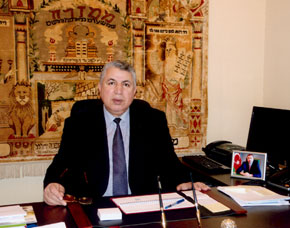 Milikh Yevdayev, head of the Mountain Jews Community in Baku
Support for vulnerable members is an important part of the community’s life. Milikh Yevdayev told us that since 2011 food parcels have been distributed to the needy on all holidays. More than 300 families have benefited from this assistance.

Since 2011, financial assistance of 20 AZN per month has been provided to low-income families who are members of the community. Since late September 2011, the synagogue has organized the baking of kosher Shabbat bread. Traditional matzo (unleavened bread) is distributed to the community members at Passover. Legal assistance is also provided to people in need.

A ceremonial table is laid at the synagogue on holy days such as Rosh Hashanah, Hannukah and Purim. Since October 2012, a feast table has been laid for those who come to pray on Saturdays, the Sabbath, which is a sacred day for Jews.

Another problem facing the community was ensuring minyan, the quorum of 10 adult males necessary for public worship, Milikh Yevdayev said. The problem has been tackled by paying transport costs for members who make up the minyan. This means that members can get to the synagogue in central Baku from any part of the city.

Milikh Yevdayev said that the community now has its own website in Russian, mountain.jewish.az, and a database on Mountain Jews in Azerbaijan. Since December 2012, the community has published a monthly newsletter, Khuneymu-Our Home. The newsletter features articles about the history of the Jewish nation, the activity of the community and other issues.

The community has a new logo, which shows the traditional Jewish candelabrum, the Menorah, inside a Star of David. A Caucasian mountain is depicted within the upper point of the star and the whole logo is encircled by the three colours of the Azerbaijani flag – blue, red and green.

At the community’s initiative, an exhibition stand on the Mountain Jews in Azerbaijan has been opened at the Azerbaijan State Museum of History. 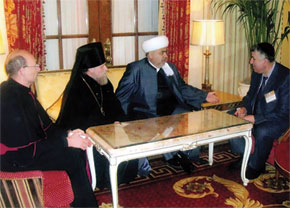 Father Vladimir Fekete, prefect of the Roman Catholic Church in Azerbaijan, Bishop Alexander of Baku,Sheikh ul-Islam Haji Allahshukur Pashazadeh, chairman of the Caucasus Muslims Office,and Milikh Yevdayev
Milikh Yevdayev was keen to talk about the atmosphere of tolerance towards other religions in Azerbaijan.

The model of tolerance, interreligious cooperation and reciprocal respect existing in Azerbaijan is a pattern for other countries. Regardless of religion, race, and nation, everybody in Azerbaijan can freely conduct religious rites and divine services.

I am proud to say that the Mountain Jews living in Azerbaijan for centuries have been brothers of the people of Azerbaijan. They have lived in peace and calm and been able to preserve their national and spiritual values. It is because Azerbaijan is a tolerant country, and here equal conditions are provided for the people of all nations.

We have a representative in the parliament of Azerbaijan, Yevda Abramov, who represents the Quba region. We hold our events in the way we wish. We invite Christians and Muslims to our events. Everything is reciprocal. They also invite us to their religious holidays.

[Factbox] Who are the Mountain Jews?

The Mountain Jews of Azerbaijan trace their origins to the fall of Jerusalem to Nebuchadnezzar in the 5th century BCE. They believe their ancestors were exiled to what is now Azerbaijan.

Other Jewish scholars link them to the Persian and Bukharan Jews, and believe the Mountain Jews became an independent community around the 6th century CE.

The Mountain Jews speak Judaeo-Tat, a language close to Persian.

The Mountain Jews’ new synagogue opened in Baku in 2011 to replace the synagogue demolished to make way for the Winter Gardens. Construction of the new synagogue was funded by the Azerbaijani government.

The largest community of Mountain Jews lives in Qirmizi Qasaba (Krasnaya Sloboda), across the Qudyalchay River from the city of Quba in north-eastern Azerbaijan.