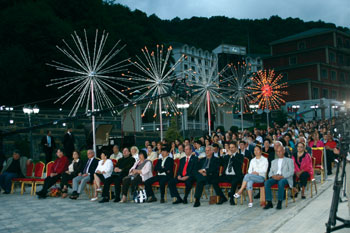 An International Music Festival was held in August in Qabala with the support of the Heydar Aliyev Foundation and organized by Azerbaijan´s Culture and Tourism Ministry and Music Union. The 10-day festival included a young pianists´ competition, classical music nights and a mugham concert. Israel´s Raanana Symphony Orchestra played in several concerts, while 22 performers from 15 countries participated in the pianists´ contest, seven of them representing Azerbaijan.

Soloists of the Academic Opera and Ballet Theatre, People´s Artists Mansum Ibrahimov and Aygun Bayramova performed their solo programmes at the mugham evening.

The festival ended with a fascinating final concert, conducted by American Dmitry Yablonsky. After the music, fireworks lit up Qabala´s night sky in an array of colour.

The finale of the piano competition took place at the Qafqaz Resort Hotel in Qabala on 19 August. Five pianists from Azerbaijan, Russia, Croatia and Japan vied for the highest award. Russian pianist Ilya Maksimov won the contest´s top prize - the Grand Prix. The jury awarded Croatia´s Goran Filipec first prize, Russia´s Aleksandr Yakovlev second, Azerbaijan´s Toghrul Huseynli fourth, and Japan´s Shimomura Misako fifth prize. The jury of Azerbaijani, US, Italian, Spanish, Mexican and Russian judges decided not to award a third prize. The results were announced by the festival´s artistic director, Farhad Badalbayli, and the chair of the jury, Oksana Yablonskaya. Nargiz Kangarli (Azerbaijan) and Nataliya Landfred (USA) were awarded a prize for the best performance of works by Azerbaijani composers.

The winner of first place in the piano competition received a prize of 10,000 manats, second place 5,000, while third place was to have received 3,000 manats.

Musicians described the festival and piano contest as a continuation of the mugham festival held this March in Baku. These major events are now taking place not only in the capital, but across Azerbaijan. Qabala was a marvellous venue for an international festival - the festival raised Qabala´s profile as a tourist destination and showed the region´s ongoing development, as well as promoting Azerbaijani music and its rich traditions.

Member of the Milli Majlis Fattah Heydarov, Israeli Ambassador to Azerbaijan Michael Lavon-Lotem, and USSR People´s Artist Farhad Badalbayli, art director of the festival, all spoke at the closing ceremony.

Fattah Heydarov said that Qabala, one of Azerbaijan´s beauty spots, had enjoyed a real musical celebration over the past 10 days. Describing the international festival as a celebration of friendship, peace and happiness, he expressed his profound gratitude to Mrs Mehriban Aliyeva, whose initiative the festival was. Mrs Aliyeva is president of the Heydar Aliyev Foundation, UNESCO and ISESCO goodwill ambassador, and a member of the Milli Majlis. He thanked the musicians from many countries for delighting audiences throughout the festival. Fattah Heydarov expressed his confidence that the miraculous festival would give a fresh impetus to friendship and cooperation among the countries represented. He noted that the event had showcased Azerbaijan´s scenery, hospitality and music.

Israel´s ambassador extraordinary and plenipotentiary to Azerbaijan, Michael Lavon-Lotem, said that he had been in Azerbaijan for only two weeks when he visited Qabala. The ambassador thanked the Heydar Aliyev Foundation for organizing the event. Commenting on the beauty of the venue, the ambassador said that the festival helped to develop cultural relations between Azerbaijan and Israel. He pledged to work to ensure that similar events would be held in future.

The ambassador said that a group of medical specialists had been invited from Israel with the support of the Heydar Aliyev Foundation in order to treat people with hearing problems. In addition, at the initiative of the Heydar Aliyev Foundation and thanks to the work of the Israeli specialists, a deaf 16-year-old who lived in the region had been able to listen to the festival.

The festival´s art director, Farhad Badalbayli, expressed his thanks to Azerbaijan´s first lady, Mrs Mehriban Aliyeva, and said that the festival had greatly benefited from her care and attention. He thanked everyone who had been involved in making the festival such a success, especially the well-known musicians who had tirelessly given master classes to young pianists. He said that the performances by Israel´s Raanana symphony orchestra would be remembered for a long time.