Azerbaijan in the news Leaders at the Nabucco summit on supplying gas from the Caspian basin to Europe
Azerbaijan´s 16th Oil & Gas Exhibition and Conference were held on 2-5 June at the Heydar Aliyev Sports Complex in Baku.

Addressing the opening ceremony, Azerbaijani President Ilham Aliyev said: “When the exhibition was first held in Baku 16 years ago, it was an opportunity to present Azerbaijan´s oil and gas potential to the world…

The Contract of the Century (to develop the Azari-Chiraq-Gunashli offshore oil fields) and the Shah Daniz gas contract two years later are signs of Azerbaijan´s energy potential today.” The president commented that the Baku-Tbilisi-Ceyhan oil pipeline and Baku-Tbilisi-Erzurum gas pipeline have already crossed regional borders and gained global significance.

“The decisions on these projects were made in Azerbaijan, in Baku, with the investment of foreign companies, they were the Azerbaijani government´s decisions, with the financial support of the international community and international financial institutions,” the president continued. He noted that this year 45 million tonnes of oil would be produced in Azerbaijan and 25-27 billion cubic metres of gas.

The Oil & Gas Show was as usual held under the patronage of the president of the Azerbaijan Republic with the official support of the Ministry of Industry and Energy and the State Oil Company (SOCAR). It was organised by Britain´s Iteca Group plc together with its partners and the Chamber of Commerce and Industry of Azerbaijan. The International Bank of Azerbaijan was the platinum (general) sponsor of the exhibition and conference, while SOCAR was the gold sponsor. This year some 300 exhibitors from 22 countries took part in the exhibition. The UK, Germany, China and Russia had national pavilions, while 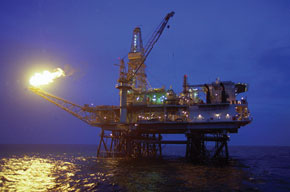 Oil platform in the Caspian
the Oil, Gas and Metal Corporation of Japan and the Oil and Gas Corporation of Georgia and various Azerbaijani enterprises also had their own pavilions. Commercial companies were as usual well represented. Over 10,000 trade visitors from 56 countries attended the show. The largest trade missions came from China, Finland, France, Germany, Italy, Norway, Turkey, the UK and the USA.

Britain´s Prince Andrew, the US president´s special envoy on Eurasia, Ambassador Richard Morningstar, Georgian Prime Minister Nika Gilauri, Turkey´s deputy minister of energy and natural resources, Yusif Yazar, Norway´s deputy minister of oil and energy, Robin Martin Kaass, and other officials attended the event. US President Barack Obama and Britain´s Prime Minister Gordon Brown sent letters of congratulation to Azerbaijani President Ilham Aliyev and the exhibitors. Some 450 delegates from 23 countries participated in the twoday Caspian Oil & Gas Conference at the Hyatt Regency Hotel. The conference discussed a wide range of options for transporting oil and gas from Azerbaijan as well as the potential for transporting Caspian energy resources to world markets. The conference focused on the Caspian basin and its status as one of the main energy suppliers to Europe.

Azerbaijan has a large transportation network. Seven oil and gas pipelines deliver the country´s oil and gas to the outside world. There are three oil pipelines - Baku-Tbilisi-Ceyhan, Baku-Supsa and Baku-Novorossiysk - while three of the four gas pipelines are currently operating. The Azerbaijani government has signed 22 major oil agreements with consortiums of foreign oil companies. More than 30 billion US dollars have been invested in the Azerbaijani oil sector since 1994. All this makes Azerbaijan an attractive venue for the oil and gas exhibition.


Azerbaijan´s State Oil Company, SOCAR, and Russia´s Gazprom signed the main terms of contract on the purchase and sale of Azerbaijani natural gas on 29 June. The document was signed during Russian President Dmitriy Medvedyev´s official visit to Baku. Russia is going to pay a record price for Azerbaijani gas - $350 per 1,000 cubic metres, Russian newspaper Kommersant reports. From 2010, 500 million cubic metres of gas will be sold to Russia every year and the volume will increase in future. Gazprom will use Azerbaijani gas to supply Russia´s southern regions. “Today Gazprom and SOCAR broke new ground,” Azerbaijani President Ilham Aliyev said after the signing ceremony. 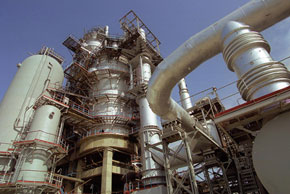 Gas compressor in Azerbaijan
An intergovernmental agreement on the Nabucco pipeline project to supply gas from the Caspian basin was signed on 13 July by the governments of Austria, Hungary, Romania, Turkey and Bulgaria with the participation of EU President Jose Manuel Barroso in Ankara. The agreement sets the legal framework for Nabucco over the next five years. The pipeline will run through all five signatory states. It will cost some eight billion euros and cover 3,300 kilometres. The pipeline is expected to be finished by 2014 and will have an annual throughput capacity of 31 billion cubic metres. Initially, the pipeline will carry 8 billion cubic metres which Azerbaijan is expected to supply. Turkmenistan is another potential supplier of gas to the pipeline, but the Caspian Sea´s undetermined legal status means that Caspian resources cannot yet be used as an alternative supply of energy for Europe. Industry and Energy Minister Natiq Aliyev represented Azerbaijan at the signing ceremony.

Azerbaijani President Ilham Aliyev welcomed the signing of the intergovernmental agreement: “Azerbaijan was one of the initiators of Nabucco. We have always actively supported the project. But when Nabucco first appeared on the agenda Azerbaijan was not considered a potential supplier. At that time our resources were low. If it´s beneficial for us, we can sell our gas to Nabucco when the project comes on stream. We have enough reserves for this.”


Israeli President Shimon Peres made an official visit to Azerbaijan on 28-29 June. The Jewish community has been living peacefully in Azerbaijan for more than 2,700 years and enjoys prosperity and equality in the country. Since independence Azerbaijan has maintained political, economic and cultural relations 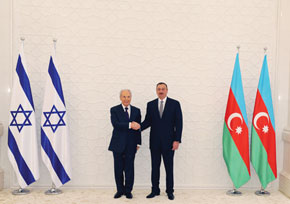 Azerbaijani President Aliyev receives Israeli President Shimon Peres in Baku
with the State of Israel. Trade turnover between the two countries was $3.6 billion last year. Hebrew has been taught at Baku State University since 1993. “The visit will be a new impulse in Azerbaijan-Israel relations,” Arthur Lenk, Israel´s ambassador to Azerbaijan at that time, stated before the visit. Three ministers and some 50 businessmen were part of the Israeli delegation.

The Azerbaijani and Israeli governments signed two agreements - on cooperation in culture, education and science and on cooperation in information and communication technologies. President Ilham Aliyev said that he had discussed the current situation in the Middle East and Caucasus, including the ongoing conflicts in the regions, with Shimon Peres. Ilham Aliyev said that energy cooperation between the counties would continue in future too. President Peres touched upon the bitter results of the Armenian occupation for Azerbaijan, including the problem of one million internally displaced persons and refugees in the country. President Peres highly appreciated the tolerant environment in Azerbaijan. Both leaders emphasized the significant role of Jewish emigres from Azerbaijan to Israel in cementing links between the two countries and expressed their confidence about the future development of relations.


President Ilham Aliyev paid an official visit to the UK on 13-14 July. On the first day of the visit Mr Aliyev met Prime Minister Gordon Brown. The leaders discussed energy issues, Azerbaijan´s relations with the European Union, economic, political and other links between the two countries and the 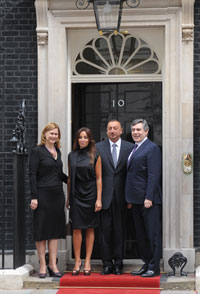 President Ilham Aliyev spoke on the Foreign Policy Challenges for Azerbaijan at the Royal Institute of Foreign Affairs (Chatham House) and answered questions from the audience.