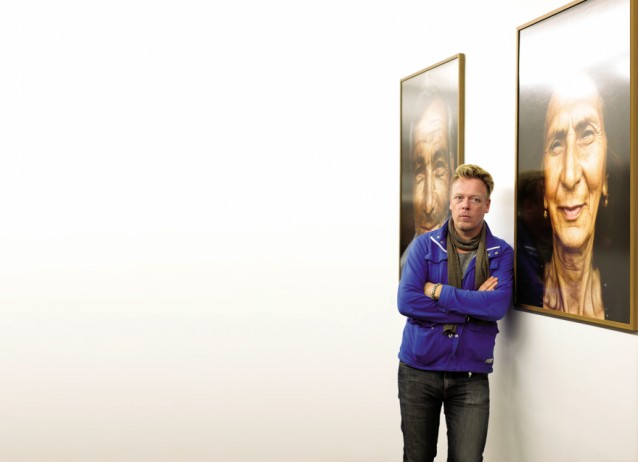 Philipp Rathmer is an excellent photojournalist and this is particularly evident in his remarkable new exhibition, Five Roads Back Home, which was organised by The European Azerbaijan Society (TEAS) at Epicentro art in Berlin from 12–15 October. The opening on 11 October was attended by over 500 leading figures from the worlds of the arts, media and society.The 50 photographs capture the continuing plight of some of the 875,000 internally displaced persons (IDPs) and refugees from the Armenian-occupied Azerbaijani territory of Nagorno-Karabakh and seven surrounding regions. Despite four UN Security Council Resolutions requiring the Armenian military to leave nearly 20 years ago, the occupation goes on and these people, unable to return to their homes, continue to live in camps across the country.

Philipp recalled:
In July 2012, I spent one week visiting IDPs and refugees in the Azerbaijani towns of Takhtakorpu and Gunzali, near the Armenian border, and Darnagul and Gizigum, north of Baku. Throughout, I aimed to represent the suffering of these people by focusing on their faces in extreme close-up. Each subject was shot in exactly the same way, against a black background and lit by indirect sunlight, the emphasis being placed on capturing the faces and stories of the people. You can see the problems in their eyes and wrinkles. The focus was on the human situation ¬– I noted each subject’s name, age, occupation, the name of the camp in which they were living and the town from which they had been displaced. They also spoke of their aspirations, one of which was common to all – they wanted to return home. The subjects were aged from six to 86 years, so some have never even seen their homeland.

Many people are unaware that Azerbaijan contains the greatest proportion of IDPs in the world, and that nearly 20 per cent of Azerbaijani lands remain under occupation. The IDPs and refugees will not see the direct results of this exhibition, but they now realise that people outside Azerbaijan actually care about them and understand that they have the right to return to their lands.
A short film was then screened about the Five Roads Back Home project, and the exhibition catalogue was presented. Five Roads Back Home may be exhibited in London, Paris, Brussels, Istanbul and Baku in the next few months.
The opening was a thought-provoking occasion for many of those in attendance. The photographer expressed his feelings about the project, as did some of those who came to see his work and ponder the plight of his subjects.

Philipp Rathmer: It was an emotional journey. Every person I photographed had their own story to tell and I heard a lot of bad things. But everyone I spoke to had experienced something brutal, and it made it hard to focus on one subject there. The region around Nagorno-Karabakh consists of seven regions, which belong to Azerbaijan but are occupied by Armenia. The people I photographed all come from those seven occupied provinces.They were forced to flee by the Armenians and the war. A new frontline has been formed and there are firefights on a weekly basis. So, it’s a conflict which still continues and has yet to be ended. I was approached by The European Azerbaijan Society. Last year I had a large exhibition for Hear the World in Hamburg. Two representatives of the Society were at the exhibition. They were so impressed that they also wanted an exhibition about their country. I was approached and asked if I was interested in doing a project for Azerbaijan. I had one assistant with me and I had already worked out my concept. I did not want to photograph these people in their camps. I wanted to avoid emphasizing the background, for example a hut – such a background creates a different emotional response than showing just a face. That’s why I decided to photograph them standing in front of a black background. I had a black tent with me with only one opening. It was erected facing south with the opening on the northern side. I managed to make these portraits with the aid of this indirect sunlight. There are many dramatic scenes. People who have lost their families or have been maimed. Some of the stories I heard had so much to do with the war. Others told me normal everyday things. For example, one man told me he was just looking for the woman of his dreams. The exhibition is being held in Berlin because The European Azerbaijan Society has its German headquarters here. Five possible galleries were considered. We visited this gallery first and I knew that the exhibition had to be held here.

Tale Heydarov, Chairman of The European Azerbaijan Society: When I was in Hamburg last year I believed I was attending a gallery showing something that told the story of our own people. 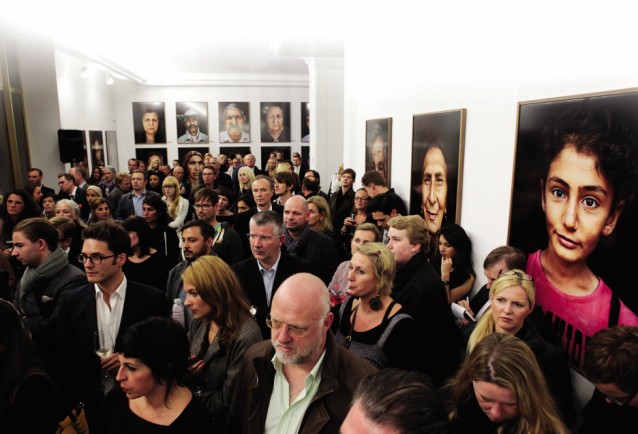 Question: Is there any particular photograph which stuck most in your mind?

August Hanning, Ex-Head BND: The photographs of the older people. Looking at the photos now there’s a striking picture of an old lady; one can see her experience literally etched in her face.

Question: Why is such an exhibition so important today?

Well I believe that the conflict in Nagorno-Karabakh is a forgotten or “frozen” conflict. Hostilities could break out anytime there, but it’s also important to not forget the humanitarian aspect. It’s an unsolved problem on the edge of Europe. We all have the duty to help solve this problem. We have to stay optimistic. Negotiations have taken place without any breakthrough. Exhibitions such as this one ensure that the problems there are not ignored.

Annabelle Mandeng, TV Presenter: I have always admired Philipp Rathmer’s work. He also did an exhibition for Hear the World, showing deaf children in Kenya. Once again he has managed to bring out personalities using a dark background. One has a clear view of the faces and also their eyes. I find Philipp is exceptional at this and I’m very impressed. I think it’s right to highlight the wrongs in this world and it’s much easier to achieve using a striking style. It enables people to look at and talk about the topic more freely. Rathmer’s style allows this and it is perfect for this exhibition. 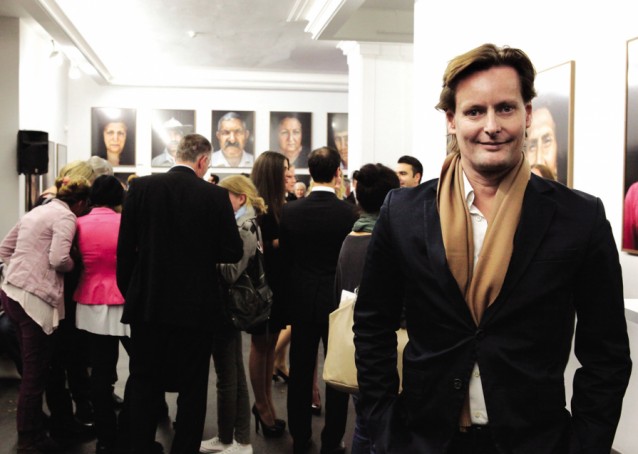 
Question: Is there any picture which has impressed you most?

Annabelle Mandeng: Yes, there is one, it’s a picture of a girl featured in the film. [Afat Karimov, caption: Afat is learning English in school so that she can tell people all over the world about life in refugee camps.] The expression on this twelve-year-old girl’s face made an impact on me.

Philipp Rathmer: Personally, for me it’s a success when people come. I think it is especially important that when we visit Baku, the people portrayed in the images get to visit the exhibition. That has to happen; it is extremely important that they see the result of the photographs. How do they view the portraits? That would interest me.