History
by Jeyran Bayramova
24190
As global experience demonstrates, economic development is more advanced in countries with well-established small and medium businesses. In Azerbaijan the main demand for professional skills comes from the trade, agricultural, service and other sectors, many of which have links with the vocational schools that produce valuable personnel for those sectors. This is relevant nowadays for a Baku experiencing a boom in the construction of new luxury hotels and restaurants and development in the city’s infrastructure to accommodate a new sector for Azerbaijan – tourism. Thus vocational education needs to meet increased demand for trained personnel. For comparison, in highly-developed economies 50 per cent of graduates are from vocational schools, whereas in Azerbaijan they comprise just 5-8 per cent. Although this kind of education has been on offer for some time, people’s interest in vocational schools still leaves much to be desired. Why is this? And what is the future for vocational schools in Azerbaijan? We try to answer these and other questions in this article. But first, let’s take a brief look at the story of one school’s establishment.

The first vocational school - in Sheki

The history of vocational schools in Azerbaijan goes back to the early 19th century, so there is long experience. It all began in the 1830s when the different skills and knowledge of horticulture and agriculture being taught as an additional subject at schools in villages and towns were found to be ineffective. Graduates of these schools often believed that they were superior to others; they were indifferent to production and most keen to be office employees and officials. Thus it became necessary to open special schools to teach specific skills. In the 1870s and 80s courses were organized both at existing schools in villages and towns and at independent specialist schools.
The first vocational training school for the development of sericulture was opened in Nukha (now Sheki) in 1843. The Practical Sericulture School was of particular importance for the development of silkworm breeding throughout the Caucasus. Significant steps were also taken to meet the demand for vocational training in Baku. Navigation was increasingly important and a separate naval school was organized to develop Caspian navigation in 1881. The growing oil industry and the strengthening of capitalist relations in the early 20th century led to demands from the owners of factories, plants and oilfields for the government to open technical schools to prepare personnel for industry. By 1914 there were already fourteen vocational schools; four providing secondary vocational training and the others operating at lower levels.

In the 1920s technical specialization was a priority for the new Soviet regime in Azerbaijan as it realised the problems caused to industry by the workforce’s ignorance and lack of technical knowledge. On 5 August 1920 the Revolutionary Committee of Azerbaijan issued a decree On Creating a General Technical Vocational Education Committee under the People´s Commissariat of Education.
In December 1921, on the initiative of the Azerbaijan Komsomol Organization, a Factory-Plant Apprenticeship was opened in Baku; it prepared metallurgists for the Lieutenant Schmidt Machine Building Plant (nowadays the Sattarkhan plant). In November 1940, 32 new-style vocational education institutions, as well as 12 vocational schools, 2 railway schools and 18 Factory-Plant Apprenticeship schools were organized in the republic. There were 45 technical vocational schools in 1965, and 76 in 1970. Nearly 40,000 students were studying 150 specialities in these schools.

Economic development in 1970s Azerbaijan and the rapid development of industry and agriculture required the preparation of trained and qualified workers, stimulating the further development of technical vocational education. In the academic year 1982-1983 the republic boasted 184 technical vocational schools, with 110,000 students studying 230 vocations. But in the late 1980s social and political processes within the USSR led to a decline in politics, the economy and culture, as well as the system of technical vocational education.
Political and economic instability in the early years of independence saw the closure of some vocational schools and the pillaging of their property. Although some steps were taken to improve the situation, the schools were unable to provide the country’s recovering economy with a workforce familiar with modern technology. Effective measures were required.
New wave of development in Technical Vocational Education. 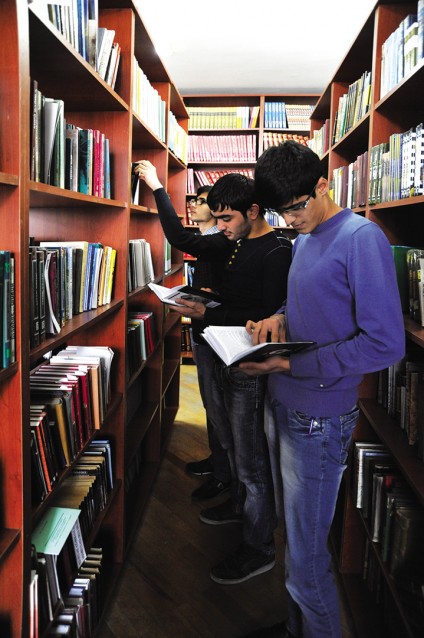 Since 2007, after President Ilham Aliyev signed an order confirming the State Programme on the Development of Technical Vocational Education, the situation began to turn around. The main aims of the programme were to strengthen the material-technical base of vocational education and improve the management and training of personnel.
As part of the programme, a vocational school for tourism and hoteliers was re-opened as a joint project with the European Training Foundation in Ismayilli; a training centre was organized in a former automobile industry skills centre with a British company in Baku; a vocational school for agriculture was founded with an Austrian organization in the IDP settlement in Bilesuvar; a higher vocational training complex was built with the South Korean company Daewoo, in Baku.
As a result, there are now 107 vocational training institutions in Azerbaijan. Over 100 specialities are studied by more than 23,000 students and the budget is increased every year: from 4.6 million manats in 2003 to 10 million in 2006. In recent years more than 40 new specialities have been set up in vocational schools; a number of which are concerned with the tourism sector.

This vocational school previously known as the 11th Baku College is a new lamp for old. Based outside the city centre, the school was home for young students for many years, leading to graduation in commercial cuisine. Where do the best chefs study? – At the 11th of course! was often heard. But for a year now it has been the Tourism Vocational School, working to produce new professionals in every aspect of tourism. Jamalatdin Akhundov, Deputy Director of Studies at the School, told us that it was so named as it is responsible to the Ministry of Culture and Tourism of Azerbaijan, and he listed the new occupations that youth will pursue in their future. They include travel agent, hotel administrator, eco-tourism guide, national park guide etc. 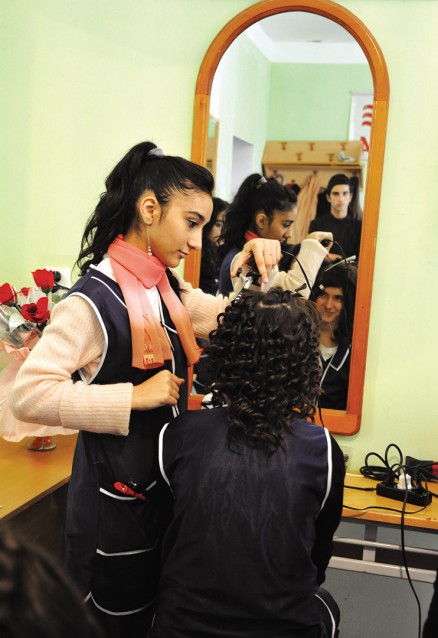 In their study programme all students take four classes in theory and one practical class. The practice is undertaken in various tourism agencies, hotels and restaurants in Baku. After graduation the students are often offered jobs where they have previously practised. Employers are invited to be involved in final exams to ensure that students’ knowledge is properly tested. Successful students are offered jobs.

Radmila Mustafayeva, chef trainer at the Tourism Vocational School, told us that the school produces the best chefs in Azerbaijan and that they find jobs easily in the top hotels and restaurants. Many of them participate in international cooking competitions and come back with awards. Indeed, as new hotels and restaurants are opened during Baku’s rapid development, so demand for chefs also rises, and there are plenty of jobs on offer.
Elshad and Tarlan are 17-year-old students training with Radmila khanim. They are keen to strive for work at top class hotel restaurants like the Hilton and Marriot. They are studying hard now and doing their best in practice. As they tell us, the best chef needs a good imagination to devise new delicacies – coupled with patience.
And first of all, clean hands, adds Radmila khanim with a smile. However, she noted, students of other occupations: waiters, barmen, doormen…unfortunately have problems in practice. Compared with chefs they are not always given the same attention.


It should be better…

Saadat Khojatova, trainer in tourism, admitted that the quality of services in hotels and restaurants still leaves something to be desired.
That’s a fact. In recent years an increasing number of hotels, SPA, leisure centres and restaurants have been built in Baku and other regions, but there are some problems with improving services. It isn’t that our students lose their skills and knowledge after graduation. It is a different matter. 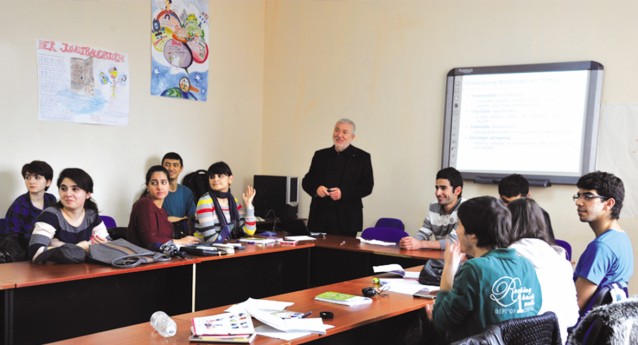 According to Dr Eldar Aslanov, Vice-Rector of Tourism Institute, the main problem is that of insufficient development in marketing in Azerbaijan. The Soviet system had a major influence on both the politics and socio-economics in the country; it is quite a challenge to develop liberal market relations. It takes time to install a new system. Considering that Azerbaijan was under the Soviet regime for 70 years, it is not surprising that the transitional period has been accompanied by certain difficulties.
Many hotels and restaurants hire a crew recruited from relatives. And that’s understandable. In the current socio-economic conditions people try to provide jobs for their relatives and friends, even those who don’t have the professional skills of, say, a waiter or doorman. They even occupy positions as sales managers or administrators which demand a strong professional approach. But the problem is that salaries are not very high; those who are professionally qualified obviously want to be paid more and remain unemployed. So we have some hotels and restaurants with the minimum quality of service and the maximum number of professionals without jobs. Of course this doesn’t apply to all hotels and restaurants, but the situation needs to be changed.

As Dr Aslanov noted, a number of five-star luxury hotels, like the Four Seasons, Hilton, Hyatt Regency, Kempinski and Marriot, have opened in Baku; they meet international standards and attract tourists from around the world. However, those hotels mainly serve the better-off, especially top-level businesspeople. For other, let’s say ordinary, tourists, who discover countries at their leisure, affordability is a higher priority than luxury. Good service and good food at a good price – that’s all that the average tourist needs. 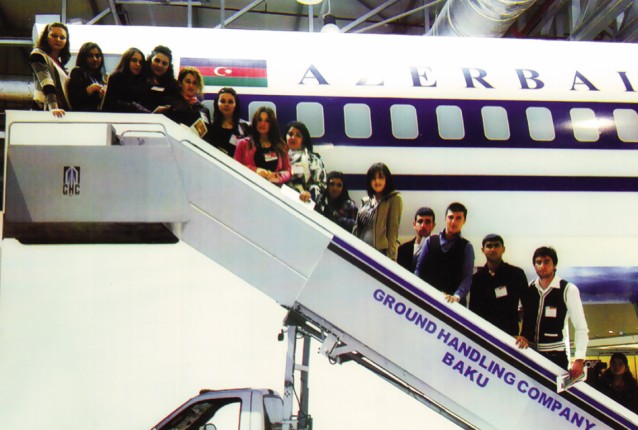 We hope that the situation will change soon. We live in a time of market relations, when only the strongest survive. Sooner or later this axiom will be accepted, for if you have good conditions but bad service, you will not stay in business very long..
The Tourism Vocational School is fortunate, said Jamalatdin Akhundov. Its students have no problems in getting practice in the private sector and opportunities to work there after graduation.
Our travel agents, waiters, barmen and chefs – usually do their practice in various state and private facilities. Our school is well known and respected; and this gives our students a green light. But I can’t say the same about other vocational schools. As I understand, many students there have problems in getting practice. The main reason is that company owners prefer to hire their relatives on low salaries, even if they are untrained, rather than young professionals striving for good conditions.


The client’s wish is our command!

Indeed, it takes time to meet all the criteria of a successfully developed vocational education, especially in the tourism sector. This is a question not only of budget, but also of the will to implement change. A plan for the creation and development of vocational schools has been adopted for 2012-2016 and gives hope of such change. As Dr Aslanov says, the world changes and we should adapt accordingly.
I hope everything necessary will be done within this plan. You see, every day new directions are developed in tourism. Whereas people used to travel around the world enjoying the most expensive resorts, now they are ready to pay to have untamed experiences. We need to keep abreast of clients’ wishes.
Latifa Sadigli, a third-year student from the travel agency group is optimistic about her future career. She thinks that knowing foreign languages and having appropriate skills for a tourism agent she will be successful.
I am sure there are job opportunities in my speciality. You just need to work hard and prove yourself to be a valuable member of staff. I am not working yet, but trying to learn English well and acquire more skills from practice in the tourism sector. I need to be communicative and convincing; I’m sure I will succeed!