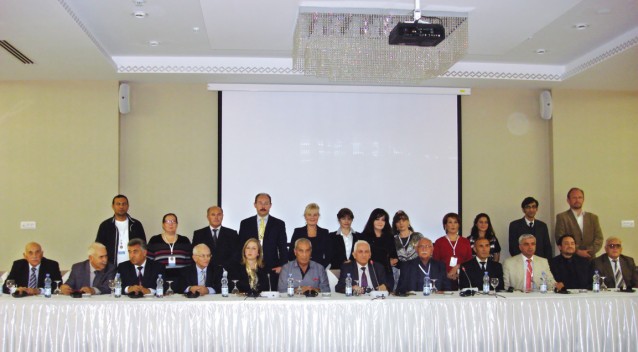 The opening ceremony of the International Scientific Conference, On Ancient Township-Urban Culture of Azerbaijan
Archaeology in Azerbaijan is enjoying a renaissance. Research and excavations, which came to a halt with the collapse of the Soviet Union, have resumed in recent years at sites across the country. ‘We’re returning our history,’ Naila Valikhanli, vice-president of the Azerbaijan National Academy of Sciences, told a major conference in Qabala in November.
The international conference, On Ancient Township-Urban Culture of Azerbaijan, heard about the newest finds in excavations of ancient and medieval cities and debated the latest theories about the development of urban culture in the wider region. The conference was organized by the Azerbaijan National Academy of Sciences, its Institute of Archaeology and Ethnography and SEBA (Seoul-Baku), the Azerbaijan-Korean Cultural Exchange Association.

The first towns, as opposed to simple settlements, are thought to have been built in the fourth millennia BCE in Mesopotamia, an area covering modern-day Iraq and parts of Syria and eastern Turkey. These towns or proto-towns were not just settlements, but planned urban structures with administrative buildings. From Mesopotamia, towns spread to the Caucasus, where they began to appear in the 2nd millennium BCE, Rauf Munchayev of the Russian Academy of Sciences’ Archaeological Institute told the conference. The influence of Mesopotamia in Azerbaijan can be seen in sites in Nakhchivan in the south-west of the country, and between the Araz and Kur rivers, a steppe area similar in geography to northern parts of Mesopotamia.

The understanding of the ancient town is changing. This idea was a thread running through much of the conference. The first towns were not so much trade centres, as religious and administrative ones, Rauf Munchayev said. He cited the example of the Neolithic proto-town of Çatalhöyük in Turkey, where evidence of more than 40 temples has been found. 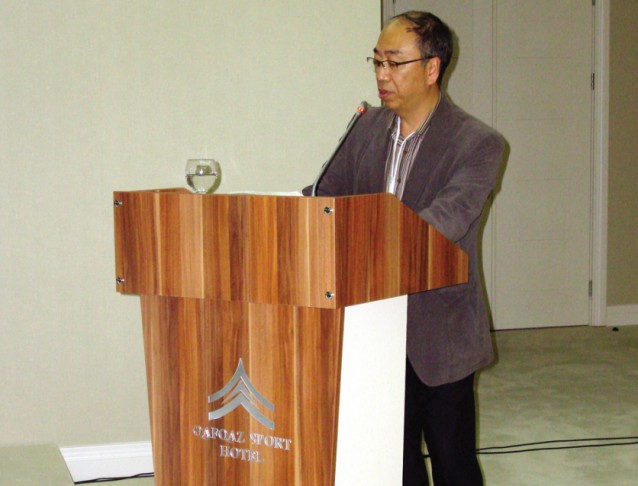 Çatalhöyük also influenced the emergence of towns in Nakhchivan, Abbas Seyidov of the Azerbaijan Academy of Sciences’ Institute of Archaeology and Ethnography told the conference. As tribes began to unite in the Bronze Age, they formed settlements and, later, towns with urban life taking its place alongside pastoralism and nomadism. Examples of early urban culture in Nakhchivan can be found at several sites including Sumbatan-Diza, Oglanqala, Shakhtakhti, Kultepe and the city of Nakhchivan. 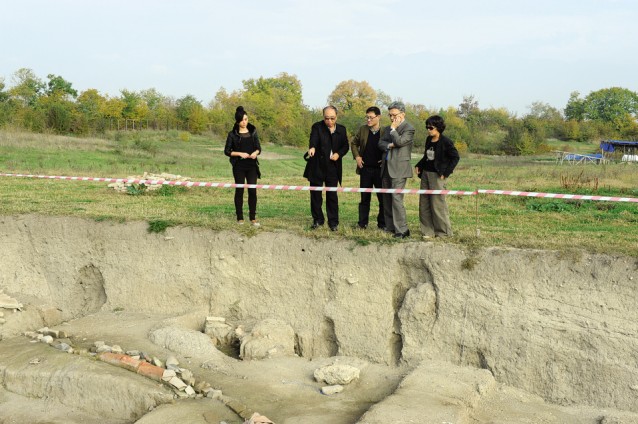 
The Iron Age fortress of Oglanqala is being studied by a joint American-Azerbaijani team as part of The Nakhchivan Archaeological Project. Since 2008, the team has held five seasons of excavation and surveys, Vali Bakhshaliyev of the Nakhchivan Department of the Azerbaijan Academy of Sciences told the conference. Presenting a joint paper written with Lauren Ristvet of the University of Pennsylvania and Safar Ashurov of the Azerbaijan Academy of Sciences’ Institute of Archaeology and Ethnography, Vali Bakhshaliyev said the research at Oglanqala provided an important counterpoint to research into the development of cities in Mesopotamia. The cities of Nakhchivan and the Caucasus as whole presented a challenge to the empires of Mesopotamia and, later, Persia and Rome.

A capital city of the early medieval state of Caucasian Albania, Qabala was an apt choice of location for a conference on the development of urban culture, Naila Valikhanli, vice-president of the Azerbaijan National Academy of Sciences, noted. Archaeologists working in Qabala this year have achieved the best results since the 1960s and 70s, she said. Several conference papers were devoted to work at Salbir and Qala, two different locations of ancient Qabala, in the foothills of the Caucasus, just under 200 kilometres west of Baku. Leading South Korean scholars are working with their Azerbaijani counterparts on the excavations at Salbir. This year’s joint expedition confirmed that Salbir dates back to classical antiquity, Yi Seon-bok and Kim Jong-il of Seoul National University noted in their paper. While Salbir has remains from the Middle Ages, the presence of an ancient layer beneath the medieval layer has been established. The further back in time archaeologists delve, the more help they have from cutting edge technology. The Koreans used AMS or Accelerator Mass Spectrometry, a method of radiocarbon dating that requires much smaller samples than standard radiocarbon dating, and ground-penetrating radar scanning (GPR) to date their finds.

The decorations on artefacts found at the site show evidence of east-west cultural exchange in Salbir, an exchange continuing today through the involvement of Korean archaeologists. The Joint Korean Salbir Excavation Team, which made its first expedition in 2009, is the brainchild of SEBA (Seoul-Baku), the Azerbaijan-Korean Cultural Exchange Association. The Republic of Korea’s ambassador to Azerbaijan, Choi Suk-inn, thanked the association for their work in his address to the opening of the conference. 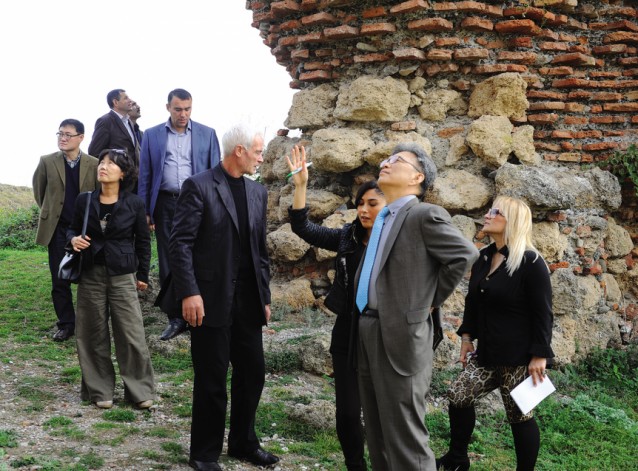 At the gates to medieval Qabala

Archaeologists are studying not just the development of ancient towns and cities, but medieval ones too. Excavations at medieval Shabran, some 120 km north of Baku, resumed this year after a 20-year gap, Qoshqar Qoshqarli of the Institute of Archaeology and Ethnography told the conference. Azerbaijani President Ilham Aliyev called for the renewal of work at Shabran in 2011 as part of the Year of Tourism. While work is continuing, the site is also to be open to the public. Archaeologists have pinpointed the location of the city’s narinqala or citadel and found an area of several stone ovens which formed a bakery district. The bakeries supplied passing caravans with bread. The team has also found that the houses had no northern windows, which is typical of dwellings in the Kur and Absheron areas, and that the city did not have a defensive wall.

Founded in the late 5th and early 6th centuries during the rule of Sassanid Iran’s Khosrow Shah Noshirvani, Shabran grew into a trade and craft centre on the north-south trade route. It was abandoned in the 18th century after an uprising against Safavid rule. Haji Davud’s forces burnt down the citadel after it failed to support the uprising.

The archaeological team investigating Shabran is keen to dig deeper in their excavations down to the 6th century, although the regional authorities do not want the top layer of excavation to be destroyed as it makes a fascinating tourist site. A compromise is likely to be found with the archaeologists choosing one section for further excavation.
Archaeology today 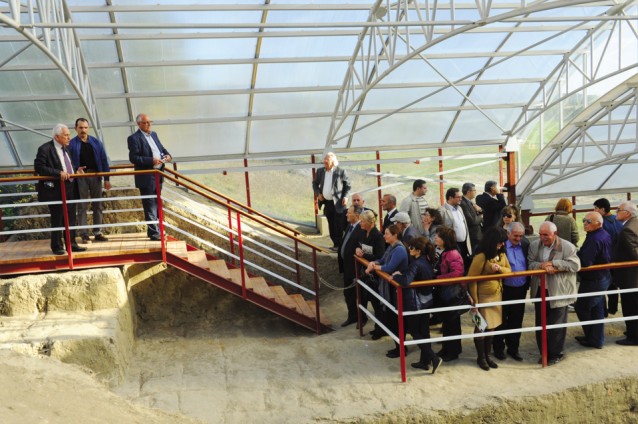 A visit to the northern wall, Salbir

The conference heard reports on continuing excavations at other sites in Azerbaijan, both ancient and medieval, including Qala - one of the locations of Qabala, Qalatepe in Agjabadi District and Qalakend in Gadabey District. The Azerbaijani word qala means fortress, hence its appearance in so many place names.

Addressing the opening of the conference, Mahmud Karimov, president of the Academy of Sciences of Azerbaijan, said that the academy has been upgrading the equipment of the Institute of Archaeology and Ethnography. Echoing his words, the director of the institute, Mais Rahimov, noted that President Ilham Aliyev has allocated substantial funds from the Presidential Reserve to the development of archaeology. That the investment is already bearing fruit is evident in the variety of research presented at the conference.