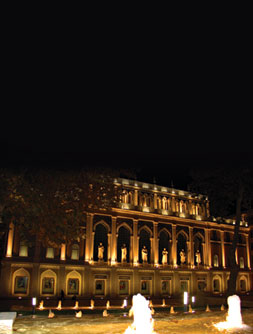 A nation’s cultural values tell you much and attitudes towards those values are no less important. They can be lost, buried, hidden, even deliberately destroyed, and still be salvaged, given a second life and returned to the people. Azerbaijan is increasingly known for its rich cultural traditions and the huge variety of museums and other cultural spaces certainly indicates local attitudes towards those cultural values.

In this piece we would like to focus on the nation’s literary traditions which have produced literary landmarks from poets of genius over the years: Nizami Ganjavi who with his Khamsa [Five poems – ed.] exerted a profound influence on world literature as well as founding a school of literature which has lived on for over eight centuries; the Hurufist Imadeddin Nesimi who was cruelly tortured and put to death for his words and beliefs; Mirza Fatali Akhundov the founder of modern drama here and catalyst for the development of equally modern thought, not only in Azerbaijan but also in Turkey, Iran and Central Asia; and dozens of other Azerbaijani poets and writers famed in the Eastern world. Literary and historical sources list nearly 4,000 poets and writers as creators of the nation’s literary heritage. The Nizami Ganjavi National Museum of Azerbaijani Literature is a shrine connecting the classics as well as being an enthralling collection illuminating the path of literary development.

There are indeed many literature museums in Azerbaijan, the majority concentrated in the capital, Baku, and the network has been greatly expanded and improved since the 1970s. The old ones being reconstructed and new ones opened. Thus museums dedicated to Azerbaijani poet Samed Vurghun and Azerbaijani composer and writer Uzeyir Hajibeyov were created in 1975. Two years after this the museums of the known musician Bulbul, dramatist Jafar Jabbarli and political activist and writer Nariman Narimanov were established. Opened in 1982, a Centre for the Scientific Restoration of Museum Treasures and Relics still supports the network. That was all during the Soviet era. Before the 1970s museums in Azerbaijan were not as good as they should have been, comparing unfavourably with other Soviet republics. However, from then onwards, and especially during the last 20 years, the situation has been improved. Despite the turmoil of the post-Soviet transition not one museum was closed and some 20 new museums have opened since independence. Among them are: The House-Museum of Leopold and Mstislav Rostropovich, The State Carpet Museum, the Museum of Jalil Mammadguluzade (Azerbaijani satirist and writer), The House-Museum of Huseyn Javid (Azerbaijani poet and playwright) and so on. 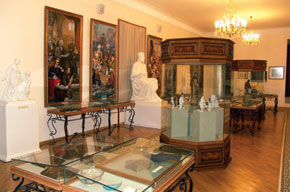 The Nizami Ganjavi National Museum of Azerbaijani Literature could be regarded as the leading light with its own particular history and development. It was established by Soviet Azerbaijan on the occasion of Nizami’s 800th anniversary in November 1939. The opening of the museum to the community was due to follow a great deal of preparation work in 1941. But the Second World War intervened. The doors were finally opened to visitors only in 1945, five days after victory on 9 May. The museum contained a wide range of exhibits and documents presenting Nizami’s life and work as well as his historical environment. Over the years its collections have been significantly enlarged. By 1967 it had developed into the current National Museum of Azerbaijan Literature. Housed in a building of unique construction with a turquoise majolica facade and sculptures of the most outstanding Azerbaijani writers within a loggia, the Nizami Museum is now a Baku landmark.

The tale of a single-storey caravanserai.…

Rafael Huseynov, Director of the Nizami Museum related a very interesting story about the building which houses the museum. Now standing in the very centre of Baku, in the year 1850 it was being constructed as a single-storey caravanserai on the city’s outskirts. Baku then consisted of Icheri Sheher (inner city), surrounded by fortress walls. This venerable building, which used to greet and see off caravans and guests has, with the astonishing logic of history, once again become a connection point for cultures as well as a permanent home for its ‘guests’.

In the late 19th century the building was extended upwards. A project led by Qasim bey Hajibababeyov, who was chief architect of Baku province from 1858-1868, converted the caravanserai into a two-storey building. Again, in 1915, the building was reconstructed. Haji Hajiagha Dadashov, one of Baku’s well-to-do and new owner of the estate, converted the building into the hotel Metropol. This gradually became a favourite entertainment haunt, not only for hotel guests but also for the Baku elite. The ground floor of the building provided outlets for jewellery and various fancy goods. 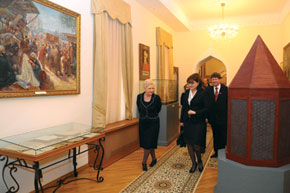 The building’s long biography contains some tragic pages too. The Armenian massacre of Azerbaijanis in March 1918 was aided by machine-guns installed on the building which were used to sweep and fire at the streets below. It’s an interesting fact that, representatives of the first Azerbaijan Democratic Republic lived and worked there between 1918 and1920. After the republic fell to the Bolsheviks, it housed the soviet of Azerbaijan’s Labour Union from 1920 into the 1930s. Finally, following reconstruction work designed by architects Sadig Dadashov and Mikayil Huseynov, the building became home to the museum in 1939.

That year, 1939, plans were initiated for a 1941 celebration of 800 years since the birth of the great Azerbaijani poet Nizami Ganjavi. The plans included the establishment of a separate museum dedicated to the poet’s life and work. So, the most skilful artists, draughtsmen, masters and literary and art critics were involved in the process.

The reconstruction was an extensive one: two more floors were added to the building and the windows in the facade on one side were removed and an arched loggia was installed. Statues of Muhammad Fuzuli, Molla Panah Vagif, Mirza Fatali Akhundov, Khurshidbanu Natavan, Jalil Mammadguluzade and Jafar Jabbarli – six great pioneers of Azerbaijani literature stand proudly under the arches facing the monument to Nizami.

So 160 years after its foundation, the former plain and unobtrusive single-storey caravanserai is now an attractive four-storey architectural jewel.

A walk through space and time

Decades after its makeover into a museum, further inspiration was applied to breathe new life into this handsome building. As Rafael Huseynov described, a fundamental programme of repair and reconstruction of the museum began in 2004.

The building was totally refreshed from the foundations to the roof, all the decorative elements were renewed and central heating-cooling and air-conditioning systems were installed. The museum was totally computerized and the displays constructed by applying the latest technologies to meet the requirements of the modern museum

The development of Azerbaijani literature from the most ancient of times to the present is displayed in the museum. Thousands of manuscripts, rare books, writers’ memorabilia, portraits, statues, illustrations, miniatures, art works and other exhibits are exhibited. 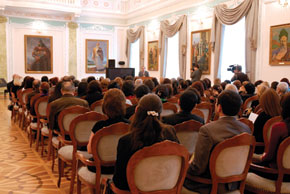 When the ribbon was cut to formally open the museum in 1945, there were a mere 213 manuscripts, 200 books printed by lithography, 152 excavated materials and 424 works of art. Currently the museum holds over 100,000 exhibits.

Most of the displays are to be found on the second and third floors. Walking round the second floor the exhibits you see pertain to the Azerbaijani classics like Nizami himself, Fuzuli, Nesimi, Natavan and others. There are decorated and glazed vessels discovered during archaeological excavations carried out in Azerbaijani towns, material found in Nizami’s grave, diminutive manuscript Divans [lyrical, symbolic poetry – ed.] by classical Azerbaijani writers, a handful of soil taken from Nesimi’s tomb, examples of Fuzuli’s handwriting, a ‘bulletproof’ shirt worn by Panahali khan (founder of Shusha city) decorated with verses from the Qur’an, fine needle-work by Khurshidbanu Natavan and chess-men from the chessboard presented to her by Alexandre Dumas.

The third floor is devoted to the modern period: Academician Alimardan bey Topchubashov’s tombstone brought from his burial place in Paris, Mirza Jalil’s kamancha, a clock from the editorial office of the Molla Nasreddin magazine, pens, writing materials, examples of handwriting, letters belonging to Nariman Narimanov and other activists. There is a tar belonging to Azerbaijani poet Mikayil Mushvig who had cried Sing, tar, sing, and paid with his life. In the hall dedicated to the epic Kitabi Dede Qorqud there are pages from manuscript copies (preserved in the Vatican and Dresden) of the Azerbaijani oghuzname [book of the Oghuz – ed.] which is 1,300 years old and maps of Azerbaijani lands inhabited by heroes of the epic. There is also a separate corner dedicated to the great 12th century astronomer and poet Nasreddin Tusi with some of his astronomical instruments.

As well as the objects immortalizing the memories of the great poets and writers, even the museum’s walls breathe history. They are hung with the works of medieval Azerbaijani artists and carpets illustrating the literary epics. Busts and sculptures are created by artists of the rank of Pinkhos Sabsay, Ibrahim Zeynalov, Omar Eldarov and others. Monitors in the galleries allow visitors to take free audio-visual trips through literary history. The museums highly professional guides conduct tours in Azerbaijani, Turkish, English, Persian and Russian.

The golden age of Azerbaijani literature

The 12th century was a golden age of Azerbaijani literature, characterized not only by the great philosophical wordsmiths like Nizami Ganjavi, who was in his day hailed as the sun of the world of verse, Khagani Shirvani and Mujiraddin Beylaqani, but also by a rare and endearing literary phenomenon in that period, an assembly of women poets headed by Mahsati Ganjavi. 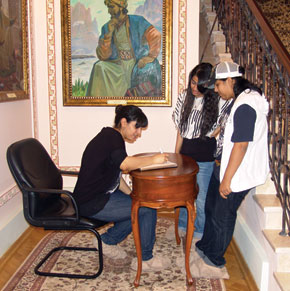 There is a painting of her, by artist Oqtay Sadigzade, in the museum showing Mashati Ganjavi beside Lake Goygol with five of her sister-poets. Another group of five in the museum always brings the visitor to a halt for long minutes. This is a decorative carpet created by Latif Karimov, Gazanfer Khaligov, Kazim Kazimzada and Amir Hajiyev in the mid 20th century and dedicated to the Khamsa. The Owls’ Dialogue from the story The Treasure House of Mysteries, Farhad Cleaves the Mountain from Khosrov and Shirin, Geys among the Beasts from Leyli and Majnun, Bahram and Fitna Hunting from Seven Beauties and Iskendername [Book of Alexander the Great- ed.] are unique and beautiful examples of Azerbaijani carpet-weaving. There is much more of interest to be seen in this museum directly facing the monument of the great Nizami and his immortal phrase:

If you ask one hundred years later:
“But where is he?”
Each of his couplets will cry:
“He is here and here!”