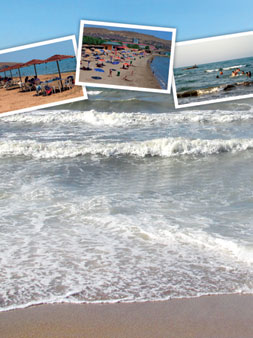 The beach season is underway again; for many this is the end of an impatient wait. This year, as always, the silence on Baku’s beaches was broken at the beginning of June. The susurrations of the Caspian Sea seduce once more a stream of sun worshippers. The fact that the sea washes 825 kilometres of Azerbaijan’s shores, from the border with Russia to Iran, represents a great opportunity for beach tourism, not least for the consequent income. This section of the Caspian is great for seaside holidays; the beach season continues until October and so it is possible to tan and swim for 5 months of the year, with sunshine practically guaranteed. Even the winters are temperate and the waters never freeze; from a typical 13oC in winter, temperatures rise to 25-30oC in summer. The beaches lining the Absheron peninsula are within easy reach of Baku city and are very popular with tourists. The developing facilities – good roads and highways, a variety of hotels and resorts, the fine, sandy beaches and the nearby international airport – make the area a natural resort for both locals and foreign visitors seeking rest and relaxation.

The sand on the Absheron beaches is also therapeutic; it is used in the treatment of many ailments. The Caspian Sea is truly a peerless resource, with its mineral, organic and recreational facilities. And if you venture further, to the country’s north-eastern coastline, the beaches in the Yalama-Khachmaz area (220 km. north of Baku) have the added attraction of being bordered by luxuriant forests.

As a first-time visitor, the Absheron beaches you should at least investigate are in Novkhani, Pirshagi and Bilgah on the northern coast of the peninsula; Zagulba, Buzovna, Mardakan and Shuvalan in the north-east, and Hovsan, Shikhov, and Sahil beaches to the south. You will find many modern pensions, cottages and recreation centres.

The rise and fall of an exclusive beach 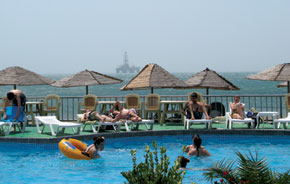 During the Soviet era every summer saw a huge influx of tourists to Buzovna, Zagulba, and Mardakan; they came from all the republics seeking the sand and sea around the many health resorts. Zagulba’s beaches also welcomed visitors from the socialist countries of Eastern Europe. The question arises: why Zagulba?

The fact is that the USSR’s political regime did not encourage any contact between local people and foreigners. Of course this block applied mainly to tourists from capitalist countries. Thus foreign tourists visiting Baku in those days were only allowed to use the beach in Zagulba which belonged to the Intourist company. Local people were kept off the beach by metal fencing. The State Security Committee ensured that nobody could impinge upon the visitors.

I remember that the locals used to envy the high level infrastructure on the other side of that fence. At first we could not believe that it was possible to create a green area so near the sea; it really was a little oasis. The beach beyond the oasis, used by the ordinary Soviet citizen, was distinctly monotonous. The main services then were provided free of charge: from umbrellas and tables to the shower cubicles. However, as services were a state monopoly they could not be described as high level. Following the collapse of the Soviet Union and a rise in the level of the Caspian in the early 1990s, this famous Intourist beach was consigned to history and the waves.

Once Azerbaijan had restored its independence, the foundations were laid for a new economic system and the progressive ideas emerging from the market economy did not bypass the business of beach tourism. The mid 1990s saw work begin to install infrastructure on Caspian Sea beaches and to refurbish them to European standards. Each of the Absheron beaches has its own attractions, while some still require improvement. 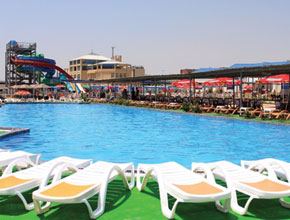 The sea at Novkhanı, Pirshagi, Nardaran, Bilgah, Zagulba, Buzovna, Mardakan, Shuvalan, Hovsan and Dubandi is safe for swimming. The Ministry of Ecology and Natural Resources has confirmed that no sewer-pipes drain into the sea at Bilgah, Buzovna, Mardakan, Pirshagi and Nardaran; this also applies to the Amburan beach and Novkhanı and Jorat seashores, with their summer cottages. 16 local waste water treatment plants which comply with international standards have been installed at these beaches.

This is one of the elite beaches on the Absheron peninsula, in Bilgah settlement, 44 km from Baku city centre. Great swimming pools, high quality service and a clean beach are not the only attractions. A range of entertainments is also on offer, including a cinema, jet skis, karaoke and bar. The entry fee includes the provision of sun loungers, changing room and shower.

One of the city’s most popular beach complexes is situated in Shikhov settlement, 9.5 km from the city centre. Unlike many beaches, it is very well equipped. There is shade, multiple attractions, a bar etc. in the huge square. The complex also includes three big swimming pools and one for children. This beach is one of the cleanest on this shore. There are tables under beautiful shades, sun loungers around the pools and other equipment.

We should add that the Shikhov beaches are closest to Baku. A bus from Icheri Sheher (Inner City) can get you there in ten minutes. Thus the beaches are very popular.

This park is in Novkhani settlement 21 km from Baku city. It is a family entertainment complex on the shore of the Caspian Sea. There are four swimming pools with water slides, an open tennis court, skating rink and gym, as well as pitches and courts for football, volleyball and basketball. 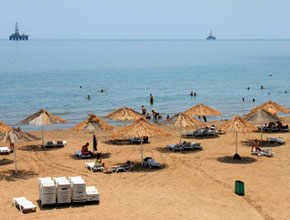 The water at Novkhani has officially been declared clean, the beach is flat with a gradual incline into the water, so there are several metres of shallow water and you will not suddenly find yourself out of your depth. You decide whether to swim in the shallows or the deep.

9.5 km. from the centre of Baku at Shikhov, this beach is next to the well-known hotel, is very clean and offers high quality service. The sea off the 400m. long beach has a safety cordon, one more benefit in addition to the many attractions. The complex offers a wide range of services: changing rooms, shower rooms, a tennis court and basketball court, swimming pool, fitness club, hot whirlpool, sauna and table tennis.

One of the most important developments on the beaches in recent years has been the introduction of lifeguards. Previously only seen at paid-access beaches, they are now on all of them. They are also proactive in offering advice about the rules for proper and correct behaviour near the sea. Information signs have also been renewed or replaced by more attractive ones. Unfortunately, we can still see people disregarding advice and swimming behind ‘No Swimming’ notices. We can even encounter small children swimming away from their parents.

Safe swimming in the sea requires the observation of just two main rules: being able to swim and staying away from prohibited areas. Incidents of drowning occur mainly in uncontrolled areas far from the beach.

Assuming that the presence of lifeguards has increased control over these areas, the forecast is that this year the number of drownings will be far fewer than in previous years. The guards have also offered advice about how to save someone in difficulties in the water: 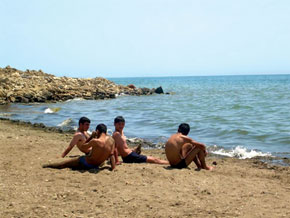 First, it is important to expel water from the victim’s breathing passages and lungs as soon as possible. To do this, the first aider should kneel on one knee and place the injured person so that his/her head and chest are lower than the rest of the body. Only then should the first aider slap the victim’s back to expel water from the lungs. The victim should then be turned onto his/her back.

Currently, 42 rescue stations, posts and search teams, with more than 400 personnel and more than 200 items of rescue hardware and equipment, operate within the State Water Rescue Service of the Ministry of Emergency Situations and will be active in rescue operations.