The Precinct: A Modern Classic of Azerbaijani Film 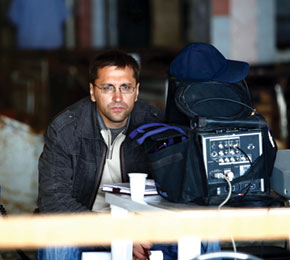 My interest in the Azerbaijani film The Precinct was piqued when I learned that it had been long-listed for an Oscar. This was announced ahead of the 83rd Academy Award ceremony in 2011. I was thrilled that my country was being considered for this prestigious award, even though several years earlier Farida Humbatova’s film Caucasus had also been nominated.

Thus, I was anxious to see the film for myself. Unfortunately it was in the cinemas for a mere week but I learned from the director that DVDs would soon be available…

Watching the film, I was struck by how far cinema in Azerbaijan has come. The sheer technical virtuosity of the film was impressive. The quality of the picture and sound were on a par with international blockbusters and certainly would be acceptable to a western audience. With proper marketing, this film has the potential to achieve real commercial success.

Azerbaijani film-making dates all the way back to the 19th century. Since that time, around 240 full-length feature films have been made. This is an immense achievement in and of itself, but all the more when one considers the fact that after the disintegration of the USSR there was a serious shortage of equipment for film-makers. However, things are certainly improving. In the past decade the Azerbaijani film industry has grown rapidly. This film is evidence of just how far it has come.

Awards won by The Precinct

• Gold Medal from the 2011 California Film Awards
• Actor Timur Odushev was a winner, Best Performance in an International Feature Film, at the 32nd Annual Young Artist Award (USA)
• Jury’s special prize at the Golden Eye Festival of Cameramen (Georgia)
• Award For a Successful Debut in a Full-length Feature Film from the 11th International Film Festival (Tbilisi)
• Best Camera Work from the 2nd Truskavets Festival (Golden Pektoral)
• Diploma from the Moscow City Authority at the 15th Forum of National Cinematographers for a Contribution to a Culture of Dialogue and Mutual Understanding between People.
• A Golden Aphrodite award for best male role at the 6th Cyprus International Festival

The Precinct cannot be called a commercial film. Yes, it was designed for a broad audience, but its message is subtle and will appeal to viewers in different ways; it can be appreciated on many levels and by a diverse audience. From this viewer’s perspective, it seems to be a satire on modern lifestyles and values. The film contrasts our current status with the primordial wisdom of our ancient ancestors. 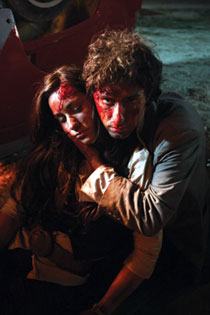 Garib and Sabina in trouble

Some facts about the film:
• It was a collaborative effort between the Narimanfilm film studio in Azerbaijan and the Georgian studios Georgiafilm and Bagirasfilm.
• The film was shot with financial support from the Ministry of Culture and Tourism of Azerbaijan and with the assistance of PASHA Bank.
• It was shot on 35 mm motion picture filmstrip.
• The script was prepared during a training programme organized by the Independent Filmmakers´ Association – South Caucasus (IFA-SC).
• Shooting took place from 16 September to 25 November 2008.

The storyline is deceptively simple. The hero, Garib, is a famous photographer; his girlfriend, Sabina, is an artist. They are engaged to be married and the wedding date has been set. The pair take a trip to Gobustan, the site of Azerbaijan’s renowned prehistoric rock carvings. They have a quarrel because Garib wants to postpone the wedding in order to accept a work offer. The squabble results in a terrible car accident, in which Sabina is badly injured. This is the basic plot.

But here, things take a new direction. Police find the injured couple and take them to a police station, the Precinct. The police chief has a long talk with Garib. This confrontation causes Garib to have a flashback to his childhood. He recalls his childhood hobby of photography and his early love affair with a woman, Alina, who worked at a grocery shop. He recalls how he was compelled by local hooligans to film pornography and how this eventually led him to consider suicide. Garib is forced to confront many truths about his past and to recognize where he has gone wrong. Then, just as suddenly, we are back at the scene of the accident. Garib comes to and sees the policemen, only this time they take the injured to a hospital.

The characters in the film are very well developed and hold the key to the psychological appeal of the story. Garib, the stylish young photographer, is earning a good living and enjoying life. This scenario may be rare in Baku, but is not unheard of. Garib is a lady’s man. He is inclined to use alcohol and drugs. He is a complex guy, at times depressive but also courageous. But his inner world is locked away, hidden from everyone he knows. One gets the impression that he has dark secrets that he cannot share but also cannot sort out by himself.

Sabina, in contrast, seems uncomplicated. We see her as a normal young woman, excitedly making plans about the future wedding with her mother. But she too has her secrets.

The precinct chief as a strange and mystical quality about him. He possesses knowledge that one would not expect from an ordinary person. He seems to personify some higher order of justice which pushes Garib to admit the mistakes of his past. At the same time, he is portrayed as a regular person who has his own problems and work to absorb him. 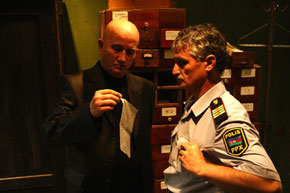 The setting contributes in no small way to the central message of the film. Gobustan is a symbol of ancient Azerbaijan. It places the action at a site of sacred ceremonies and ancient rituals that have a reality of their own, a mysterious energy and force. The Precinct, on the other hand, is cold and secular. It represents a modern code of laws and rules that are without emotion or mercy.

The ancient site of Gobustan places the film firmly in Azerbaijan, but so too do the images that immerse us in the Soviet era: the local criminal eternally playing nard (backgammon), children at the seaside, the old Jewish photographer teaching his art. All these images recall Soviet Azerbaijan. Historical elements are included to show us images of communism, the development of photography and cinema in Baku, and the oil boom era. Added to this are many references to national symbols and cultural relicts: the shamanism of Gobustan, the worship of Humay (the mother goddess of the Turks), the cult of woman and fertility, and the many proverbs that are interwoven throughout the plot. These are used by the director to show how ancient knowledge still influences the present.

Basically the whole film is about how Garib is released from the problems of his childhood. The film suggests that the process of purification is helped along by the sacred land of his ancestors. Most people watching this film will come away with the idea that an ancient force from the land itself has, in some mysterious way, exerted influence over Garib’s fate.

At the core of the film is the idea that the man is aware of his own problems but runs away from them, although only he is capable of solving them. Thus the film is a step-by-step resolution of the main character’s psychological problems. An important theme is Garib’s attitude to women. His early love of pure beauty is destroyed by the debauchery he witnesses early in his life. As he accepts this lewd behaviour he chooses to ignore the better side of his own character. But there comes a time when he has no choice but to face facts and see his past for what it was.

Art house films are often difficult to interpret. Audiences can have widely varying ideas about the meaning of these films. However, this film does not confuse. The main concept is clear. One further exception to art house films is that it is action-packed, with the big flashback scene in the middle. It rivets one’s attention for the full two hours. 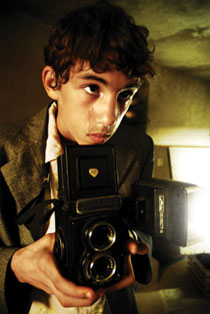 The young Garib learns his trade

We haven’t said a word yet about the director, Ilgar Safat. His approach to film-making is classical, with his own vision and innovation helping to lift the old ways to new heights. Ilgar graduated from the philological faculty of what is now the Baku Slavic University in 1995. He has written for newspapers and literary magazines in Baku. He is also a songwriter and performer who has appeared before audiences in Baku and Moscow. He received his postgraduate training as a film director in Moscow. He is currently the director of the Narimanfilm company. I met up with this director and scriptwriter to ask him about his film.

Muhammad: Nobody has tried before to represent the esoteric and mysterious side of Azerbaijan to a wide audience through the cinema. Is this something like Carlos Castaneda elucidating the ways of American Indians? Can people become interested in our cultural traditions in this way?
Ilgar: Certainly, we should use the cultural elements that we possess. Everyone does this in different ways. For me, it is simply my passion. I have studied our cultural roots for many years and this is reflected in my film. It is important to popularise our aesthetics and traditions. There is no reason to become isolated. This is not just for internal consumption.
Muhammad: What is the basic idea behind The Precinct?
Ilgar: What does ‘basic idea’ mean? I am simply interested in the nature of human consciousness and am trying to ask some questions to which everyone will find their own answer (if they want to, of course).
Muhammad: All the same, your film is more art house. Is it self-expression or an objective vision?
Ilgar: I aspire to find something ordinary, not to lie, not to myself or to others.
Muhammad: Your images, are they invented or do they really exist?
Ilgar: Somehow or other, all the images are alive. Where they live is another matter. My own idea for this film came to me in a dream.
Muhammad: What is the film’s future?
Ilgar: It is planned for release on disk and then, I hope, for re-release at cinemas.

Do I have any criticisms of the film? Purely from my own perspective, I’ll mention two. First, some of the scenes seem to be played too expressively, losing their vitality and becoming, instead, artificial. Second, certain situational turns seem unnatural. For those unacquainted with our local culture, this artifice may be charming; it is hard to say. But overall, the film has all the elements necessary to compete internationally. It possesses an original, mythic atmosphere that will thrill movie-goers. In short, it is a must-see!