Angling on the Increase and Aquaculture the Way Forward 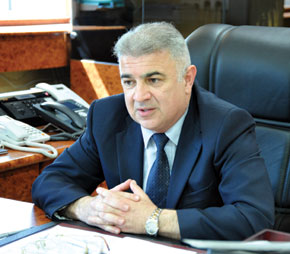 VoA: Last December, Baku hosted the 32nd meeting of the Commission on Aquatic Bioresources of the Caspian Sea, during which there was discussion about fishing quotas, the protection of biological resources, the ban on industrial fishing of sturgeon among other issues. How has the meeting affected the current situation of living aquatic resources in the Caspian Sea?

Deputy Minister Hajiyev: Along with regular Commission business, i.e. a report on the reproduction and conservation of fish stocks, the agenda also included the status of stocks of valuable commercial fish, including sturgeon, decisions on commercial fish catch quotas for each country for the coming year, and the moratorium on commercial sturgeon fishing adopted by the Presidents at the summit meeting of Caspian states in Baku in 2010. Agreement was reached on all matters, but a special permanent working group was established to develop a 5-10 year international agreement on the sturgeon fishing moratorium. The Commission refrained from setting commercial catch quotas for sturgeon pending the agreement.

VoA: The situation with sturgeon is of special interest... Is there a moratorium on catching fish in Azerbaijan and if so, how is it regulated in law and in practice?

Deputy Minister Hajiyev: Azerbaijan unilaterally introduced a ban on commercial fishing for one of the valuable species of sturgeon – Spike - in 1979, followed in 2008 by a ban on fishing for Beluga. Thus, Azerbaijan unilaterally refrained from catching two of the four species of sturgeon for several years. The Spike was entered into the republic’s Red Book and Azerbaijan informed the Secretariat of CITES (the Convention regulating international trade in endangered species of wild fauna and flora) about its decision. In 2011 we stopped all commercial fishing for sturgeon.

VoA: What are the stock levels for sturgeon in the Caspian Sea today, and what proportion of those stocks lies within Azerbaijani waters?

Deputy Minister Hajiyev: Sturgeon stocks have been greatly depleted in the Caspian Sea over the past decade; they are now one thirtieth of the stocks existing in the 1980s and are almost commercially unviable. The main reasons for the sharp decline were overfishing in the 1980s and 90s, the lack of regulation on nearly all spawning rivers, pollution, the lack of a unified system of fishing regulation for the Caspian Sea and, finally, an invasion of mnemiopsis leidyi, [a predatory species of jelly fish – ed.] brought in the ballast waters of ships sailing from the Black Sea to the Caspian via the Volga-Don system. Within just a single decade this invader destroyed almost all the Caspian’s zooplankton, affecting the whole food chain. Sturgeon stocks in the Azerbaijani sector of the Caspian Sea, some 12-15 per cent of the whole stock, were equally affected.

VoA: How is the state tackling the problem of regenerating this fish? 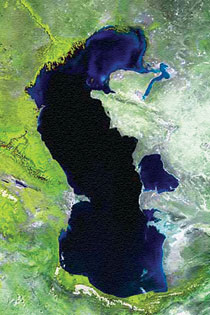 Deputy Minister Hajiyev: Azerbaijan has four state sturgeon hatcheries; the latest was opened in 2003. They used to introduce up to 20 million young sturgeons annually into the Caspian Sea. With the erosion of reserves in recent years, numbers fell to no more than 3-5 million fry. Thus factory-based development of breeding stock was initiated and there is now a stock of 1-7 year-old fish, which reduces the reliance on nature. This will raise fry production to 20 million and in the future a capacity of 30 million is envisaged. At the same time, work continues on the rehabilitation of the Kur delta to restore the sturgeon’s migrational route to its spawning grounds. Together with the Interior Ministry, Border Security and the Ministry for Emergency Situations, we have launched a comprehensive, collaborative effort to strengthen anti-poaching work.

VoA: Could you tell us about the work of the Fisheries Scientific-Research Institute?

Deputy Minister Hajiyev: The Azerbaijan Fisheries Scientific-Research Institute was established in 1912 and was the first such research centre in Azerbaijan. The Institute’s objectives are: the assessment and management of sturgeon stocks; ichthyology; the reproduction of fish stocks; commodity farming, forage (macrozoobenthos, plankton) and food fish evaluation (sturgeon, carp, herring); the improvement of the biotechnological artificial breeding of sturgeon and Kur salmon; assessment of damage to fish stocks, ecotoxicological testing of water and participation in the Commission on Aquatic Bioresources of the Caspian Sea for the conservation and restoration of commercial stocks of sturgeons, sprats and other commercial resources in the Caspian basin. The Institute is involved in the implementation of innovative programmes studying sources of raw materials for domestic and international fisheries, research into new methods and equipment for fishery, fishing and aquaculture, into equipment and production technology for fish products, the development of freshwater aquaculture and mariculture and information systems for fisheries.

VoA: How well-developed is recreational fishing and what is happening about poaching in Azerbaijan?

Deputy Minister Hajiyev: Recreational fishing in Azerbaijan is regulated by the law ‘On Fishing’, adopted in 1998. Amateur fishers are members of the Hunters and Fishermen Society, and may engage in fishing in designated areas and at times permitted by the law. Fishing is prohibited during spawning migration. Recreational fishing for sturgeon and salmon is prohibited. The number of anglers has risen in recent years. The Department of Reproduction and Conservation of Living Aquatic Resources at the Ministry of Ecology and Natural Resources has a service dedicated to the protection of fish stocks. Fishing seasons, equipment and location; the species of fish caught; fishing quota compliance etc. are all controlled and regulated by the Department of Fisheries. Any violation of the rules is deemed a violation of fishing regulations and is punishable by law. Poachers are fishermen who do not have permission (fishing licence) to fish in accordance with the rules issued by the above department. There were more than 800 violations of fishing regulations and instances of poaching in the republic in 2011. Steps taken to protect biological resources in 2011 resulted in the detection of 130 violations of fisheries legislation, 121 persons were prosecuted, including 87 who faced criminal proceedings. 51 boats, 4,750 metres of netting, 3 motor boats and 2,200 kg of various species of fish were confiscated. Fines imposed in this period amounted to about 100,000 manats.

VoA: There was a proposal to deepen the mouth of the Kur River, improve its passage to the sea and return the Sturgeon River to its former glory. Has this problem been solved? 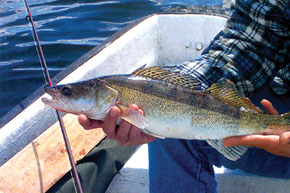 Deputy Minister Hajiyev: Project KASPEKO is underway and continuing. Studies were carried out of the existing spawning grounds, covering an area of about 340 hectares, in the Kur and Araz rivers. Measures were developed to restore fish breeding and hydro-engineering work is being prepared. Work continues on the Kur River delta to dredge and transform the delta in protected areas. Units of the Ministry for Emergency Situations are working now on the mouth of the Kur, dredging and restoring river navigation; this will also assist in fishery management.

VoA: What are the current total production volumes? Fish production from the Caspian and the Kur fell from 41 tons per year in 1990 to 21 tons in 1999. Have you been able to raise production levels?

Deputy Minister Hajiyev: Figures from the State Statistics Committee indicate that the fish catch was 40 tons in the year 2001, including commodity farming and recreational fishing. However, as we know, marine fisheries stocks are no more than 1,000 tons, due to the catastrophic decline of food supply, ie. sprats, following biological contamination. The scarcity of anchovy and sprat in the sea made fish production unprofitable and private companies stopped fishing. The sturgeon, as you know, has not been fished for the last two years. The prospects for increasing fish production depend primarily on the development of mullet and herring stocks, as well as developing measures to combat mnemiopsis leidyi. However, none of this will return us to the previous position (70 thousand tons produced in the early 1980s). In line with global trends we need to engage in commodity fisheries – aquaculture - and there is huge potential for this in Azerbaijan. This is the only way to provide for people’s dietary requirements – 10.5 kg of fish per person. The Ministry is currently doing much work in collaboration with the Food and Agriculture Organization which will result in changes and amendments to the law ‘On Fishing’ reflecting the priorities of aquaculture.