The Domes of Karabakh 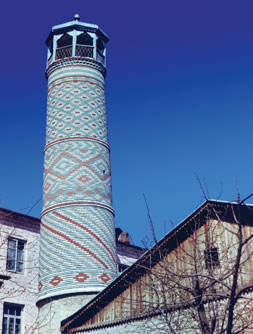 Research into Azerbaijani monuments carried out in the late 1930s spawned theories about different architectural schools across the region. The schools of Shirvan, Absheron, Nakhchivan, Tabriz, etc were studied and written about. However, the distinctive Karabakh school of architecture (especially that of the 19th century) was somewhat shamefully neglected.


After the death of Nadir shah in 1747 Azerbaĳan became a patchwork of khanates. One of them was the Karabakh khanate, whose immediate founder was Panah Ali Khan of the renowned Javanshir clan. Panah Ali Khan was a leader with an interest in developing his khanate and began with the building of Bayat castle near Barda, between 2 January and 22 November 1747.

However, Bayat seems to have been an early mistake – its position left it vulnerable to enemy attack – and it was soon abandoned. In the following year Panah Ali Khan had Tarnakut castle built in an area called Shahbulaq in Agdam.

He still felt uneasy, these were unstable times, and he decided to build slightly more extensively to achieve a pleasant environment and, most importantly, security. Thus, within a short period of time, a modest castle-cumtown appeared on majestic, thick-forested 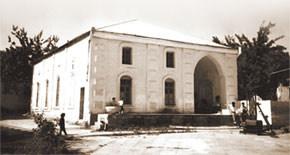 Obviously, the town had to be named in his honour – thus it became “Panahabad”. By order of the khan, people of different professions were brought from other regions of Azerbaĳan to build his new stronghold. Craftsmen (individuals and, later on, various groupings) came from Southern Azerbaĳan (now part of Iran) when they heard about the respect shown for their trade in Karabakh. This trend continued through the 19th and early 20th centuries.


Later studies show that the respect for crafts and craftsmen engendered by Panah Ali Khan was continued by his successors and passed on generously from generation to generation. It was the result of this tradition that, as the years went by the poets, writers, journalists, ashig and mugham singers, playwrights and musicians for which Karabakh is so treasured, developed their arts there.

Although these artists sometimes worked individually, they also led special assemblies and groups. Along with the literary and artistic assemblies in 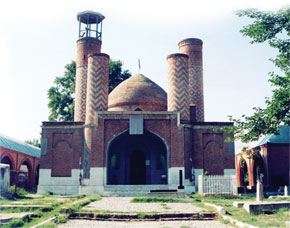 Barda. Sheikh Ibrahim Mosque (1868)
Karabakh, there were also groups of calligraphers, carvers and architects. The calligraphers were led by Karbalayi Safarali bey, the carvers by Mir Mohsun Navvab, and the architects and constructors (who arrived from Tabriz and then established their own architectural school in Karabakh) by the architect Karbalayi Safikhan Qarabagi.

Karbalayi Safikhan Qarabagi was born in the town of Ahar near Tabriz in 1817. At that time Tabriz was renowned for its school of architecture, which was highly influential in the development of oriental architecture. It was particularly noted for the construction of arches and domes with curvilinear coatings (also used in roofing and in general construction).


As a young architect, Safikhan was also a student of this architectural school. Sources record that he began working in Karabakh in the 1860s. The Imamzada mosque erected over Sheikh Ibrahim’s mausoleum in Barda is the first of his works known to us.

We know that while Safikhan conducted reconstruction work on the Imamzada mosque, he did original work on the Agdam mosque (1868-1870). The fact that Karbalayi Safikhan built that mosque and that Mahammad Sukuhi Tabrizi was responsible for decorative work to the its sanctuary (in1886) proves that Karbalayi Safikhan had not arrived in Karabakh alone. On the contrary, he had brought with him highly skilled craftsmen.

In this way, he gradually laid the foundations of his architectural legacy in Karabakh. Shusha’s beautiful environment delighted Safikhan, as it did many other craftsmen. This influenced him in his endeavours to further develop the town and explains why he chose Shusha as his place of permanent residence.

The complex of buildings about 150 metres north-east of Shusha’s central square – the Govhar Aga mosque, the madrasah (religious school), residential houses, shops and other buildings - was built by Safikhan 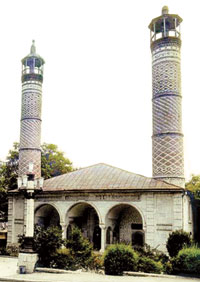 Shusha. Upper Govharagha Mosque (1883)
between 1870-80. He built the bathhouse and mosque in the village of Abdal-Gulabli in Agdam, the Haci Alakbar mosque, the bathhouse and the mill in Fuzuli town, and also the mosques and residential houses in the villages of Horadiz and Qocahmadli in the same region. Analysis of the architect’s working biography shows that he also carried out construction work outside Karabakh. Here, we should note especially the Tatarlar mosque he built in Odessa (Ukraine) in 1870 and the Qarabaglar mosque he built in Ashgabat (Turkmenistan) in the 1880s. All of this is graphically indicates the fact that Safikhan’s glory spread well beyond the boundaries of Karabakh.

Generally speaking, the minarets on mosques built by Karbalayi Safikhan differ from the minarets of other mosques in Azerbaĳan. The difference is that their cylindrical base does not narrow towards the top and the lofts that complete them do not appear separate from the main part of the mosques.

At the same time, his mosques have a special compositional form. Thus, characteristic of the architect’s work were octagonal stone pillars supporting arrow-shaped joint arches and covered domes, or the division of the interior of the mosque into sections, with special glassed galleries for women on the second floor. 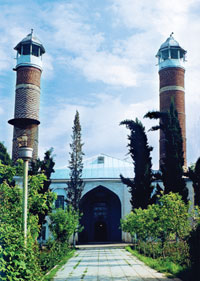 Agdam. Juma Mosque (1870)
mosques built after him. This is clearly seen in the villages of Dadali, Qaraxanbayli, Bahmanli and others in the Fuzuli region.

Checking the historical sequence of Safikhan Qarabagi’s working life, we note that the Haci Alakbar mosque, built from 1888-1889 in Qarabulaq – the present-day Fuzuli town - is one of his last works.

So far we have no information about- Karbalayi Safikhan’s origins. It is also a fact that a khan would never pick up stone to build something. I should also recall that the word “khan” at the end of the architect’s name represented danger to his relatives in the 1930s (during Stalin’s purges). At that time numerous of his projects were burned. However, we know that craftsmen who had unique talent and did beautiful work were given the name “khan” in Karabakh.

There must be a certain history behind the addition of the word “khan” to the end of architect Safi’s name. But there is no doubt at all that if the word was added to his name subsequently then this was because of the architecture that he created. There is no doubt that he received the name “Karbalayi” after visiting Karbala (a place of pilgrimage for Muslims) and the name “Qarabagi” after establishing his own architectural school in Karabakh.

The talented architect Karbalayi Safikhan Qarabagi played an important role in the history of Karabakh architecture and led his own architectural school through the second half of the 19th century. When restoring the minaret of the Saatli mosque, which he had once built in Shusha, he fell and died nine days after this incident, in 1910 – at the age of 93. The architect was buried in the Mirza Hasan cemetery in Shusha. 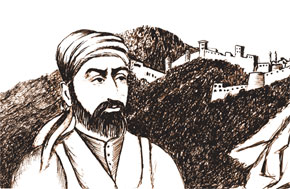 Architect Karbalayi Safikhan Qarabaghi (1817-1910). Picture by Rizvan Q.
Safikhan used the traditions of popular architecture with great skill and created his own special architectural school, incorporating local elements of architecture and accommodating the local environment and climate to adorn the beauty of his adopted home, Shusha.

We should note, finally, that in the 19th century European architectural styles were ubiquitous. They had a major impact on the architecture of many regions of Azerbaĳan but were not able to touch the architecture of Karabakh. This is due, in no small way, to the power and might of the work of Karbalayi Safikhan Qarabagi.