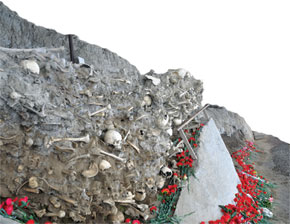 1 April. A day when humour and laughter rocks the world, including Azerbaijan. People play pranks, tell jokes, in short it is a day when people are happy and try their best to raise each other’s spirits.

1 April 2007 was an ordinary day. Work began on enlarging the stadium on the right bank of the Gudyalchay river, in the north of Quba city, north-west Azerbaijan. Digger driver Aladdin was given the task of flattening the small hill to the left of the stadium. Who would have thought that in fewer than 10 minutes Aladdin would discover evidence of a major crime? The digger had only cut into the ground a couple of times when human skulls and bones began to appear.

This was no joke and no one was laughing. The 1 April had revealed a dreadful crime committed in Quba in the last century… The results of the Quba slaughter, Armenian terrorism that had been discussed down the generations, had been uncovered. Excavation stopped. The stadium director immediately contacted the local municipality, who informed Baku. Soon afterwards an expeditionary group from the Institute of Archaeology and Ethnography of the Azerbaijani National Academy of Sciences arrived on the scene. A preliminary investigation made it clear that this was a mass grave.

A short excursion into history

Following the 1917 October Revolution in Russia, a Bolshevik-Dashnak faction headed by the ethnic Armenian Stepan Shahumyan, seized power in Baku province. Shahumyan had organized Bolsheviks and Armenian nationalists in opposition to Azerbaijanis. There were attacks and killings across most regions of Azerbaijan – Karabakh, Zengezur, Quba, Shusha, Goychay, Shemakha, Ganja, Nakhchivan, Neftchala….

Investigations revealed that in May 1918, as well as the bloodshed in Baku, Shahumyan had ordered a special punishment team north to Quba; it was led by Armenian general Amazasp. The team not only killed thousands of innocent people, they buried many of them alive.

The slaughter continued from 1-14 May. Amazasp camped in the town’s Tsarist Russian military base. On 1 May, as soon as the team arrived, it went into action across the whole Quba province (an area that includes the modern day regions of Quba, Qusar, Khachmaz and Devechi). 122 villages were burned, 26 mosques destroyed and 16,000 people killed. Over 4,000 people were killed in Quba city alone. The victims were not only Azerbaijani, they also included Lezghis, Griz and Jews.

When it was proven that the mass grave was from that campaign of slaughter we contacted members of the Israeli Knesset to add the subject to the agenda. Documentation on the killing of Jews by Armenians has already been presented to the US Senate. It establishes that 101 Jewish families were killed during the 1918 events…

‘Drive to the Quba grave’, we ask the taxi driver. He starts the car without a moment’s hesitation and offers his own opinion:

As a matter of fact, there were many slaughters. Many were killed. I have been watching it; they have discovered one or two places so far. If they go a little further they will find that there is a huge burial ground under the whole stadium.

The taxi driver doesn’t want to go all the way. He stops about 50 metres short, and kindly asks me to go the rest of the way by myself. ‘When I see those bones and skulls, I feel terrible for days’, he says in explanation.

I enter the former stadium area. They are going to build a museum complex here. President Ilham Aliyev ordered the building when he visited the area. Construction of the Genocide Memorial Complex is due for completion this summer. 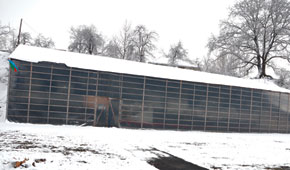 Nizami, a member of the archaeological expeditionary group, is our guide. He says that an anthropological examination of the bones conducted by the expedition had established that the bones belonged to Muslims. This grave is only part of the consequences of the 1918 massacre.

He believes it is wrong to call the place in which human bones have been revealed a cemetery, because they were found piled on top of one other. They were in two pits along the river bank. The larger pit is 5 metres in diameter, the other is 2.5 metres across and they are 2 metres apart. The skeletons of hundreds of people were found in the larger pit. The fact that skeletons were not found intact shows that the bodies had been dumped here after being cut in half. There are several unopened pits. Only God knows what we are to find there.

Another member of the expedition, candidate of historical science Asgar Aliyev, says that among the many bones, including those of children, there were only 35 complete skeletons. No belongings (hair, clothing, possessions) were found.

The time of death was established during investigations. According to the archaeologist, a process of cementation begins in ancient bones, however the bones discovered in Quba still contained moisture, which establishes the time of death at approximately 80-90 years ago. The initial investigation of the area around the pit led to a belief that the massacre did not take place there. The Armenians probably assembled the bodies on the river bank hoping that the water would wash away evidence of the massacre.

By the way, investigations indicated that this was an indiscriminate massacre. At first only 55 skeletons were discovered here, across an area of 500 square metres and consisting of two pits, one 4 metres deep, the other 2 metres. 24 of the skeletons belonged to children aged 8-14 years old. 23 skeletons belonged to women.

From the notes of a soldier of the Caucasus Islam army who was in Azerbaijan in 1918:

The Armenians have burned all Muslim villages in this vicinity and killed and destroyed their populations. Armenians showed mercy to no one here. They destroyed every one of them in the hay-lofts. They also shot all the animals. There are carcasses of thousands of animals. It is impossible not to cry with blood after witnessing this massacre. These days are impossible to forget. It is well known that the Armenians that work in our motherland and create different disturbances every day in order to destroy the Muslims and establish an Armenian government in the East have tragically oppressed the Muslims and destroyed Muslim villages and settlements. One cannot imagine the horror committed. They have beheaded many children, taken the livers from bodies and hung them on the walls. There were different body parts, hands and heads hanging on the walls. I see no need to write at length about the tragedy inflicted by the Armenians on the Muslims. Muslims should never forget.

The reports of a German named Brandner who visited Baku on 7 May 1918 are another source. One includes the following information about the massacres carried out in Baku and Quba:

Baku and the provinces around it have been in the hands of the Bolsheviks since 3 April. Azerbaijanis have lost all contact with Tbilisi and they have a regular troop of 400-500 people. In contrast, since January the Armenians have had one and the Bolsheviks two and a half regiments. The massacre began on 31 March and continued until May in the provinces. Approximately 12,000 people died. Some houses were burned down and some were destroyed by gunfire. I have several photographs that document the fact that Armenians carried out this slaughter. It may be considered an Azerbaijani massacre. The Azerbaijanis who could not escape were killed in their homes by Armenians. The Armenians would cut the bellies of pregnant women and take out the child. Children also had their share during this massacre.

Although this brutal policy of the Armenian-Bolshevik groupings in Azerbaijan was executed by people of different nationalities, the Soviet regime tried to conceal the barbarities from the international community. However, as always, time reveals all. The bodies found in Quba are the evidence. 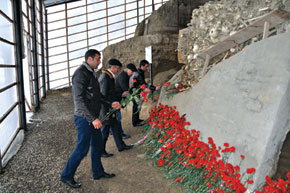 Qahraman Aghayev, leading scientist at the Archaeology and Ethnography Institute of the Academy of Sciences

He says that initial investigations established that these were local people killed by Armenian armed forces in 1918.

After the local people were killed away from here, they were brought here and the bodies were piled into pits dug on the banks of the river so that the floods would cover all the traces. Since the corpses did not all fit into the first pit, they dug a second one. The historic parameters, evidence from elders and archive documents prove that these bones belong to local residents who fell victim to massacres committed by Armenian armed forces in the early 20th century.

the overall area covered by the mass grave on the bank of the Qudyalchay is 500 square metres. There are certain differences between the skulls in the pits and limbs discovered in the ditches. Most of the bones here have shrunk and withered. Local people also confirm our doubts. The people who were thrown into the pits were brought here after being held under steam in the bathhouse located in the area. We have information that confirms this.

According to the archaeologist, all the bodies found in the grave show that the people were killed with blunt instruments and with inhuman cruelty. As a result, it is only possible to establish the number of bodies by counting the skulls. The bodies belong to people of other ethnic groups settled in the territory, as well as to Azerbaijanis living in Quba. Thus the massacres were carried out regardless of nationality, age or gender.

We were also told that some skulls and other bones were taken to Baku. They have to be specially treated so that they do not rot.

The site has now been covered with plastic to protect it from the rain and sun. A museum complex will be built here. However, as already noted, the area might expand because several pits have not yet been opened. No one knows what secrets and savagery are hidden in those pits. Excavation has been halted temporarily because of weather conditions. Work will continue later.

Everything possible is being done to relay this bitter truth to visitors to Azerbaijan and to historians and the wider international community. When we were there, several people we did not know visited the site to lay flowers. It has become a site to visit, for the people of Quba and for everyone who visits the town.

Times change but the truth remains and the crime has been revealed. The Quba grave has exposed this atrocity to all.