Fiona Maclachlan reports from the Azerbaijan Marquee at Windsor 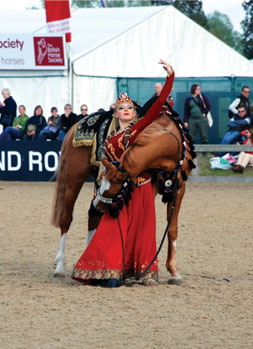 Olga Kryukova and Golden Boy II take a bow
Azerbaijan had a new neighbour at the UK´s Royal Windsor Horse Show, held in May this year. Our hospitality tents were adjacent. We could smell their frankincense and hear their pipes (like Scottish bagpipes). But whereas Oman had brought over a hundred horses and many more Omanis to the horse show, Azerbaijan brought just three horses and their riders.

But these horses were the locally famed but generally little known Karabakh horses. A source of pride in Azerbaijan, their rarity, together with the certain knowledge that these are the very best of horses, ensures an almost fabled reputation. I had first heard about the Karabakh horses some years ago through reading the novel ´Ali and Nino´ by Kurban Said, a highly recommended read. So here were the legendary horses in the flesh, coming to the UK, so exciting! I couldn´t wait to welcome them after their 3 week road journey.

Helping at the Azerbaijani hospitality tent, I had a few missions forefront in my mind. One of course was to introduce the Karabakh horse to a wider audience (and where better to do this?).

Another was to promote and increase awareness of Azerbaijan because even in this most elite of crowds, hardly anyone knew the most basic things about Azerbaijan. Many people struggled to pronounce the name of the country, so we soon got that right. And then Where is it? And so we soon got that right too. After that we were on a roll and our enthusiasm for such a wonderful country led to requests for tourist information and most particularly for horse-riding holidays. I regret not keeping a list of names and email addresses of all those interested in travelling to Azerbaijan to ride horses.

Furthermore, the enthusiasm is such that several people, all experts in horse trekking in far flung places, expressed keen interest in running trekking holidays.

Many visitors to the tent were amazed at other Azerbaijani attractions. For example the Yanar Dagh, burning mountain, had huge appeal. And I remember one lady, when I described the cave paintings at Gobustan, asked what might be nearby. I expect nothing, she said with a shrug, after all, it´s not that I expect anything. And so I told her about the adjacent mud volcanoes and her eyes were popping out of her head. I think she was planning to book the next flight.

It was enormous fun to be telling our enthusiastic audience about Azerbaijan. Not for one minute did we run out of something to say, a story to tell, an attraction to describe. 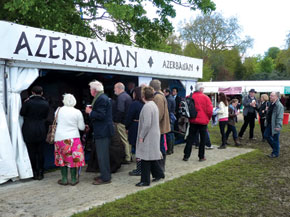 Tell me, people would say, what is the architecture like in Baku? A question like that could keep us going a long time.

Other questions included ones about the countryside, what is it like outside Baku? And again we could spend a long time answering.

Our guests enjoyed their stay with its traditional hospitality. We served Azerbaijani tea with pakhlava and shekerbura. I lost count of the people who asked if they could buy Azerchay tea in UK supermarkets. I even lost count of the number who asked if we had anything else because they did not like black tea and yet, after a glass of Azerchay, they became big fans of Azerbaijan´s delicious black tea from Lenkeran. We served way over a thousand cups of tea from a crowd-drawing samovar.

Sitting on chairs, softened by small Azerbaijani carpets, was another comfort. Weary guests were advised that if they felt a little tired then they would feel much better after a rest sitting on a chair covered with an Azerbaijani carpet. Not one disagreed. A group of four Azerbaijani musicians performed some hauntingly beautiful mugham and folk music from time to time throughout the Horse Show. This attracted a great deal of attention and I did chuckle on the rainy days to see people even sheltering under the canopy of a nearby refreshment tent just to hear our musicians. In between times our most popular display was a film (actually three in succession) showing many aspects of Azerbaijan but most particularly excerpts from a game of chovgan, a national game typical of the Middle Eastern origins of the polo game which is now played throughout the equestrian world.

Now this was a horse show and not a tourism exhibition, and yet I was pleased when one guest explained that they had seen people drinking tea and had popped in for a little refreshment. We talked with him about Azerbaijan and after a while he told me he was completely amazed. I came in for tea, he explained, and I have discovered a country. And he told his wife that they would go to Azerbaijan for their next holiday.

I am a doctor, he said, and my wife is a dentist. We have money enough and now we are older we have plenty of time. And I have decided that I would like to go to Azerbaijan for my next holiday. I will take our daughter too, she is a linguist and she will enjoy travelling in Azerbaijan as well.

At moments like this I realise how pleasurable it is to describe Azerbaijan to people. Everybody is interested to see the Caucasus Mountains, to see the forests, the unspoilt nature, the wildlife and so on. A mention of bears and they are looking at flight schedules. They want to come here to explore, to drink tea, to meet Azerbaijani people, to visit an ancient silk route, to see the fire, to eat Azerbaijani cuisine and to drink more tea and talk some more. 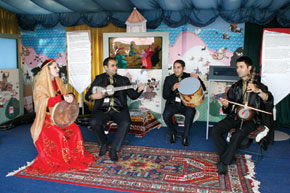 But most often, I asked guests as they arrived in the tent, do you know about the Karabakh horses? Have you heard about them? I explain how beautiful they are, how fast, how strong, not so tall, often beautifully golden-coloured. And I explain how special they are to Azerbaijani people,
Look out for them, I command, during the pageant in the evenings. Many countries have brought many horses, and the pageant is a truly amazing show. But when it comes to the Karabakh horses, we brought only three. A rare breed, truly special and truly amazing.

One gentleman who had helped organise the pageant, came and almost whispered to me, We are very impressed with the Azerbaijani part of the pageant. This is a very British way of saying that Azerbaijan put on the best of performances, and behaved well behind scenes too. He enjoyed our hospitality too.

Another time I took a few special guests to meet our Azerbaijani horses in the stable. A lady, obviously in charge at the stables, took me to one side to explain that the horses had been really quite disturbed when they arrived after their long journey, that they were not very happy and so on.

But, she went on, your Azerbaijani people have worked with them extremely well, and I was so pleased to see how quickly the horses responded to their care. And now look at them, they are absolutely fine here.

I was able to take photos of the horses in their stables, against the backdrop of Windsor Castle.

And so it seems that Azerbaijan has been a huge hit at the Royal Windsor Horse Show, but most importantly, the real stars were the Karabakh Horses.

I wondered, did anyone at the show remember anything about the Karabakh horse called Zaman that was given to Her Majesty the Queen in 1956 as a gift from the Soviet Union? So as well as asking if anyone had heard about Karabakh horses in general, I asked about this horse in particular.

An unlikely chain of events led to a lady called Jo almost running to the tent, bursting with enthusiasm and memories.

I love horses, I have always had horses, and years and years ago I was driving past the same field every day and it had a beautiful horse in it. But this horse wasn´t being ridden or especially well looked after and yet it was an incredible animal. I made enquiries and managed to buy it. I found out that it was called Kerrygold and it had been won in a butter competition, hence the name. It was the offspring of a stallion which had come from Russia which had been given to the Queen. The horse´s real name was Zillah. To begin with I couldn´t ride it and even though I am very good with horses I had to work with it for a long time. At last I could ride her and she was truly amazing, the best horse I have ever ridden. When I was on her back it was as if I was floating. Eventually I sold her for a lot more money than I paid for her, because by now everyone could see what a fine horse she was. 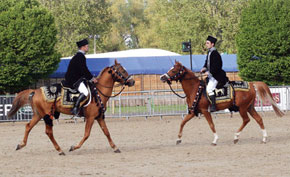 Qafaqli and Golden Boy I at a Windsor work-out

I´m waiting to hear from Jo now; she has promised me photos and information so that we can substantiate her story.

Jo came because she had overheard other ladies talking about the horse and in the end they all came to the tent, and now there is a group of six ladies who ´connected´ over a Karabakh horse from 1956.

Another lady, a doctor, told me amazing stories of riding horses which came from the USSR.

They gave one to the Queen, she said, but about fifty came. There was one in Richmond Park for a while. I rode one of them, she explained, and it was the most incredible horse I have ever ridden, so smooth, so fast. I remember it very well. Many of the horses which came suffered from emphysema, they all did. I remember, she went on, that the horse stud had to add a new colour to their books - it was Old Gold.

So many stories. I also met a lady who was passionate about the colour which Karabakh horses can have.

Some of the Turkmen horses (Akhal Teke) have the sheen on their coat, and we have discovered it is not the actual colour; it is the structure of the hair at the molecular level which causes the amazing iridescence. There are ongoing studies in the US, she said, I will send you details.

All these people truly connect with and love the Azerbaijani Karabakh horse.

Is it any wonder that these three animals, coming to the Royal Windsor Horse Show, caused so many people to connect, to make new friends, and most of all, to discover Azerbaijan? Not when we are talking about Karabakh horses. The legend lives on.