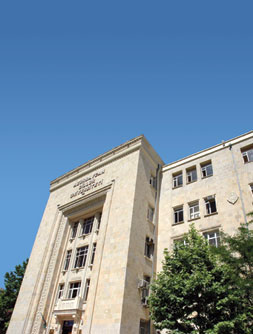 The Azerbaijan University of Languages
Throughout history, translators and interpreters have been vital links in contacts between nations. In the past, merchants, travellers and sometimes prisoners of war who had lived for some time in a country and learned the language, were often used as translators. And because people living in border areas usually knew at least two languages, they were often employed by merchants.

In the Middle Ages, Arabic and Persian were taught in madrasas (Islamic religious schools) in Azerbaijan and when the Aghgoyunlu state (1468-1501) established relations with some European countries then the services of those bilingual merchants, travellers and ambassadors were called upon as interpreters.

In the 19th century, with the occupation of the northern areas of Azerbaijan by the Russian Empire, the number of Azerbaijanis travelling to Europe and learning mainly the French language began to increase. Naturally, the development of Baku’s oil industry encouraged further interest in other languages. However, the systematic teaching of foreign languages, especially English, in Azerbaijan dates only from the late 1920s. The People’s Education Commissariat launched English language education in 1925-26.

The Baku People’s Education Institute, responsible for the professional development of teaching staff in Baku and for the supply of qualified staff to schools, actually first organised courses in 1923 for teachers wanting to learn English as well as other European languages. Graduates received a certificate. The design of teaching programmes took students’ ages into account and focused mainly on correct pronunciation and the development of reading and writing skills. The programme for the middle-age group of students was designed to achieve the effective reading and translation of simple articles, older graduates were expected to be able to speak English, write essays independently, translate etc.

The Republic’s People’s Education Commissariat prioritised the teaching of one foreign language in all faculties of higher education institutions. At a meeting on 26 May 1928, it ruled that English should be an obligatory subject in the University’s faculty of Oriental Studies.

Demand for foreign language experts increased in the USSR in the 1920s and 30s as it established diplomatic relations with a number of countries. From 1929-1932, improved relations with Great Britain led to the strengthening of economic relations. Of course, this also affected Azerbaijan as Baku was one of the main industrial centres of the Soviet Union. Increasing numbers of tourists and foreign construction experts arriving in the USSR, including Baku, pushed the learning of English to the fore. It was impossible to fully develop economic and political relations between the countries without speakers of foreign languages. The Trade Unions and the Komsomol (Soviet Youth organization – ed.) Committee organized short and 2-3 year courses. 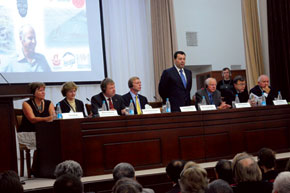 Thor Heyerdahl, renowned Norwegian traveller, at a meeting with students of the university

The Central Committee of the Communist Party adopted the Curriculum and Work Regulations for Primary and Secondary Schools on 25 August 1932, stipulating the teaching of a foreign language to secondary school students. This initiative fostered better educated, students with a broader world vision. From this time onwards the number of students learning a foreign language rose year by year. By 1933-34, postgraduate students at the Pedagogical Institute were having 40-60 academic hours of foreign language lessons per semester.

The rise of foreign language education took it into the press. The newspaper Pravda, official organ of the Communist Party published an article on 18 December 1934 stating the need for translators and interpreters for international conferences and contacts with businessmen and tourists.

Technical equipment imported from the West was usually accompanied by instructions in English, so the need for knowledge of the language was not confined to the educational sector. Pravda spelled it out in another article To Learn Foreign Languages that serious study and teaching of foreign languages was required.

The People’s Education Commissariat applied itself to improving the teaching of foreign languages in Azerbaijan’s regions of Azerbaijan which had until then been largely a matter of fragmented private enterprise.

The proposal was to create a foreign language division in the Social Studies and Literature faculty of the Pedagogical Institute and offer financial incentives to language teachers.

By 1936-37 there was an independent Department of Foreign Languages within the Institute. Otto Neff, German by origin, was appointed Head of the Department; German was the preferred language at the time. At the end of 1936, textbooks, manuals and dictionaries in German, English and French were purchased for the Institute’s library, even though there were no English classes were on the curriculum because of a lack of teachers.

In 1937, another independent department of foreign languages opened at the Azerbaijan State University, it had to share teachers with the Pedagogical Institute. As the USSR’s foreign relations expanded the language issue became ever more urgent and on 1 March 1937, a foreign languages division was established by the People’s Education Commissariat. In the following academic year, German, French and English were in academic programmes in that order of importance. In November 1937, the state printing house published an English language text book for the 5th grade, in Azerbaijani and an Azerbaijani-English dictionary followed. 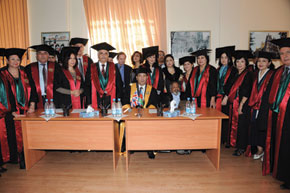 Learning English during the period of repression

We have already referred to the lack of human resources in education in the 1930s and this was exacerbated, as in every other sphere of life, by the period of political repression. Many Azerbaijani intellectuals were labelled panturkist, panislamist, antibolshevik or antisoviet, and liquidated or sent to exile. In these circumstances foreign language experts were drawn from other nations and conducted the education process mainly in Russian. Thus later there was a great need to re-establish local expertise.

On 9 October 1937, following an appeal from the People’s Education Commissariat, the Azerbaijan SSR Soviet decided to open a foreign languages faculty at the Pedagogical Institute with places for 200 students. By June 1939 a Department of English Language had been established. In 1937-38, 59 students had been enrolled in the English language department of the of foreign languages faculty, one of them was to become a well-known Azerbaijani historian: Sarah Balabey gizi Salamova-Ashurbeyli.

The Azerbaijan State University opened a department of Western European languages in 1939-40 and foreign languages were also taught at the Industrial Institute.

English to the fore

The outbreak of World War II disrupted education but accelerated the demand for foreign language specialists and resources were concentrated at the Azerbaijan State University. The interest continued after the war and, finally, on 28 June 1948 the Azerbaijan SSR’s Ministry of Education ordered the opening of a Pedagogical Institute of Foreign Languages in Baku and an English Language faculty was established, reflecting the now prime demand for English. 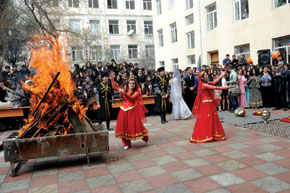 English is now taught in all secondary education schools, lyceums and colleges, as well as in the higher education institutions of independent Azerbaijan. In a number of universities there are faculties in which the education process is conducted totally in English. There are student exchange agreements between Azerbaijani universities, led by the University of Languages and those in the US and UK..

The Azerbaijan Pedagogical Institute of Foreign Languages became the Azerbaijan State Institute of Languages in 1992; then its profile was broadened and it has been the Azerbaijan University of Languages (AUL) since 13 June 2000. AUL was the first state university to apply the Bologna system of higher education. The University’s English language faculties I and II mainly train future teachers. There is a Faculty of Translation and also a Faculty of Regional Studies and International Relations, in which students prepare for careers in diplomacy and similar specialisms.

Graduates of the University of Languages have continued their education and acquired masters’ degrees at many of the world’s universities, studying in English. An agreement with the University of Essex enables students to study two years in Baku and two years in England. There are US citizens among the students working towards masters’ degrees at the University. Professors lecturing in American studies, Scandinavian studies and Indian studies include experts invited from those countries to deliver lectures in English. Summer Courses are organized each year and they attract students from European and American countries.

AUL also has some famous alumni. Azerbaijan’s representative in the Eurovision song contest in 2009, Aysel Teymurzade, who took a creditable third place, is a graduate of the University of Languages.

About the Author: Gorkhmaz Mustafayev PhD in History, Chief Instructor at the Azerbaijan University of Languages.